Bernardino Leon: ′Libyans need international help to solve the crisis′ | World | Breaking news and perspectives from around the globe | DW | 07.08.2014

The Libyan parliament has threatened to act against warring militias that don't abide by its call for a ceasefire. Now, the EU Special Representative for Libya told DW that Europe needs to help stabilize the country. 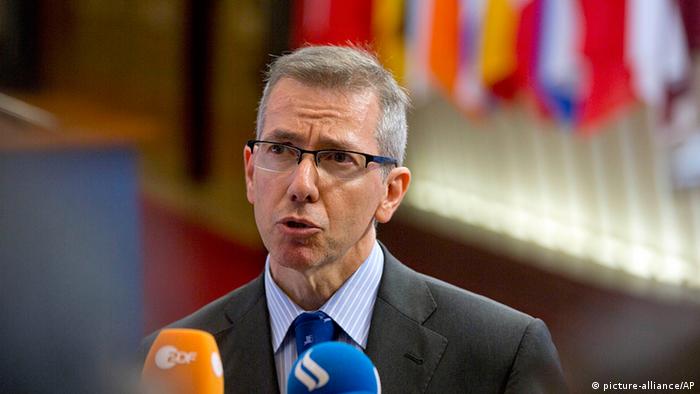 Deutsche Welle: Libya is currently in the grips of perhaps its worst crisis since the toppling of Moammar Gadhafi and his regime. What went wrong strategically in Libya after the ouster of Gadhafi that has led to the current crisis the country is facing now?

Bernardino Leon: We should talk about the different factors and conflicting views of the different stake holders. On the one hand, the militias didn't trust the rest of the institutions and decided not to integrate, disarm or disband which is one of the key factors that complicate things today. But not the only one. The institutions, maybe because of a lack of tradition and democratic debate, have conflicting views. And problems between the government and the parliament in the past have been quite serious. Probably the lack of a tradition and political debate and lack of institutions that were eliminated by the Gadhafi regime have led us to the situation that we have today.

The Europeans took the lead in helping topple Gaddafi and his regime. What is the EU's responsibility to Libya now?

Libyans don't seem to be able to solve this crisis by themselves and they will need the support of the international community. There are several problems which are very serious. One is lack of border control. Libya is a huge country and even if the state machinery was working in full, it would still be a challenge to control four thousand kilometers of borders in remote desert areas. This is why we are having migration challenges.

A second problem is terrorism. The lack of control has allowed members of al Qaeda and other organizations affiliated with al Qaeda to enter the country. Today we have a few hundred, if not a few thousand, members of al Qaeda in Libya and this is something we have to solve. There is not only fighting in Tripoli around the airport, between the Misrata and Zintan militias, there is also a conflict in the east between a former general of the Gadhafi regime, General Khalifa Hafter, and jihadist groups. All of this has to be addressed if we want to overcome the current crisis.

Having said that, what can the EU do to help keep Libya from falling into further chaos?

We are in permanent contact with the different parties. The immediate need is to broker a ceasefire and this is something the EU is doing with the United Nations. UNSMIL (the UN Special Mission in Libya) has the primary responsibility in Libya, and we are supporting their efforts. They have an excellent team on the ground which is working very hard.

We are also coordinating a group of European envoys from Germany, Italy, Spain, the UK, France and Malta along with envoys from the United States, Turkey, and institutions like the Arab League and the African Union to try to convince the people fighting on the ground to agree to a ceasefire. Hopefully we are not far from achieving this possibility. Immediately, we will have to work on a political agreement between the militias so they leave Tripoli and the airport. It's crucial to return to the political process. The new parliament has met. It's very important that it is inclusive and a place where political representatives can cooperate and not fight. A unity government is the only solution for the country.

We have seen this scenario before in Afghanistan and in Iraq. Was the European Union along with other Western powers naive to think that toppling another dictator and oppressive regime would simply lead to democracy?

We knew it was going to be extremely difficult. The reading of what is going on in the region is more complex than just saying that these countries, without a dictatorship or a strong man holding it together, will disintegrate. It's not that. We have new factors that are complicating things. First of all, in the case of Libya and also to some extent in the case of Syria, jihadist groups are taking over and moving in a very active way. And they are gaining influence. This is something we have to tackle.

We also have conflicts between the different international players that have an influence in the region. This is something we have to address. Then there is the economic crisis which is making life difficult in the Sahel which was already experiencing difficulties. So we were not naive. We knew it was going to be extremely difficult.

How long will it take to achieve this Western vision of democracy in Libya?

I know it's difficult to speak about hope in such circumstances. There is a real risk of a spillover and losing control of Libya, but I would like to end this interview with a touch of hope. Even amid the fighting, the new parliament has met and a new constitution is being drafted. So not everything is negative.

There are some positive developments. And Libyans want to have a peaceful and democratic state. I wouldn't call it a "Western vision." I think it's a Libyan vision. And the Libyans want their state to be democratic and inclusive. This is still a possibility. Obviously it will take years and with a lot of effort, but it is possible and this is what we are trying to do now with European support.

The interview was conducted by Meggin Leigh.

Newly elected Libyan parliament has held its first official session in the city of Tobruk as militias continue to fight over the north African country’s oil-rich towns. The meeting was boycotted by pro-Islamist members. (04.08.2014)

The biggest threat at the Libyan fuel tank fire is the liquefied petroleum gas, which is in pressured vessels. International fuel fire expert Niall Ramsden talks us through the worst-case scenario. (31.07.2014)