The leader of Berlin's Jewish community said on Thursday that an attack on a Jewish nursery school which was daubed with swastikas showed anti-Semitism was still a threat. 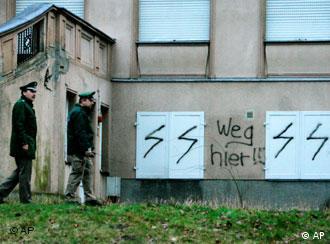 Gideon Joffe issued the warning at a prayer service held to protest against the attack in which "Jews get out" was sprayed on a wall and a smoke flare was thrown into the unoccupied building in western Berlin at the weekend. There were no injuries but the nursery was damaged by fire.

He said the attack showed that anti-Semitism was not a thing of the past in the city where the Nazis planned the extermination of European Jewry more than 60 years ago. Six million Jews were killed in the Holocaust.

"I invite all those Germans who say they want an end to the debate about the Nazi past to wear the kippah (skullcap) or a Star of David so they can experience the anti-Semitism that German Jews are confronted with on a daily basis," Joffe said.

Interior Minister Wolfgang Schäuble attended the service to express the government's condemnation of the attack.

"A line has been crossed"

Chancellor Angela Merkel said in a letter to Rabbi Yehuda Teichtal, the head of the educational foundation that runs the school, that "every attack on a Jewish building is an attack on our democracy." 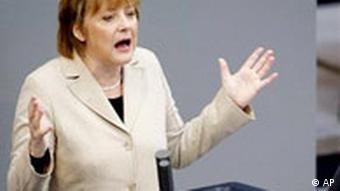 Chancellor Merkel said she felt "dismay" and "disgust" at the attack

"We will take care of the living and growing Jewish community in Germany and in this city now and in the future," Merkel wrote, adding she felt "dismay" and "disgust."

The chancellor vowed that the still unidentified perpetrators of the attack would be caught.

Stephan Kramer, general secretary of the Central Council of Jews in Germany, said he was alarmed by growth in anti-Semitism.

"The fact that the attack was aimed at children shows a line has been crossed," he said. "We're seeing inhibitions against these sort of crimes disappearing in Germany."

German authorities recorded more than 12,000 far-right crimes, including 726 acts of violence, in the first eight months of 2006, representing a 20 percent rise on the same period in 2005.

Unknown perpetrators have attacked and vandalized a Jewish nursery school in the German capital. The Jewish community in Berlin is now calling on Germans to join them in a prayer service on Thursday. (28.02.2007)

The Central Council of Jews in Germany has called for the country's Nazi history to be taught as a separate subject. But teachers' representatives remain skeptical. (04.07.2006)