It gathered Hollywood stars in Berlin's post-war ruins, offended the US during the Vietnam War, and brought glamour to the city's greyest month. The Berlinale celebrates six decades of contention - and good film. 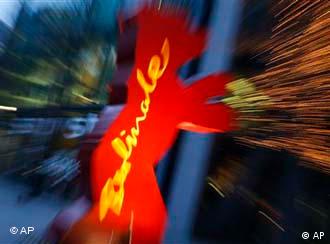 In June 1951, large parts of Berlin were still piles of rubble, and the Federal Republic of Germany was barely two years old. In this bleak setting, in the unfashionable western district of Steglitz, the first Berlin film festival celebrated its opening with Alfred Hitchcock's movie "Rebecca." The spectacular Oscar-winning melodrama, one of the biggest films produced by Hollywood during the war, was already eleven years old, but the film's star Joan Fontaine graced the event. The Berliners loved it.

In the decade following, Fontaine was followed by a herd of studio-era giants - Sophia Loren, Henry Fonda, Errol Flynn, Cary Grant, Rita Hayworth and others - who came to make the Berlin festival into an A-list event. Like post-war Berlin, the Berlinale owes a lot to the United States, and this was a kind of Marshall Plan of glamour. The western allies were rehabilitating the former capital of Nazi Germany in the best way they knew how - with show business. 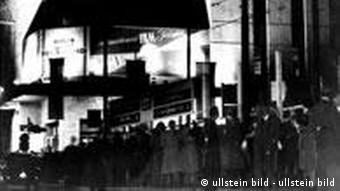 There were long lines even at the first Berlinale in 1951

But Oscar Martay, the officer of the occupying US military government credited as the initiator of the festival, was at least as interested in reviving Germany's proud cinematic tradition as in introducing American popular culture. The first festival was also a popular success among Berliners, with ceremonies and events sold out in venues across the city, and a fireworks display as a closing spectacle.

But despite the early presence of Hollywood, the Berlinale did not become an "A-festival," or a festival with an international competition accredited by the International Federation of Film Producers Associations (FIAPF), until 1955. This was when the Golden Bear award was first handed out by an invited international jury of film professionals. Until then, the competition had been decided by a public ballot, in keeping with its democratic, populist origin. Its rise to A-festival status promoted it to the league of serious film events, alongside Cannes and Venice.

Defiance in the sixties

Even in its relatively mainstream early years, the Berlinale was marked by a spirit of political defiance. For a long time it was the only A-festival to take place in a major capital city, and it soon found itself in the middle of a nascent global conflict. At the third Berlinale in 1953, Gary Cooper used the festival as a platform to denounce Joe McCarthy's anti-communist repression at home. Cooper is also said to have wandered around Berlin to witness July's mass demonstrations against the communist regime. (Until 1978 the festival took place in the summer.)

As the festival developed into the 1960s, it grew independent of its American roots, and became a showcase for the surging avant-garde in western Europe. Jean-Luc Godard, Michelangelo Antonioni and Roman Polanski all won Gold or Silver Bears in the decade. But this shift towards social commentary and artistic complexity brought with it a crisis of confidence. The conservative press was uninterested in artistic ambition, and missed the Hollywood prestige. There were also budget problems and audiences dwindled, not least of course because of the building of the Berlin Wall in 1961.

As the Cold War escalated, it directly affected film selection. The festival was still state-run, and political pressures meant that few films from the eastern bloc made it into the program. This was partly relieved in 1967, when the festival became a private company, though still with state backing. Diplomatic concerns could be circumvented, and films from socialist countries were once again invited, with the exception of East Germany. While politics continued to undermine the directors' authority, at least a sheen of artistic autonomy prevailed.

This newly-won independence may have come just in time. In 1968, the Cannes festival was disrupted by student protests raging across Europe, with influential French filmmakers showing solidarity with students. There were fears that the Berlinale would also be affected, but having been forewarned by the French example, the Berlin directors hastily organized podium discussions in order to bring the student movement into the forum of the festival.

But it was at the 1970 festival that the social upheavals of the decade came to a head at the festival, and almost ended the Berlinale. The German director Michael Verhoeven presented his Vietnam War film "O.K." in the competition, which depicted the true story of the rape and murder of a Vietnamese girl by US soldiers. The president of that year's jury, American director George Stevens, demanded that the film be thrown out of the competition for what he considered virulent anti-Americanism.

The festival directors came under massive criticism when they acceded to his wish, justifying their decision by citing an old FIAPF (International Federation of Film Producers Associations) guideline that said, "All film festivals should contribute to better understanding between nations." The jury erupted in bitter conflict amid accusations of censorship, and eventually disbanded, suspending the competition. Films in the rest of the festival were withdrawn in protest, and suspicions were voiced that governments had intervened to keep "O.K." off the screens.

The rage over Michael Verhoeven's (l.) film at the 1970 Berlinale forced the competition to be abandoned, and almost ended the festival

But the directors learned from this damaging timidity, and consistently protected the artist as other scandals followed throughout the 1970s, for example when in 1976, prints of Nagisa Oshima's "In the Realm of the Senses" were confiscated by the police as pornography, or Rainer Werner Fassbinder faced accusations of anti-Semitism in 1977. This penchant for scandal began to fix itself in the character of the festival.

The troubled relationship with the US became a recurring theme, particularly in the 1970s, when a new generation of Hollywood directors used the festival to showcase their darker images of the US. Not that this precluded the influence the Cold War continued to have: in 1979 the communist states withdrew all their films out of protest at the depiction of the Vietnam War in Michael Cimino's "The Deer Hunter."

Despite - or perhaps because of - these recurring scandals, the Berlinale has grown in stature to become what Quentin Tarantino calls the world's most "serious" film event. While Cannes and Venice command more prestige in the international film industry, the Berlinale's unique attachment to its city - it remains incredibly popular among local film-goers - its sprawling range of sections, and its history, have made it a unique event.

Film director Werner Herzog has made his home and his career in Hollywood. He'll soon head to his native Germany to serve as president of the jury for the Berlinale - where he'll watch far more films than he's used to. (04.02.2010)

Polanski film to premiere at the Berlinale

A new film by Roman Polanski, who's currently under house arrest in Switzerland, is set to premiere at the Berlinale in February. The news comes as the controversial director awaits possible extradition to the US. (15.12.2009)