It served as a symbol of communist power and remains a remarkable landmark of the now reunited city: the Fernsehturm on Alexanderplatz was inaugurated on October 3, 1969. With its iconic glittering sphere, the TV Tower looks over the once divided city that has been reunited since 1990. The 365-meter-high (1,198-foot-high) Fernsehturm on Alexander Platz in East Berlin was almost 220 meters taller than West Berlin's broadcasting tower, the Funkturm at the Berlin Exhibition Center.

When the Fernsehturm was completed in October 1969, it was the second-highest television tower in the world, right after the Ostankino in Moscow (537 meters). TV towers built afterwards, such as in Tokyo, Guangzhou, Toronto, Shanghai, Tehran or Kuala Lumpur, have since broken the records of the time.

The head of the East German state, Walter Ulbricht, inaugurated the building to mark the 20th anniversary of the foundation of the GDR, on October 3, 1969. The structure served as a demonstration of the power of the communist state. The tower was indeed a masterpiece of engineering — even West German experts were ready to admit that.

"Berlin's TV Tower on Alexanderplatz was the epitome of the East's Modernism," says architecture expert Ben Kaden. It was part of the modern ensemble spreading from Karl-Marx-Allee to Alexanderplatz. "It was about providing a visible manifestation of the superiority of socialism," adds Kaden.

Karl-Marx-Allee was a monumental socialist boulevard that served as a flagship of East Germany's building projects. 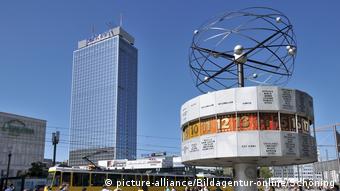 Another East German monument: The World Clock on Alexanderplatz

With its spectacular Urania World Clock, the GDR state also wanted to demonstrate how socialism also had time on its side. The world clock, featuring a sculptural rendering of the solar system, was also built on Alexanderplatz and inaugurated just a few days before the neighboring TV Tower, on September 30, 1969. Designed by Erich John, the clock displays the names of 148 major cities and the time of the day in those different locations.

The initial plan was to build the TV Tower in the Müggelbergen hills, but it would have then stood in the way of a lane of the central airport Schönefeld, so that idea was abandoned.

The concrete tower houses three elevators, pipes and many cables. An emergency staircase counts 936 steps. Every day, the elevators bring 4,500 people up to the top of the structure — 1.6 million a year.

The sphere features a revolving restaurant where tourists can discover the German capital from above. Since its construction, 60.9 million people have enjoyed the view from the Fernsehturm.

A picturesque novel — like a film, like a song. It's the first German urban novel. And a story of a man who is constantly landing flat on his face — until, one day, he finally gets it. (08.10.2018)

The symbol of Germany's capital was visited by some 60 million people. No one could have predicted such a success story for the Fernsehturm when its construction began on August 4, 1965, at Alexanderplatz. (04.08.2015)