The symbol of Germany's capital was visited by some 60 million people. No one could have predicted such a success story for the Fernsehturm when its construction began on August 4, 1965, at Alexanderplatz. 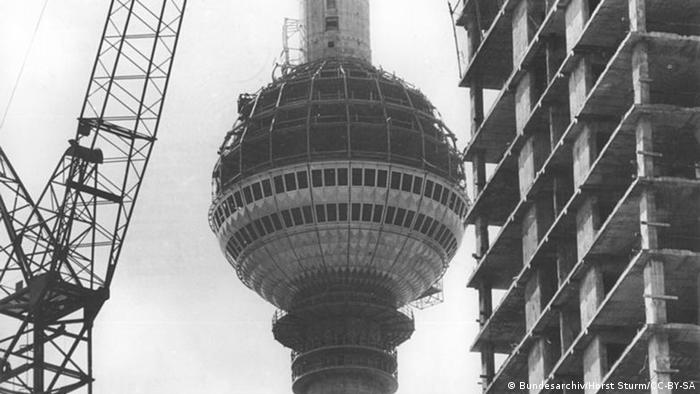 Originally, the tower was to be built in the Müggelbergen hills, in the southeastern part of Berlin. But that would have restricted air traffic to Schönefeld Airport. In 1962, the East German government rejected a second possible location, the Volkspark Friedrichshain, as the planned costs of 30 million ostmarks were deemed impossibly high during that period of economic crisis. With some delay, construction began in May 1965 at Alexanderplatz - and then stopped again because of the non-transparent budget of the building. Finally, the foundation stone of the tower was laid on August 4, 1965. With its 368 meters (1,207 feet) it is still the tallest structure in Germany today. 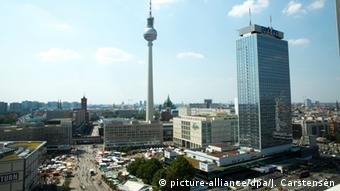 The TV Tower at Alexanderplatz in 2015

When the East German government planned the TV tower in Berlin in the 1950s, it not only aimed to create a shining symbol of the superiority of socialism, but also wanted to reinforce its medial presence. The frequencies made available to the recently created East German state were limited by international bodies. The high tower would provide reliable radio and television reception to its population. While West German TV offered attractive programs, state control of the new medium was essential to win the hearts and the minds of the East Berliners.

The Fernsehturm opened to visitors in 1969. High-speed elevators would take them to the Panorama floor at 203 meters (666 feet) above the ground. The restaurant located on the floor right above rotates once every hour and offers the best view of Berlin, including a good perspective on the western part of the then still divided city. It took four years to build the prestigious building, and the construction costs were three times higher than initially planned - a fact which only emerged after the fall of the Wall. Today, the Berlin TV tower is one of the city's most famous landmarks, attracting visitors from all over the world.