Hundreds of thousands of Berliners and visitors are celebrating the fall of the wall 25 years ago this weekend. But while some are enjoying the festive atmosphere, Mikhail Gorbachev warns of a new Cold War. 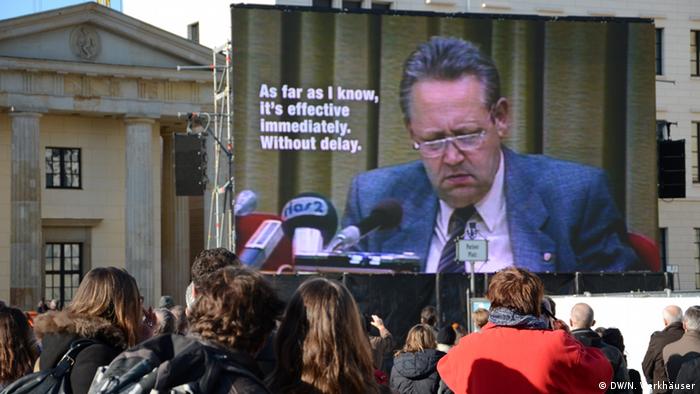 It's easy to identify the most photographed scene in the capital: the installation of 7,000 illuminated balloons which mark the former path of the Berlin Wall, a feast for the eyes that Berliners and visitors all enjoy.

"A magnificent idea," says Brigitta Wolf, who has traveled here with her family from southern Germany to take part in the festivities. The 78-year-old lived through the construction of the wall in 1961 and can remember exactly how it was 25 years ago when the wall fell. "I wept. Then we popped open a bottle of champagne and celebrated."

Joy and pain - like many other older people, Wolf thinks about the Berlin Wall in connection with her own life. Her family was torn apart by the division of Germany. Today, the Karlsruhe resident hardly recognizes Berlin. "That feeling of trepidation that was so present in divided Berlin is gone now," elaborates her son Michael.

Coming for the party

The "wall of light" installation will run through the city until Sunday evening, from the Brandenburg Gate to the former border crossing at Bornholmer Strasse, where the first barrier fell on the night of November 9, 1989.

A short while before, SED (Social Unity Party) and Politburo member Günter Schabowski had announced at a press conference that GDR citizens would be allowed to travel abroad, "unconditionally." The permits were to be issued shortly. It was the beginning of the end for the Berlin Wall and communist East Germany. 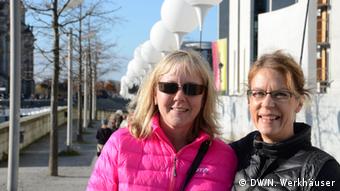 Tourists Jenny and Ulrika came to Berlin just for the celebrations

This famous scene from Schabowski's press conference is being replayed repeatedly in front of the Brandenburg Gate on a large screen, subtitled in English so that foreign visitors, like Jenny and Ulrika from Sweden, can understand it. True fans of Berlin, they were also in the city for the 20th anniversary celebrations. Just like five years ago, they made sure to book their hotel early so that they could "celebrate together with the Berliners."

Ulrika first realized as a teenager that people were shot dead at the Berlin Wall, and she sees the end of this terror as a reason to rejoice now. "As the wall fell, there was a picture in a Swedish newspaper of an East and West German in each others' arms," she explains, "I can still see that picture in my mind today."

While hundreds of people were frolicking under the bright blue sky this morning on Berlin's Pariser Platz, in front of the Brandenburg Gate, in a neighboring building former Soviet leader Mikhail Gorbachev was giving a speech that was anything but celebratory. Since the end of the Cold War, the level of trust between Russia and Western Europe has grown significantly. But this trust has "collapsed" in the past few months, said the Nobel Peace Prize winner.

"The world stands on the threshold of a new Cold War. Some say it has already begun," Gorbachev stressed. It was his policy of perestroika that enabled German unity. The 83-year-old accused the West, particularly the US, of having taken advantage of Russia's weakness at the end of the Cold War and being "short-sighted" in the pursuit of its own goals.

As examples, he cited not only NATO's eastward expansion, but also the conflicts in Libya, Syria and Iraq. "Here in Berlin, on the anniversary of the fall of the Berlin Wall, I must say that all this has had a negative impact on relations between Russia and Germany, which had been exemplary."

The experiences of the 1980s show that there is always a way out, said Gorbachev, clearly referencing the bloodshed in Ukraine. Neither "recrimination" nor sanctions will solve the problem. Both sides should quickly look for new ways of understanding one another, he said.

The whole city as celebration

The official part of the celebrations starts on Sunday morning at the memorial on Bernauer Strasse. Chancellor Angela Merkel will commemorate those who lost their lives at the Berlin Wall. At least 138 people were killed, most of them shot by East German border guards while trying to escape, and there is a new exhibition dedicated to these victims at the memorial. 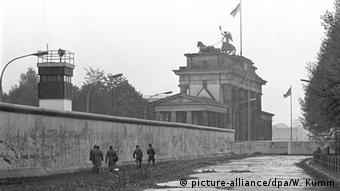 At this site you will find the last remaining piece of the Berlin Wall, which has been preserved along with some of the extensive border fortifications. The great interest in the history of the Berlin Wall and those whose fates were bound by it is shown by the regular crowds of visitors. More than 5 million tourists and Berliners have visited the memorial thus far. Merkel is set to open the new permanent exhibition with a speech and a tour.

Before that, the chancellor, along with governing mayor of Berlin, Klaus Wowereit, will attend a service at the Chapel of Reconciliation, located in the middle of the former "death strip." After a ceremony in the Konzerthaus Berlin and a street festival with live music at the Brandenburg Gate, the festivities will come to an end in the evening, when 7,000 balloon guardians release their balloons into the sky, symbolically sending the "wall of light" into the Berlin night sky.

Berlin commemorates 25th anniversary of the fall of the Wall

People from across Germany and the globe are flocking to Berlin to remember the fall of the Wall 25 years ago. Iconic figures, among them former Soviet leader Gorbachev, are also in the capital for the historic occasion. (08.11.2014)

The overture to the Fall of the Wall

In 1989, after 28 years of divinding Germany, all of a sudden the Berlin Wall came down. But it's a little known fact that before reunification, East and West held detailed preliminary talks about open borders. (08.11.2014)

Germany has kicked off a weekend of celebrations to mark the 25th anniversary of the fall of the Berlin Wall. Among those in Berlin for the festivities is former Soviet leader Mikhail Gorbachev. (07.11.2014)