Berlin leftists prepare to party as police leave Rigaer | Germany | News and in-depth reporting from Berlin and beyond | DW | 14.07.2016

The autonomous leftist scene in Berlin is celebrating a victory after a court ruled that the eviction of a housing project was illegal. But interior ministers reiterated their tough stance on left-wing extremism. 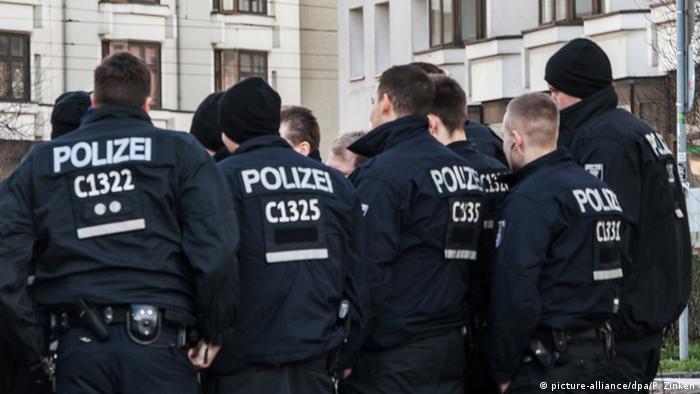 Following a weekend of fighting, fireworks and tear gas, the row between the Berlin government and the leftist collective living at Rigaer Strasse 94 has taken yet another turn.

On Wednesday, a Berlin court decided that the building's anarchists had the law on their side and that the partial eviction of the ground floor on June 22 had been illegal. The property owner, who wants to renovate the building, had failed to provide an eviction notice and not sent a representative to the hearing, leaving the court with no option but to recognize the legal rights of the leftist club.

About 2,000 people protested on Saturday, allegedly leaving 123 police officers injured, and there has been a spate of property damage in the past year, particularly the burning of cars, as developers have tried to take over the commune.

But there was celebration at the building on Thursday, when a bailiff arrived to enforce the ruling. The residents were allowed to change their locks, and police carried away the barricades that had been set up around the house. "The doors are open!" Lukas Theune, the lawyer representing the commune, announced to the crowd. 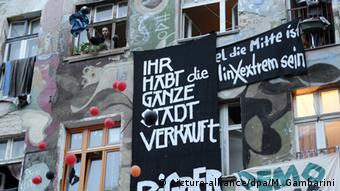 The building is owned by a British shell company

By early Thursday evening, police had pulled out of the entire street and the construction company was removing the tools and materials it had been using to renovate the building's bar following the illegal eviction.

Meanwhile, two masked leftists read a statement for reporters and onlookers through a megaphone: "If [Berlin Interior Minister Frank] Henkel calls Rigaer Strasse a law-free space, then we'll take the compliment gladly. ... He is the one who regularly sends his troops here and brings violence and repression to the area - not us."

Some opposition politicians said the ruling meant that the 300 police officers who had protected the workers during the eviction had effectively abetted a break-in. But the police themselves were quick to underline that "the court did not find that the actions of the police were unlawful" in a statement released on Wednesday.

Henkel, Berlin's conservative interior minister, issued a defiant statement in the face of the verdict and the suggestions that police had acted illegally in helping to clear the property. "The operation was based on laws about preventing danger and served the protection of the construction workers," he said. "We agree with this legal interpretation."

Federal Interior Minister Thomas de Maiziere backed up Henkel's take and repeated his fellow Christian Democrat's line that there would be no negotiation with the leftists in the building.

"The use of violence against police officers and neighbors, setting cars on fire, and the provocation of hate and violence will not be accepted," de Maiziere told the "Berliner Zeitung." "It is right to counter that with toughness. There is nothing to negotiate with people who commit violence." De Maiziere also said the verdict had not changed anything: "The police are fulfilling their duty in all our names. It deserves support for that, not hate and violence." There were 86 - mostly brief - arrests on Saturday night

Even Chancellor Angela Merkel was persuaded to express an opinion in one of her pre-summer holiday interviews, though she took a more conciliatory tone, telling TV station Sat 1 that the solution to the conflict lay in a "mixture of toughness and talks."

No one knows exactly who the owners of the property are. The property was bought in 2014 by Lafone Investments Limited, a British shell company whose sole shareholder is John Dewhurst, a London-based lawyer who told the "Berliner Zeitung" that he was not the real owner - he only represented an anonymous owner.

The Berlin attorney Andre Tessmer, who represented Lafone Investments, said he did not attend Wednesday's court hearing because he felt in danger. "A neighbor's parked car in front of my building was set on fire, but I assume it was meant for me," he told news agency AFP. "I feel personally threatened." He has since given up the assignment, and the owners said on Thursday that they will appeal the decision with a new lawyer.

Though the commune began life in 1990 as a politically active squat, the residents negotiated rental contracts in 1992 and there are agreements covering most of the building.

Nevertheless, a whole section of the 2015 report by the German domestic intelligence agency, the Verfassungsschutz, is devoted to Rigaer 94, calling the back building of the property a home to a "hard core of the autonomous 'Anarcho scene.'": "It is a starting point and haven for militant action to fight for 'autonomous free spaces.' In their self-portrayals, the protagonists call for anarchism as well as hate towards 'cops, the state, and repression.'"

In the wake of two spates of property damage by extremists in Berlin, some news outlets and politicians have warned of a rise in "leftist violence." But the long-term stats do not bear this out. (09.02.2016)