Berlin's arts scene is one of the most diverse and exciting in the world. Will the new "Based in Berlin" exhibition this summer provide a sustainable model for displaying young talent? 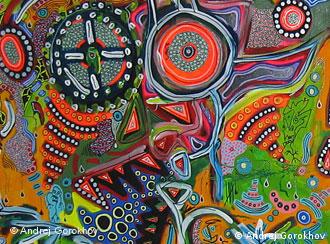 Berlin flourishes with new art - but how should it be viewed?

From chic gallery spaces in the Mitte district to off-spaces in Neukölln, Berlin's contemporary arts scene sprawls across the city in a seemingly endless canvas. As the city continues to develop rapidly, attracting more and more artists from different corners of the world, the question of how to create visibility for their output remains unresolved.

In this debate, politics and art have been at odds. Berlin Mayor Klaus Wowereit's planned competitive exhibition, now officially called "Based in Berlin," has set off widespread skepticism, if not defiance, in the local community.

In January, 230 artists, curators and critics wrote an open letter entitled "To have and to need," announcing a boycott of the open call for artwork, which they felt was restrictive, and challenging the city for pursuing its own agenda while existing contemporary arts institutions remain underfinanced.

Their pleas did not go unnoticed. The exhibition, which is scheduled to take place from June 8 to July 24, ultimately bowed to criticism by raising its age limit and will incorporate existing institutions such as the Berlinische Galerie and the Hamburger Bahnhof, in addition to its designated location in an atelier house in the Mitte district. On display will be works by 80 Berlin-based artists, from performative art and public sculptures to photography, film and video. 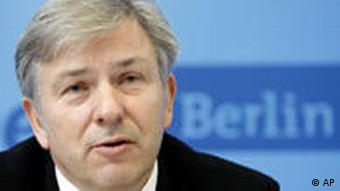 In addition, and perhaps most importantly, the exhibition is to serve as a kind of litmus test for the potential of a permanent art hall for the city, another point which drafters of the letter had openly called into question.

A home for new artworks

Hans-Ulrich Obrist, co-director at the Serpentine Gallery in London and one of three advisors to a team of young curators overseeing the exhibition, believes that the debate surrounding the project is a positive force. Contrary to some artists' protests, he says Based in Berlin will create an important opportunity for both local and foreign viewers to gain an overview of the city's next generation, which in recent years has only been presented in fragmented ways.

"My experience through the Berlin Biennale and other projects shows how useful it can be to do a kind of mapping of what is happening among young artists," he told Deutsche Welle. "All political tensions aside, the project should draw attention toward the artists in pragmatic ways."

As to the need for a permanent art hall, Obrist says Based in Berlin could create a starting point for such an institution, but that it will take time to establish itself.

"Although many of Berlin's institutions and galleries are fantastic, the exhibition will help determine what kind of long-term venue the city needs to display emerging artists," he said. 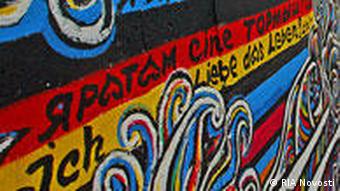 Some of the city's art, like the East Side Gallery, doesn't fit in any museum

Yet according to Moritz van Dülmen, an executive from Wowereit's team, finding a solution won't be easy. While for several years artists had advocated a new permanent art hall, many now claim that the city should rather invest in its existing institutions and ateliers.

"The most important thing is that we address the issues constructively and determine what the city should invest in," he said. "This requires viable alternative suggestions, and those haven't really been given."

And although the organizers of Based in Berlin intended to address issues of how to provide ongoing support and exposure for artists, the administration hadn't expected debate to surface before the exhibition's unveiling this summer. "We wanted to explore with the artists what Berlin's art scene needs ," van Dülmen emphasized. "The discussion just came a bit early."

That said, some claim that Berlin's art market and public support system for artists pale in comparison to other cultural centers, due to a lack of coordination between the city government and the artists themselves.

Hergen Wöbken, managing director of the Institute for Strategy Development in Berlin, believes that respect for the existing infrastructure is fundamental to a development plan that will provide artists with more exposure on the international scene and strengthen the infrastructure long-term. He also says that such measures would benefit the city economically.

"In terms of urban development, the city should have a vested interest in lasting political strategies for contemporary art, which is one of its greatest resources," he said. "Berlin is in need of intelligent cultural-political strategies that have the power to create an international audience." 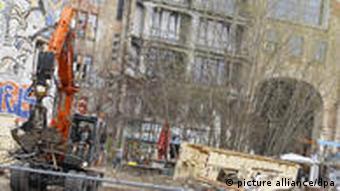 The Tacheles squat is a symbol of Berlin's art scene

Despite its rocky start, Based in Berlin may still have that potential. Obrist remains optimistic that the project will create a broad view of young artists in the city, which will cater to both a local audience and visitors passing through Europe for well-established events such as the Venice Biennnale or Art Basel.

He emphasized that it is not a commercial venture, but a public art exhibition that will give artists a chance of exposure and awaken curiosity.

"It is important to create a critical mass for what is going on in Berlin, such as during [events like] Gallery Weekend or the Berlin Biennale," he said. "Based in Berlin is not about homogenizing an 'archipelago' situation. The archipelago won't disappear," he added, referring to the fragmented nature of the city's art scene.

For the art market to improve, artists and administrators need a clear vision of how to bring Berlin's dispersed art community forward structurally. Private funding, which is more widespread in cities such as London and New York, would be the next step. But, as Obrist points out, the city's backing is an important starting point.

"It is a good sign that the mayor set out to implement [Based in Berlin]," he said. "It is a sign for the future. And hopefully the project will be sustainable."

Berlin's University of the Arts hopes to see Ai Weiwei among the ranks of its professors soon. The university's president stresses that its teaching offer was in the works long before Ai Weiwei was arrested in China. (21.04.2011)

Tacheles is a fixture in every guidebook of Berlin, but the iconic art house which became a symbol of Berlin's creativity after the Berlin Wall fell in 1989, is now in danger of being shut down. (18.04.2011)

The art market is gradually recovering from the financial crisis. Fairs and auctions are taking in more money again. (14.04.2011)

The VIP Art Fair, an online gallery, is raising a lot of interest - and questions. Is zooming in on a digital image of a painting enough for collectors to decide to spend millions of euros? (29.01.2011)

More on the Based in Berlin project