With over 100 Christmas markets in Berlin, our columnist Gero Schließ took it upon himself to visit some - and discovered something new in the process. 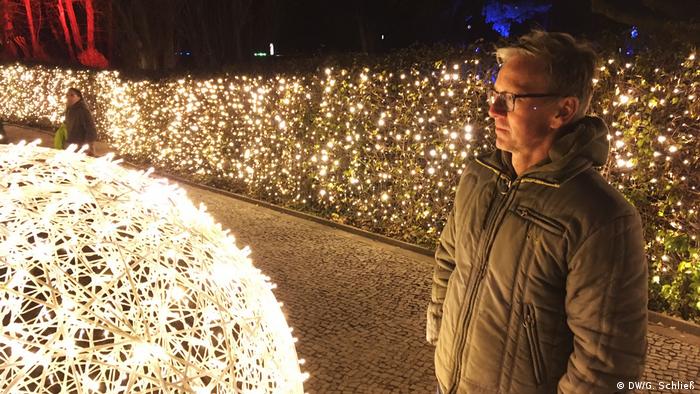 "Oh, merry Christmas market!" That could become the unofficial Berlin Christmas hymn. After all, with over 100 markets in the capital city, there are more in Berlin than in any other German city, according to the newspaper "Berliner Zeitung."

For me as a Christmas market grump, that's not exactly "merry" news. It feels more like Berlin's most beautiful public squares and boulevards are being taken over by commercialized Christmas craziness. There doesn't seem to be any escaping the "Christmasing," with no Christmas-free zones to be found anywhere. Beyond the tourist's magnet at Gendarmenmarkt, which draws more than 800,000 visitors each year, now many neighborhoods are offering their own Christmas markets. And each market wants to be a little bit different. For instance, a "fair trade" Christmas is celebrated at Kollwitzplatz in Prenzlauer Berg. There, you can put on the pounds courtesy of fairly traded, politically correct sausages. In contrast, Neukölln offers the highest Christmas market in Berlin; it's located atop the windy roof deck of a parking garage. It's a good place for the consumption of mulled wine. And the various groups of Berlin-based Danes, British and Swedish people have their own markets at the ready. For those who have become allergic to the smell of mulled wine and roasted almonds, there's always the cool club atmosphere of "Holy Shit Shopping" at Ostbahnhof. I can't even get heated up to that sort of coolness.

To our visitor from Cologne, the sheer number of 100 markets to choose from is impressive. In Cologne, his city can boast only 50, the Christmas market aficionado laments.

And so something happens that shouldn't: one evening, we make our way to Berlin's Christmas attraction, the "Christmas Garden." After a seemingly endless drive through the dark streets of Berlin we finally arrive. "It's all so fake," I think to myself. During the day these are the Botanical Gardens. It's only at night that a colorfully lit winter wonderland appears. On their flyer, the event's coordinators grab your attention with images of 2-D reindeer, larger-than-life light cones, a four-meter tall star and over one million lights. 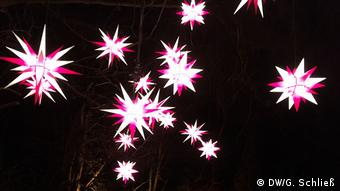 Surrounded by dancing stars, colorful balls of light and boxwoods strung with lights, we make our way along the "Path of Contemplation," as the flyer describes it with pastoral pathos.

But at first, I don't feel that way at alI. It's icy cold and windy. Even the culinary booths and drink stands don't offer any warmth. This has nothing to do with Christmas, I complain, as two women make their way toward me. "No, just wait, there are nice things back that way," they tell me and point in the direction from which they've just come.

That's when it happens. At first, it's very quiet - nearly muffled by the sound of our footsteps. But as we round a corner, I hear it ever more clearly: "Rudolph, the red-nosed reindeer," sung with a sonorous voice and thick American accent. And then we see them: the reindeer in all their 2-D glory. Suddenly, my hands and feet are no longer freezing cold. I grow warm instead. 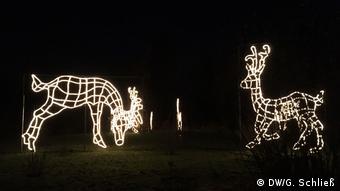 It is the day after Thanksgiving, I instantly recall. And with the sounds of "Rudolph, the red-nosed reindeer" ringing in my ears, I am taken back to my first Thanksgiving in the US. Thanksgiving there is a family festivity, just as Christmas is for us in Germany. For my first Thanksgiving feast, a friend of mine in Washington took me with him to his family's farm in Arkansas. On Thanksgiving morning, we went with his father and uncle out on the traditional deer hunt. That evening, his father included me in the family prayer. It was as if I had been taken in. I felt so much friendship and warmth.

"Gero, where are you?," my friend calls to me, drawing me out of my reveries. I hesitate for a moment and then move on. Back to the cold of the night. I feel somehow bound with the universe. There really is something here that has to do with Christmas; I am stunned. I feel a bit taken by surprise and search for an explanation. Perhaps it is just that each person needs to find the right Christmas market for himself in order to experience his own Christmas story.

With its plethora of Christmas markets, Berlin is the perfect place to do that. Or was that just me losing my senses in the icy cold, victim to a pre-Christmas mirage?

Some 100,000 people are expected on the second weekend of Advent at Dresden's Christmas market, known as the Striezelmarkt. A huge stollen about four meters long will be paraded through the historical old town. (02.12.2016)

There are more than 50 Christmas markets in the German capital, scattered across the city. We'll show you our favorites - places in Berlin that glisten and glow with festive spirit. (02.12.2016)