Belgium′s coronavirus (over)counting controversy | News and current affairs from Germany and around the world | DW | 02.06.2020

Belgium has been blasted for its seemingly sky-high death toll from COVID-19. But as Teri Schultz explains, Belgian experts have argued it's undercounting that should be under scrutiny. 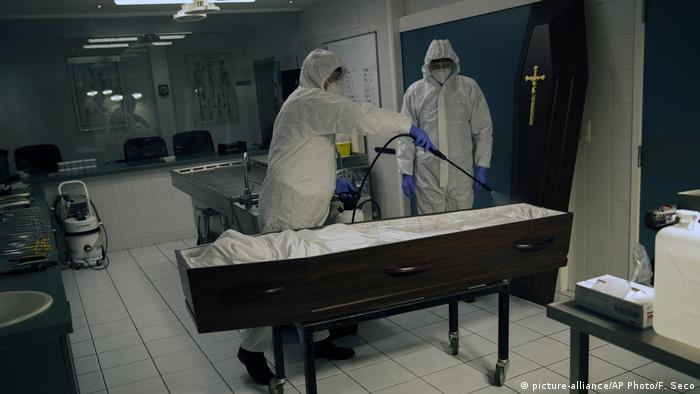 Belgian tourism officials have accused Professor Steven van Gucht, head of viral diseases at the national health institute, Sciensano, of ruining their industry. They railed that no one would ever come to visit again —even if they were allowed — with what looked like the highest COVID-19 death rate in the world.  Even Prime Minister Sophie Wilmes politely asked van Gucht and his fellow COVID-19 crisis team members, who conduct the public updates, whether they could stop counting the mortality rate differently from other nations.

"But we refused," van Gucht said with a chuckle, "We explained to the prime minister why we are doing a good thing and she accepted this. What we are doing is really good practice and we should not change."

Belgium is cited on most world graphs as having the highest death toll per capita in Europe and among the highest in the world. What van Gucht says is "good practice," for all the bashing he's received for it, is what he described in a recent interview with DW as radical transparency, counting even suspected cases of COVID-19 in the national death toll, regardless of whether the deceased person was tested. In the early days of the pandemic, when the virus was sweeping across nursing homes, sometimes only a tiny percentage of those who died had been given a test, yet 100% of the deaths were attributed to coronavirus. In the latest statistics from the government, more than 80% of care-home deaths were confirmed as coronavirus by testing.

There is no international standard for deciding who died of COVID-19 and who died of other causes, and that's led countries to count the deceased in varying ways — sometimes drastically increasing the number of dead after changing a national method of calculation.

Some other countries do not count deaths in nursing homes in their national tallies, only deaths in hospitals, while another variation is counting only those confirmed to have been infected.

"We assumed we would have some overcount" with the Belgian method, van Gucht said, adding that he was willing to accept that.

He explained that the best way to compare different countries is by assessing excess mortality, the number of people who have died per month, this year compared to last year. When examined like this, van Gucht said, Belgium's rate is on par with other countries hit hard by the virus.

But this method of tabulation also highlighted just how bad the country has suffered. A study by VUB University in Brussels showed that not since the country was in the throes of World War Two and occupied by Nazis have so many Belgians died in April: 15.7 deaths per 1,000 people in 2020, compared with 16.3 deaths per 1,000 in April 1941.

Van Gucht said he is unfazed by concerns that, once the crisis has subsided and all international numbers are confirmed, he may have overestimated the Belgian death toll. He said he has a bigger worry: That even now he may be undercounting and under-estimating the scope of the pandemic.