While the Netherlands reels from a spate of attacks against Muslims, Belgium's top court has dealt a temporary blow to one of Europe's most successful anti-immigrant parties, Vlaams Blok, by declaring it racist. 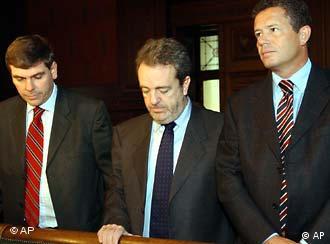 Belgium's supreme court on Tuesday voted to uphold a verdict by a lower court in April that found the far-right nationalist party guilty of "permanent incitement to segregation and racism." The justices rejected all 21 arguments put forward by the Vlaams Blok in an appeal case, arguing that freedom of speech had its limits under the country's tough anti-racism legislation.

The verdict effectively shuts down one of Belgium's most popular parties by cutting it off from some €250,000 ($325,000) in annual public funding. Anti-racist activists, who have lobbied to keep the party, which espouses anti-immigrant policies and advocates secession, out of the country's politics, applauded the court's decision.

But Vlaams Blok leader Frank Vanhecke likened the ruling to legislation applied by the former communist states in Eastern Europe. "What happened in Brussels today is unique in the western world: Never has a so-called democratic regime outlawed the country's largest political party," he said in a statement Tuesday.

Vlaams Blok has now vowed to regroup and return with an even stronger voter basis.

"We will establish a new party. This one Belgium will not be able to bury; it will bury Belgium," Vanhecke said.

The party's popularity is unlikely to be diminished by Tuesday's court decision. Two recent opinion polls ranked Vlaams Block the most popular party in the Flemish-speaking north, where it won 24 percent of votes in June's regional elections. In national elections in May last year, the party posted its best performance in its 26-year history by taking 18 seats in Belgium's national parliament. 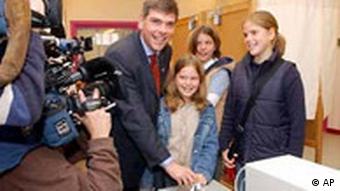 Filip Dewinter and family during parliamentary elections in May 2003, when Vlaams Block increased their seats to 18.

The party, which made a name for itself by campaigning for the richer, Dutch-speaking region of Flanders to secede from the southern French-speaking part of Belgium, said the Brussels' court verdict did not amount to much. It will continue to exist with the same ideals but would re-establish itself under a new name, either "Vlaams Blok+" or "Vlaams Belang" (the Flemish Interest), Vanhecke said.

Although the new version of the party will no longer advocate the forcible expulsion of non-European immigrants (as decreed by the court), it will continue to push for the departure of minorities "who reject, deny or fight against culture and European values like the separation of church and state, freedom of expression and equality between men and women," a statement said.

Observers and even party-insiders have said the court's ruling will have little effect on altering Vlaams Blok's anti-immigrant position. Party co-leader Filip Dewinter has promised to come back from the verdict with a fighting spirit.

"Some say this is just a matter of face-lifting. I don't think so," he told Deutsche Welle. "The Vlaams Blok is having a manicure. We will sharpen our teeth and nails and emerge from this stronger, more determined and better than ever."

"We are a modern party of the nationalist right. We are now the reference point in Europe," the charismatic Dewinter said in Monday's edition of Het Laatste Nieuws.

Vlaams Blok has been part of the resurgence of extreme right, anti-immigrant parties throughout Europe, from the Austrian Freedom Party of Jörg Haider to Jean-Marie Le Pen's National Front in France and the Dutch Lijst Pim Fortuyn, named after the murdered populist who established it.

The current wave of anti-Muslim attacks across the border in the Netherlands following the murder of the controversial film director Theo van Gogh has also added fuel to Vlaams Blok's campaign to keep non-European immigrants out of Belgium if they do not adopt the country's rules and western values. And it is expected that the party will increase its popularity when it relaunches this coming weekend.

Following the assassination of a famous Dutch filmmaker by a suspected Muslim radical last week, tensions between the country and its Muslim community have reached the boiling point.(Nov. 8, 2003)

After parliamentary elections, Belgian Prime Minister Verhofstadt begins forming a new center-left government after the Liberals and Socialists registered a thumping win in polls that also produced huge gains for a far-right party. (May 19, 2003)