Being honored by the Fatherland: Germany′s Federal Cross of Merit | Germany| News and in-depth reporting from Berlin and beyond | DW | 07.08.2010

Being honored by the Fatherland: Germany's Federal Cross of Merit

Where the UK has its knighthood, and France its Legion of Honour, Germany rewards its loyal citizens with the Federal Cross of Merit. Its most famous recent recipient was the national soccer team coach Joachim Loew. 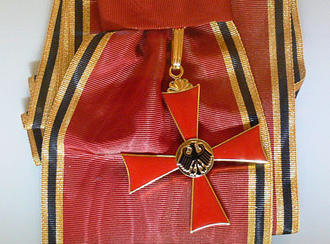 The Federal Cross of Merit was introduced in 1951

After the deflating end to Germany's thrilling World Cup campaign in South Africa, President Christian Wulff did his best to lift the mood by nominating coach Joachim Loew and his team for some national honors.

The honor that Loew is to receive is the most commonly awarded - the Cross of Merit on ribbon, or the Knight's Cross. Eight other national football coaches have received the same honor, as has the women's soccer team coach Silvia Neid. The footballers themselves, meanwhile, are to be honored with the Silver Laurel Leaf, the highest sporting honor in Germany. 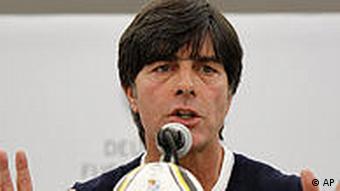 Loew is by some distance the most famous person on this year's list of winners. Unlike in Britain, celebrities rarely make the cut, and if they do, it is never for things like "services to entertainment." Susanne Bos-Eisolt, who is in charge of the department of the president's office that administrates the honors, explains what they are for.

"First, to say thank you for what people do voluntarily for the state and for society. And often it is about making the invisible visible," she told Deutsche Welle. "People often work on a small scale in local communities over many years, so that the wider public never gets to hear about them. But as soon as the president says "thank you," either personally or through such an award, the invisible becomes visible."

Anyone can nominate anyone

There is a democratic principle behind Germany's state honors. Literally anyone can nominate anyone for any award. All it takes is a letter either to the presidential office - or your local state premier - detailing the name, address and the accomplishments of the nominee. German citizenship is not a requirement, either for the nominee or the nominator, and some seven percent of the approximately 2,300 awards handed out every year go to foreigners.

There are eight different Federal Orders of Merit and they are organised more or less by demographic range - the more lives you have affected, the bigger the honor. The simplest honor - the Medal of Merit - is often awarded to people who have selflessly looked after their families, while the highest honor - "the Grand Cross" - is reserved exclusively for heads of state. There is also a Special Class of the Grand Cross, which has only been awarded twice – once to Germany's first post-war chancellor Konrad Adenauer, and once to Chancellor Helmut Kohl.

The awards in between mainly go to politicians, professors, Nobel Prize winners, assorted philanthropists and museum directors. Sometimes, in a given year, they are grouped into themes. Last year, the 20th anniversary of the fall of the Berlin wall was marked by awards relating to the former East Germany.

This left one of the recipients, Hubertus Knabe, director of the Stasi prison memorial site in Berlin with a dilemma. "Yes, I hesitated to accept this Cross of Merit because these kinds of state awards were misused in the past in Germany," he told Deutsche Welle. "We had two dictatorships, and every dictatorship used state awards to honor all kinds of collaboration." 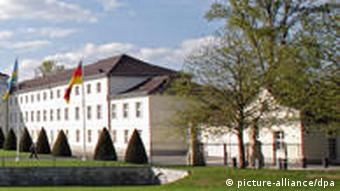 Knabe, an historian who has extensively studied the darker side of the German Democratic Republic, is used to associating state honors with corruption and toeing the party line. "If you read all these personal files, how they got all these orders and awards, it makes you a little bit allergic against these kind of state awards," he said.

Uwe Brueckner does not suffer from any such allergy. The Berlin policeman has been collecting German medals of honor since the age of 15 in 1975. To the occasional amusement of other collectors, Brueckner has specialized in the Federal Order of Merit in all its forms.

"I wanted to collect something where I had a chance of getting the complete set," says Brueckner, recalling his years of teenage rebellion. "Most collectors are more interested in earlier periods, especially the Third Reich, but there are so many different medals, and so many of them are impossible to find."

He has now completed the Federal Republic set - with 200 individual medals - though for the higher levels he has had to make do with examples that do not have the original certificate with them, and so have probably been bought direct from the manufacturer.

He keeps the cream of his collection in a beautifully-lit display case in the hallway of his small flat in north Berlin. The most privileged shelf - at eye-level - is dedicated to the Federal Order of Merit, and Brueckner has set the honors out in an immaculate arrangement. His prize possession is a "Great Cross of Merit with Star and shoulder ribbon" awarded to Karl Branner, the mayor of the western German town of Kassel, in 1990.

"It's better than collecting coins," Brueckner said. "Coins all look the same, and stamps are no fun because you can't even touch them without devaluing them. But medals often have real craftsmanship in them. Also, there's a story and some history behind every one."

While the modern Federal Cross of Merit has little in the way of craftsmanship – "nowadays they are just factory products that aren't embellished at all" – Brueckner is still proud of his set, partly for loyalty reasons.

"Would I describe myself as a patriot?" he asks himself. "Yes, I suppose so. I suppose there's some patriotism involved. I support Germany anyway."

Germany has secured the services of its national soccer team coach, Joachim Loew until the European Championships in 2012. Loew had put off renewing his contract until after the World Cup in South Africa. (20.07.2010)

Christian Wulff has taken the oath of office in a ceremony held in the Bundestag in Berlin. This makes him the 10th president in the history of the Federal Republic of Germany. (02.07.2010)