Listen to a live recording of Beethoven's Sixth Symphony, the "Pastoral," performed by Istanbul's National Conservatory orchestra at the 2002 Beethoven Festival in Bonn. 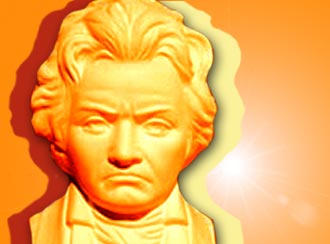 Opus 68, dubbed the "Pastoral," was a celebration of nature. Even the subtitles the composer gave to each of the five movements suggest the programmatic intentions behind the piece. However, the work evokes feelings more than it paints in sound.

Under the direction of Ramiz Mailk-Aslanov, the Istanbul's National Conservatory orchestra performed Beethoven's picturesque Sixth Symphony at the 2002 Beethoven Festival in Bonn.

Deutsche Welle sponsored the orchestra's one-week residency in Germany where the young musicians had the opportunity to rehearse with famed conductors like Krzysztof Penderecki, Helmuth Rilling and Peter Gülke.

The National Conservatory orchestra was invited on the occasion of the fortieth anniversary of the establishment of the Turkish language service of DW-RADIO.

Recorded in the Beethovenhalle Bonn

Listen to a live recording from the world premiere during the awards concert on October 8, 2001.

Listen to a live recording of the European anthem by the Ukrainian National Music Academy's symphony orchestra. The concert took place in the Beethovenhalle Bonn on October 8, 2001 under the direction of Roman Kofman.