Listen to Beethoven's Fifth, perhaps the best known orchestral work in the western world, performed by the South African National Youth Orchestra at the 2006 Beethoven Festival in Bonn. 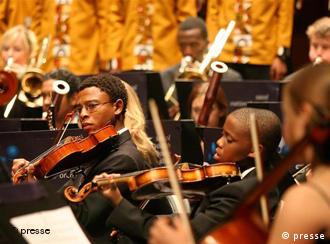 Beethoven himself conducted the premiere of his Fifth Symphony, performed together with the Sixth Symphony ("Pastorale"), in Vienna on Dec. 22, 1808 -- which didn't arouse much interest. Since then, however, it has become one of classical music's most popular works.

Guided by its powerful opening motif, the C Minor Symphony conveys one of the fundamental elements of European culture by steering the listener "from night to light," from defeat to triumph.

The troop of 14- to 20-year-old musicians from South Africa performed Beethoven's legendary "Fate Symphony" at the Beethoven Festival and Deutsche Welle's Orchestra Campus with utmost professionalism -- and at a fierce tempo. The orchestra and its conductor, Conrad von Alphen, were met with enthusiastic applause from the predominantly youthful audience.

Listen to a live recording from the Beethoven Festival concert on Sept. 9, 2006 at the Beethovenhalle in Bonn.

Zulu songs, Beethoven's Fifth and a world premiere all in one concert? Deutsche Welle and the Beethoven Festival have invited South Africa's best young musicians to Germany. Their concert Saturday will be broadcast live. (Sept. 9, 2006)

Listen to a live recording of Beethoven's Sixth Symphony, the "Pastoral," performed by Istanbul's National Conservatory orchestra at the 2002 Beethoven Festival in Bonn. (Sept. 4, 2006)

Click on the links for more information on the 2006 Beethoven Festival and to download some of the composer's greatest works for free.