Bayern Munich are hoping the Leverkusen boss can restore their winning form after a season that brought no titles. Bayern and current coach Louis can Gaal have mutally agreed to part ways after this season. 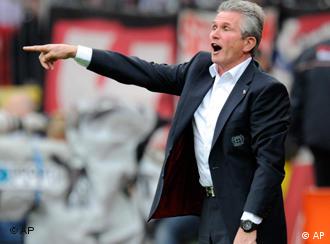 Heynckes will be at Bayern until at least 2013

Bayern Munich have announced that Jupp Heynckes will be in charge of the German football giants from next season. The Bavarian soccer club and former German international agreed to a two-year contract on Thursday that will keep Heynckes in Munich until 2013.

"Jupp Heynckes was our top candidate; we are delighted that we could reach an agreement. I am convinced that we will have a successful co-operation with Jupp Heynckes," said Bayern chairman Karl-Heinz Rummenigge.

Heynckes - who is currently under contract at Leverkusen - will take over from out-of-favor Bayern boss Louis van Gaal, who is leaving at the end of a disappointing season.

Heynckes is no stranger to Bayern, having coached the team to two league titles between 1987 and 1991. His most successful campaign as a coach came in 1998, when he led Real Madrid to a Champions League title.

"I have been Bayern coach twice and have always liked the atmosphere there. Of course you have to be successful as Bayern coach. But it is an attractive challenge I want to meet, together with the team," said Heynckes.

His first task at Bayern will be sorting out a roster that is still very much up in the air. Thomas Kraft, Hamit Altintop, Andreas Ottl, Miroslav Klose and Hans-Jörg Butt all have contracts that will expire soon, while speculation of early departure surrounds Breno, Anatoliy Tymoshchuk, Diego Contento, Daniel van Buyten and Danijel Pranjic.

Bayern Munich is also in desperate need of a revamped defense following an uncharacteristically poor season at the back. This includes ongoing rumors of acquiring Schalke 04's prized national goalkeeper Manuel Neuer and the need to fill a void at center and right back.

Heynkes will be with Leverkusen on April 17 when they visit Bayern in a Champions League qualification match. His contract in Munich officially starts on July 1.

In the space of little more than a week, the faces on the sidelines have changed dramatically. Multiple coaching shifts raise questions of fairness - and mean some of the principals are facing very unusual tasks. (21.03.2011)

The match-ups for the quarterfinals of the Champions League are set, with Germany's only remaining team Schalke facing defending champions Inter Milan. Chelsea will also host Manchester United in an all-English clash. (18.03.2011)

The governing body of European football UEFA has finally confirmed that the German Bundesliga will get four Champions League spots as of 2012. It was only a matter of time, say the experts. (28.02.2011)