Bayer compensates US farmers in GM rice complaint | Germany| News and in-depth reporting from Berlin and beyond | DW | 02.07.2011

A unit of German chemical giant Bayer AG has agreed to pay hundreds of millions of dollars to US farmers in a row over genetically modified rice. But despite the settlement, Bayer denies any negligence. 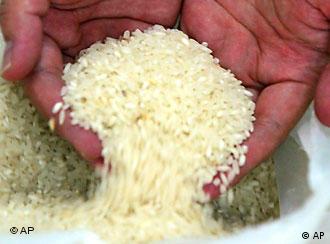 Bayer CropScience, a subgroup of the German chemical producer Bayer AG, has agreed to pay up to $750 million (517 million euros) to settle complaints submitted by US farmers.

Around 11,000 farmers in the states of Arkansas, Louisiana, Mississippi, Missouri and Texas filed lawsuits against the German company, claiming that their crops of long-grain rice had been tainted by genetically modified rice. The complaints stem from the period between 2006 and 2010.

In August, 2006, the US agriculture department announced that traces of Bayer CropScience's LibertyLink strain had been found in conventional long-grain rice. The complainants allege that Bayer waited at least a couple of months after learning of the problem before it informed the US authorities.

A complaint filed on behalf of the farmers claims that declining rice futures cost them $150 million within the first four days after the news was released. US rice exports to the European Union, Japan, Russia declined markedly.

"From the outset of this litigation, we made it clear to Bayer that the company needed to step up and take responsibility for damaging American rice farmers with its unapproved rice seeds," a lawyer for the farmers, Adam Levitt, said in a statement cited by Bloomberg News. "This excellent settlement goes a long way toward achieving that goal."

Despite agreeing to what one of its lawyers described as the biggest ever settlement regarding genetically modified foods, Bayer CropScience denied any negligence.

"Although Bayer CropScience believes it acted responsibly in the handling of its biotech rice, the company considers it important to resolve the litigation so that it can move forward focused on its fundamental mission of providing innovative solutions to modern agriculture," Bayer said in a statement posted on its website.

The EU's highest court may classify honey containing traces of genetically modified material as "food produced" from modified plants. Such a ruling may enable beekeepers with hives close to GM crops to seek damages. (15.02.2011)

Biotech companies have been experimenting with varieties of GM corn in Mexico ever since the lifting of a moratorium on the crops. Both proponents and detractors are claiming to represent the interests of poor farmers. (17.11.2010)

German chemicals giant Bayer has suspended its application for legal approval of one of it genetically-modified rice strands in Brazil as rice producers in the country worry about its impact on exports. (02.07.2010)