The Bavarian village Oberammergau is most famous for its religious dramas, but it also has another long-time artistic custom: wood-carving. The tradition, however, is facing extinction. 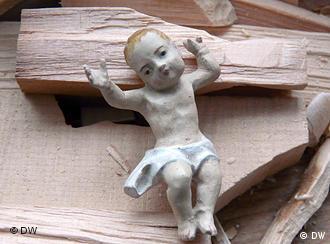 The Bavarian village of Oberammergau is associated first and foremost with its famous Easter Passion plan, which takes place only once every 10 years. The town has just 5,000 residents, but becomes a pilgrimage destination once a decade for Christians from around the world.

But Oberammergau is also well-known for its artistic wood-sculpturing tradition; it has an own trade school for artistic wood-work, which was established 150 years ago and is home to some 70 whittlers, who call themselves "Herrgottschnitzer" (God-carvers), since they mainly carve images of saints. 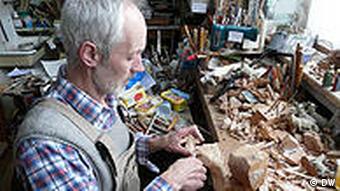 Normally, local wood-carvers in Oberammergau thrive on the rush of tourists during the Passion plays. But now that the carving industry has expanded, graven images are manufactured in large quantities and sold at much lower prices. As a result, traditional carvers like Herbert Haseidl struggle to make a living.

A wooden figure of Jesus manufactured in South Tyrol costs around 50 euros ($68). Haseidl, in contrast, has to charge 10 times as much for his handmade pieces to break even. He said that "traditionally handmade" is no longer a label that attracts customers; for many, cheap imports are just as good.

Most whittlers prefer to use Arolla pine wood, which grows in Bavaria. But with the loss of customers, craftspeople have to cut costs where they can, so cheaper pinewoods have become common, as well.

Haseidl said is proud of being part of Oberammergau's wood-craft tradition, but fears that it might soon be lost.

"Sometimes I feel like my profession is actually dying; especially with the economic situation we have right now," Haseidl said, adding that it's becoming increasingly difficult to recruit young artisans.

"My father, my grandfather and my two uncles were wood-carvers," said Haseidl. "It was everything I knew when I was a child; the first time I cut myself I was only four years old."

His hobby became his profession and, since 1966, wood-craft has been Haseidl's livelihood. Today, Herbert Haseidl works 60, sometimes 70 hours per week. Depending on how many orders he receives, he also works on weekends. 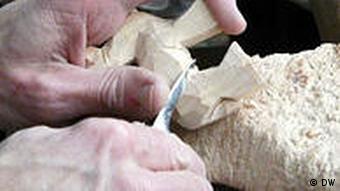 Every single handmade sculpture expresses Haseidl's love for what he does. Giving each one of them its individual character is most important to him.

"They all have their own story," he said. Sometimes he studies up on the lives of the saints before he sculpts them. "If you carve religious figures but don't stand behind the faith, they won't turn out."

In order to make every sculpture unique, Haseidl works with great care - and with up to 30 different carving knives.

"Every part of the body requires special treatment: the nose, eyes and hair especially. I even use different tools for curls and straight hair." In the end, every sculpture is covered with water-resistant lacquer.

Apart from religious images, Herbert Haseidl also offers secular motives, picture frames and toys. He recently completed a miniature version of the Brandenburg Gate - 200 times smaller than the original - for a Berlin customer.

"One has to be flexible these days - even a traditional wood-carver," he said.

A psychologist and a press spokesman will take up the role of Jesus in the next Oberammergau Passion play, the play's director announced. The event is held once every 10 years and will take place in 2010. (19.04.2009)

Germany's wooden toy makers preserve a tradition all year round

Many of Germany's traditional handcrafted wooded toys and decorations come from Seiffen. There, specially trained craftspeople work to preserve the centuries-old techniques and pass them on to the next generation. (16.06.2009)

For the first time in the history of the Oberammergau Passion Plays, a Muslim called Cengiz Görür takes a leading role. Almost all the local residents participate in the plays.

Where Christmas and arched candle holders are inseparable 13.12.2021