German umlaut vowels have long given non-native speakers lip cramps, but foreigners are not the only ones struggling with "ä," "ö" and "ü": The latter letter is currently at the center of a hot debate in Bavaria. 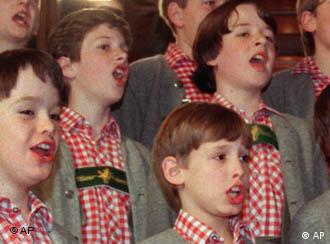 It all began with an essay about a favorite pastime among die-hard Bavarians: Bashing their northern German countrymen.

Tschüs, for example, a Northerner's way to say good-bye, is not a word any self-respecting Bavarian would use voluntarily.

But an inborn aversion against all things north of the so-called Weisswurstäquator, or white sausage equator, which roughly corresponds to the bed of the Danube river, isn't the only reason Bavarians don't like the word, as Valentin Erl, a retired teacher from eastern Bavaria, pointed out in his expose.

Puckering the lips only to canoodle

Bavarians simply don't like to say "ü," a sound that can be approximated by saying a German "i" (as in fit, hit) with a pouted mouth, Erl wrote.

"At most, a Bavarian puckers his mouth to drink or to canoodle, but never to pronounce an 'ü,'" according to Erl, who added that Bavarians preferred to say "i" instead.

The "i" vs. "ü" debate has provoked a flood of reader letters to Bavarian newspapers, with some people pointing out that Bavarians most certainly know how to say their umlaut.

Hans Triebel, who heads a club devoted to the promotion of Bavarian dialects, agreed that his countrymen have the ability to say an "ü."

"Kinna deama scho, grod meng deama ned," he told dpa newsagency in his best Bavarian, which can be translated as: "We can do it, but we just don't want to."

But the dialect lover also pointed out that the pure Bavarian makes do without the "ü." After all, Munich, which is München in conventional German, is called Minga among the natives.

Everyone seems to agree at least as far as an appropriate good-bye is concerned. Bavarians should simply forget about Tschüs and use Servus (Latin for servant) or Pfia Gott (May God protect you).

If it has to be a foreign word, Triebl encourages Bavarians to look further south instead: The Italian c iao would do nicely, he said, adding that Bavaria's always had more affinity with la dolce vita than Prussian prudery.

The owner of a shop selling traditional German clothing has put her talents in the service of man's best friend, designing Lederhosen and other typically Bavarian garb for canines. No word yet on what the dogs think. (June 17, 2004)

The Bavarian state government has agreed to give €400,000 ($494,000) to culture organizations who threatened to boycott the Oktoberfest if they didn't get the money to buy new lederhosen. (March 19, 2004)

Butchers in the city of Munich are locked in a bitter dispute with their counterparts in other parts of Bavaria over who should be given the patent for "Weisswurst," or "white sausage," a local speciality. (Jan. 20, 2004)