The highest court in the southern German state of Bavaria decided on Monday that the state did not overstep its authority by banning Muslim teachers from wearing headscarves in the classroom. 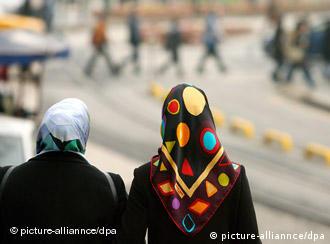 Headscarves are a sensitive topic in German society

Bavaria's Constitutional Court decided on Monday that the state law banning Muslim women from wearing headscarves when teaching was not unconstitutional.

"In the context of school supervision, the lawmaker can decide on rules regarding the extent to which teachers are banned from wearing external symbols and pieces of clothing that express a religious or ideological conviction while teaching," said Judge Karl Huber. 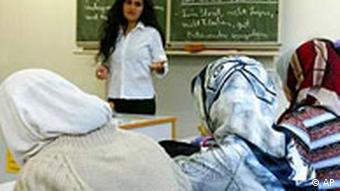 Unlike in France, German students are allowed to wear headscarves

An Islamic religious group, which brought the case to the court, claimed that the Bavarian headscarf ban -- which was adopted in November 2004 -- was unconstitutional because it did not treat all religions as equal, outlawing only the headscarf and not the Christian cross or any other religious symbols.

The state government, on the other hand, argued that the hijab -- a headscarf which is meant to shield Muslim women from the eyes of men outside their family -- was clashing with gender equality, which is guaranteed by the constitution.

This latest legal wrangle over headscarves highlights the inconsistency of Bavaria's state's school law. It says that no-one is allowed to wear religious symbols in the classroom -- except Christians and Jews. 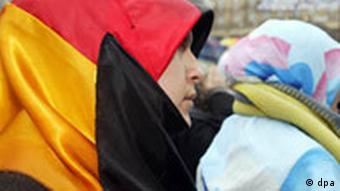 The debate is, among other things, about reconciling Islam with western values

The heated debate was first sparked in 2003 when Germany's federal Constitutional Court ruled that Muslims could wear their headscarves while teaching but at the same time encouraged new laws to ban religious symbols. Eight German states, including Berlin, have so far passed school laws that ban headscarves.

Unlike other headscarf-banning states, which saw the Muslim attire as an affront to Christian values, Berlin decided to treat all religious symbols on an equal basis.

"Berlin is the only city and German state which has not only banned the headscarf, but all religious symbols in schools -- that is the big difference," said Günther Piening, who is the Berlin commissioner for integration and migration.

"I think that's the only way to do it, because the general ban does not discriminate against one religion," he added. "It abides by the principle of equality as laid down in the German constitution."

Women's rights groups and conservative politicians, however, argue that many Moslem women have no choice but to wear a headscarf because their families demand it. Yet, according to a recent survey conducted by the Konrad Adenauer Foundation, 97 percent of those women asked said it was the duty of a Muslim woman to cover her head and that they should be allowed to wear them wherever and whenever they choose -- an opinion not shared by the vast majority of Germans.

Not a political statement 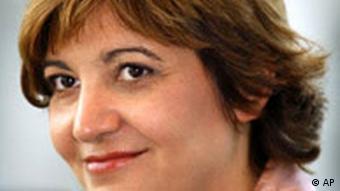 According to the deputy secretary general of the Konrad Adenauer Foundation, Christoph Kannengiesser, the wearing of a headscarf is not necessarily a political statement and it should not stop the communication between Muslims and Germans.

"We must not allow Muslim women to separate themselves from German society," Kannengiesser said. "We have to work harder to integrate them and the women also have to be willing to integrate. Muslims, however, are part of German society and we have to accept it if Muslim girls and women choose to wear the headscarf."

The headscarf debate remains a political hot potato. German Interior Minister Wolfgang Schäuble has repeatedly called on Moslems to accept different opinions on the role of women and the wearing of headscarves.

A few months ago, Ekin Deligöz, an ethnic Turk and member of the Green party in the German parliament, was placed under police protection after receiving death threats because she called on Moslem women to take off their headscarves. The affair triggered an outcry among the German population with many people wondering just how prepared Muslims really are to integrate and also accept criticism.

Politicians Rally Around Lawmaker in Headscarf Row in Germany

Politicians from across the spectrum have expressed solidarity with a Green Party parliamentarian of Turkish origin who has received death threats after urging Muslim women in Germany to take off their headscarves. (31.10.2006)