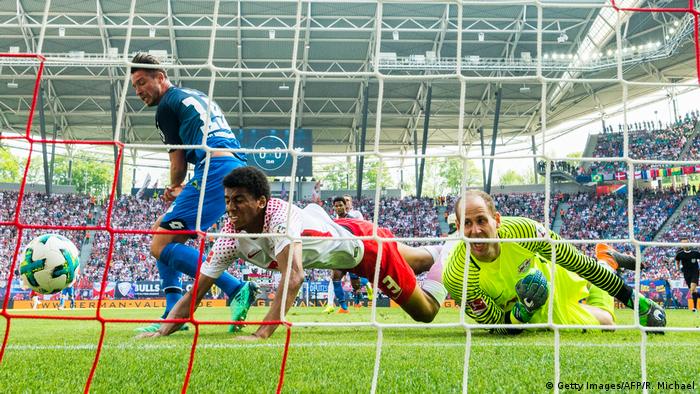 In the final stretch of the season, the margin for error grows smaller by the week. After this mis-match between the teams in fifth and sixth at the start of the weekend, RB Leipzig's only hope is that they've made all theirs at once, after a string of mistakes handed Hoffenheim a handsome and richly-deserved win.

Before Saturday's game, both coaches expected a high-tempo clash, with Ralph Hasenhüttl predicting a "feast of football" and Julian Nagelsmann promising his men would approach the game at "full speed."

The opening exchanges proved them both right. Hoffenheim pressed high with frontmen Serge Gnabry and Mark Uth both a nuisance and a threat. But Leipzig looked typically dangerous on the counter and should have opened the scoring in that fashion in the 13th minute.

Emil Forsberg showed strength and skill to snatch a loose ball and find Ademola Lookman. The English loanee picked out a smart pass to Diego Demme, who should have done more than shoot straight at Oliver Baumann in the Hoffenheim goal.

Worse was to come from another of Leipzig's senior defenders 20 minutes later as Hoffenheim's press caught skipper Willi Orban dwelling on the ball. Gnabry raced through to wrongfoot Gulasci with the confidence of a man in the form of his young career. That's seven in the last seven games for the man on loan from Bayern Munich.

Gnabry wasn't the only confident man in a blue shirt as the momentum gained from a late season run that now stands at 17 points from the last possible 21 surged through the side, and a third goal felt inevitable. It came in style just before the break, Gnabry clipping down the line to Uth, whose cross was turned in by wingback Pavel Kaderabek.

Hasenhüttl had seen enough, introducing Naby Keita and Jean-Kevin Augustin at the break. But any hope of a spectacular comeback looked lost when Emil Forsberg was shown a harsh red after attempting to shrug off a challenge but catching Florian Grillitsch with a flailing arm.

Then, a glimmer arrived as Keita showed brilliant skill before hitting the post and seeing the ball bounce off Baumann in to the net. In reality, that goal served only as a reminder of the hole he'll leave when he joins Liverpool in the summer. 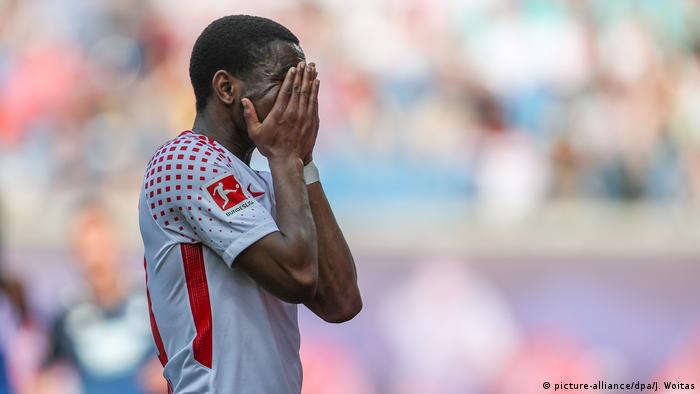 The home fans who allowed themselves a moment of belief in a season where inconcistency has been Leipzig's only constant were rapidly disappointed. Gulasci and Lukas Klostermann got caught under a floated cross and allowed Uth to double his tally for the day and his 17th of an excellent campaign.

Orban was hauled off soon after but his replacement Dayot Upamecano was caught out in a similar fashion for the fifth, with Lukas Rupp the benficiary this time. The French defender then added a late consolation after smart work from Lookman.

For all that Leipzig shot themselves in the foot, Hoffenheim oozed confidence throughout in a clinical display infused with pace, penetration and a plan.

Nagelsmann has spoken of how the Europa League disrupted his training sessions, the biggest weapon in the 30-year-old's arsenal, and the extra time spent drilling attacking shapes is clearly paying dividends. The decision to push Gnabry further forward than he played at Werder Bremen has reaped its own rewards and the 22-year-old's movement has allowed Uth to concentrate on honing his poaching instincts.

With Andrej Kramaric and Nadiem Amiri also packed in to the starting eleven, there looked to be a danger that Nagelsmann's selection was over-attacking against a side that finished last season as runners-up. But Hoffenheim are a hard-working and fluent side, capable of positional interchange without losing balance.

On the basis of this display, it's hard to see them failing to swat away Hannover and Stuttgart in the next two weeks, with both newly-promoted sides having little to play for. Then comes the last day and the visit of Borussia Dortmund. By that stage, Leipzig will be happy to have a shot at making the top four. Any more performances of this nature and even the Europa League will be a big ask.