The Hall of Famer faced racial prejudice yet persevered, going on to become one of the greatest to ever play the game. Aaron attained legendary status in 1974 by surpassing Babe Ruth's all-time home run record. 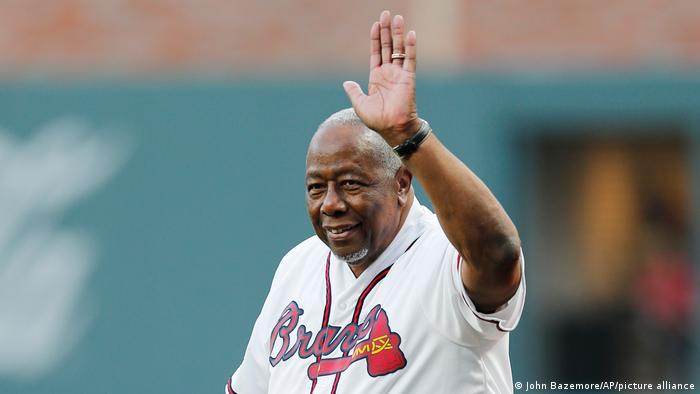 Major League Baseball Hall of Famer Henry "Hammerin' Hank" Aaron has died at the age of 86.

The Atlanta Braves announced his death on Friday, calling Aaron "a son of the Deep South who soared above its poverty and racism to become one of the most consequential figures in American history."

In announcing his death Friday, the Braves organization wrote: "We are absolutely devastated by the passing of our beloved Hank. He was a beacon for our organization first as a player, then with player development, and always with our community efforts. His incredible talent and resolve helped him achieve the highest accomplishments, yet he never lost his humble nature."

Over the course of his 21 seasons with the Milwaukee/Atlanta Braves and then 2 more with the Milwaukee Brewers, Aaron would win a dizzying number of hitting and fielding titles, setting records that remain untouched till this day. He was a 25 time All Star, named the league's Most Valuable Player and won two batting championships. He was inducted into the Major League Baseball Hall of Fame in 1982.

An outspoken advocate for civil rights, Aaron was also awarded the Presidential Medal of Freedom, the nation's highest civilian honor, in 2002.

Reacting to news of Aaron's passing, the Martin Luther King, Jr. Center tweeted: "You were more than an athlete. Your leadership transcended sports. And we are grateful for your courage and commitment to the freedom struggle."

Atlanta Mayor Keisha Lance Bottoms also expressed her gratitude tweeting: "While the world knew him as ‘Hammering Hank Aaron’ because of his incredible, record-setting baseball career, he was a cornerstone of our village, graciously and freely joining Mrs. Aaron in giving their presence and resources toward making our city a better place."

Son of the South

Born Henry Louis Aaron on February 5, 1934, in Mobile, Alabama, he was one of seven children in a poor Black family in the segregated South. He defied the poverty and racial hatred he faced with perseverance and grace, eventually becoming one of the greatest to ever play the game.

He began his career by playing semi-professional ball while still in high school, eventually joining the Indianapolis Clowns of the Negro American League in 1951. It was then that he received offers from the Major League Baseball (MLB) New York Giants and Boston Braves. He joined the Braves franchise where he played for their minor league farm team, the Eau Claire Bears. He was named the league's Rookie of the Year in 1952.

Despite the difficulties of life as a Black man in the racially hostile South, Aaron's outstanding performance allowed him to move up through the ranks, eventually getting his first Major League start in 1954. His performance on the field, as well as his hitting prowess, quickly earned him the nickname "Hammerin' Hank."

Though Aaron was a skilled base runner and right fielder, winning the prestigious Golden Glove award three times, it is his hitting that he was famed for. He finished his career with a .305 lifetime batting average and still — 44 years after his last game — holds the MLB record for most runs batted in (2,297), second most home runs (755), third most hits (3,771) and fourth most runs (2,174).

Yet for all of those achievements, his most legendary single moment on the field came on April 8, 1974. Aaron had been closing in on Babe Ruth's record of 714 home runs and on that night, facing Los Angeles Dodgers' pitcher Al Downing in the fourth inning, he finally broke it by blasting a shot over the left-field fence.

Much more than a hit

Aaron was no stranger to being hated for his skin color, he had experienced it throughout his life. But he rarely spoke of the threats he faced leading up to that night, more about the harm such hate caused family and teammates.

That hatred built as he approached the milestone and later Aaron shared letters sent to him with close friends. Former MLB Commissioner Bud Selig described as "vile" one such letter, which read: "You are [not] going to break this record established by the great Babe Ruth if I can help it. Whites are far more superior than jungle bunnies. My gun is watching your every black move."

Selig would say of the letter: "You cannot comprehend that someone would be so moved to write something like that about another human being. I think anyone who knew Henry Aaron would tell you the same thing, that he was one of the finest and most decent people to walk this earth."

After ending his playing career, Aaron worked as an executive for the Braves organization before going on to be a successful business man, owning a number of car dealerships and restaurants around his hometown of Atlanta.

Aaron was the object of intense hatred once more in later life when he spoke to the USA Today newspaper about the state of race relations in the US in 2014, saying: "We have moved in the right direction, and there have been improvements, but we still have a long ways to go in the country. The bigger difference is that back then they had hoods. Now they have neckties and starched shirts." As in 1974, the hate mail poured in. Aaron knew it would but refused to stay silent.

Speaking of his role in society, Aaron said he knew: "God put you here for a reason. And the reason he put you here is not for you to stand still. He put you here to make you understand that ... you gotta do all you can to try and make things better for other people."