FC Barcelona beat Las Palmas in a league game which was played behind closed doors. There was talk of postponing the match due to the unrest surrounding the secession referendum in the Spanish state of Catalonia. 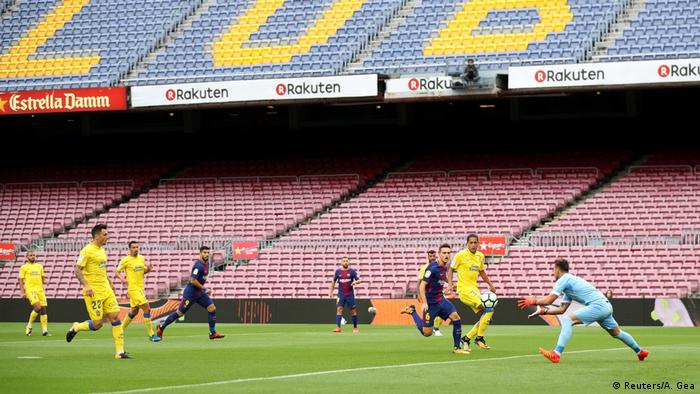 FC Barcelona's La Liga match against Las Palmas was played behind closed doors on Sunday in protest at the unrest surrounding the Catalan independence referendum.

The game, which Barcelona won 3-0 thanks to second-half goals from Sergio Busquets and Lionel Messi (2), was played against an eerie backdrop of 99,000 empty seats in the Camp Nou.

Speaking to broadcaster beINSPORTS, Barcelona club president Josep Maria Bartomeu Floreta confirmed that "We are playing behind closed doors as a protest at what has happened [in the region], not for security reasons. The Mossos [Mossos d'Esquadra, the police force of Catalonia] have guaranteed security."

Catalonia held a referendum on independence from Spain on Sunday which has been declared unconstitutional and illegal by Spain's high court.

FC Barcelona had received numerous requests from supporters to postpone their game against Las Palmas and some reports in Spain suggest they applied for its cancellation to the Spanish League.

It was ultimately decided that the game should go ahead without spectators with thousands locked out of the Camp Nou. A club statement said: "FC Barcelona condemns the events which have taken place in many parts of Catalonia today to prevent its citizens exercising their democratic rights."

The statement added: "Given the exceptional nature of events, the Board of Directors have decided that the FC Barcelona first team game against Las Palmas will be played behind closed doors following the Professional Football League's refusal to postpone the game."

President Bartomeu then confirmed that the decision was taken on protest rather than security grounds.

Barcelona's opponents Las Palmas from the Canary Islands wore a specially-produced kit for the game featuring the date and a Spanish flag. The club explained their decision in a statement saying: "Las Palmas had a choice between limiting itself to silence at this historic crossroads or by taking a side. We have decided upon the latter."

The October 1 independence vote will decide whether Catalonia would break away from Spain or not. For football fans, an equally important question is where would the Barcelona football club play if the "yes" vote wins? (30.09.2017)