Barcelona beat Arsenal 2-1 to win the 2006 Champions League Final in a classic in the Stade de France on Wednesday night. The Catalans hit two goals in the last 10 minutes to turn a game which was slipping away. 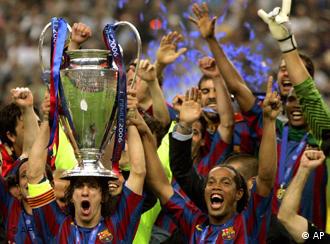 Fans from London and Barcelona had been flooding into the French capital for most of Wednesday, many without tickets, for what was billed as the most exciting European Cup final in years.

Now known as the Champions League and unrecognisible from the knock-out format of old, the prestige of the competition remains and both Barcelona and Arsenal traveled to Paris with their eyes on the most coveted club prize in European soccer and the legacy that belongs to it.

The winners would be awarded not only the trophy known as "old big ears" but the accolade of being the best team on the continent. 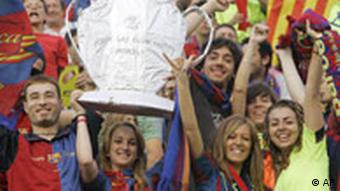 Those who got in expected a spectacle

It would be a title justifiably awarded to both teams. Barcelona -- with their flair and flow, led by the incredible talents of the Brazilian Ronaldinho -- and Arsenal -- the aristocrats of English soccer, fronted by one of the most devastating attackers in the history of the game, Thierry Henry. Two teams capable of rapid attacking soccer and prodigious skill, filled with quality from back to front.

The match was sold as Ronaldinho versus Henry but neither team are a one-man show. Eto'o, Deco, Marquez, Cole, Ljungberg, Pires... Both sides started the game bursting with stars.

But unsurprisingly it was Henry who made the first -- and second -- chance, initially spinning away from Rafael Marquez in the area after being slipped in by Alex Hleb only to be thwarted by Valdes. From the corner, Henry whipped a vicious low shot at the keeper from distance which Valdes palmed away. The game was barely three minutes old.

The young Arsenal team had set their stall out early and were dictating the pace, obviously not in awe of the team they were facing. Barca seemed stunned but only momentarily. Ludo Guily was soon testing Jens Lehmann after Ashley Cole has slipped on the left. Germany's Numer One comfortably held the rising shot from the Frenchman.

It was no shock that Arsenal coach Arsene Wenger had picked out Ronaldinho as Barca's main creative threat. Each time the Brazilian received the ball he found two Gunners stifling his progress.

Due to Arsenal's crowding tactics, Ronaldinho's first effort on goal had to come from a free kick in the 15th minute but the distance was too much even for him and the shot flew well wide of Lehmann's goal. 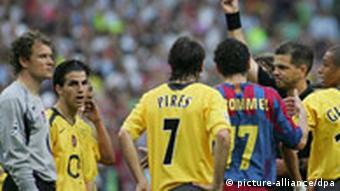 Just when the final looked to be settling down, drama struck in Paris. A Ronaldinho slide rule pass put Samuel Eto'o through on goal; Lehmann raced off his line and hauled the Barca attacker down on the edge of the area. As the last man, the referee had no choice and the German keeper saw red. Arsenal substituted Robert Pires for Manuel Almunia and the new keeper's first job was to watch Ronaldinho's free kick fly just wide.

In the following minutes, the game looked like it could boil over, swinging from beauty to ugliness in a flash of studs. Eboue scythed down van Bronkhurst in a red mist and moments later Kolo Toure was mugged by Edmilson in a revenge attack. Bodies started to litter the field and the tempo suffered.

When the game recovered, Barca began to dominate. Eto'o was tormenting Eboue at will on the right while Guily continued to test Cole on the left but despite their dominance, Barca could not find a way though Arsenal's famously stingy back line.

And it was a stalwart from that defensive wall which remarkably broke the deadlock and made the Spanish giants pay. After Eboue had been body-checked by Carlos Puyol on the edge of the Barca area, Thierry Henry floated an inch perfect free kick into the six-yard box where Sol Campbell rose above the static Catalan defense to power a towering header past Valdes to put ten-men Arsenal in the lead. 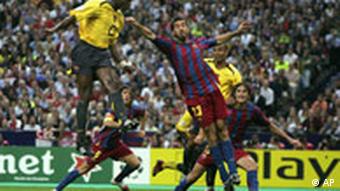 Barcelona responded in marauding style. Wave after wave of attacks flowed as the clock ticked down to half-time and the Catalans almost achieved parity in style when Eto'o spun away from the Arsenal defense on the edge of the penalty area. His shot looked destined for the top corner but Almunia got a finger to the ball and tipped it on to the post. Ronaldinho swung a leg at the rebound but the volley had no direction.

The second-half started with Barcelona showing more purpose. Two minutes after the restart, Deco, a Champions League winner with Porto in 2004, rifled a low shot straight at Almunia after good work by van Bommel on the right.

Minutes later, Barca substitute Andres Iniesta rode a flurry of tackles to bear down on the Arsenal goal but again Almunia was equal to the shot when it came.

Barca camped in Arsenal half in frantic search for equalizer

Frustration was beginning to creep into the Barca players. Even a centrally located Ronaldinho free-kick on the edge of the box was charged down by the Arsenal defense. Seconds later, the Brazilian tricked his way into the box only for his deft flick to be punched away by Almunia.

Arsenal were playing a dangerous game; protecting a one-goal lead against a team full of attacking panache and hoping to hit the Catalans on the break. Barca increased their attacking chances by taking off midfielder van Bommel and bringing on Henrik Larsson with half an hour to play.

But the Londoners almost got their reward for the risks they were taking. Fabregas robbed Guily on the left as Barca swarmed forwardand played in Henry. His square ball across the penalty area was hit firmly by Hleb but the rushed shot flew wide.

Five minutes later, Fredi Ljungberg should have sealed the match, breaking down the left and into the box before firing his shot high. Valdes touched the ball over but the resulting corner was wasted. Henry then had a great chance to get the goal he so desired when he broke free but his shot was too close to Valdes. Seconds later at the other end, Ronaldinho also fluffed a great chance, dragging a shot wide of the post from ten meters.

Fifteen minutes to go and Samuel Eto'o made no such mistake. A great ball from midfield evaded Arsenal's defense and a clever step-over by Larsson allowed the ball to run to the Cameroon striker who swept his shot past Almunia from close range.

Two minutes later and Arsenal's dream to a severe blow. Larsson again was the provider as the Swede slipped a delicate reverse ball into the path of second substitute Juliano Belletti who cracked a shot between Almunia's legs and into the net.

Arsenal were spent and had nothing in reserve as time ran out, leaving Barca to run the clock down. It was a cruel end to a brave performance from the Londoners but Barcelona made the extra man and, in the end, extra class pay.

The final whistle brought ecstatic scenes from the Barcelona players and fans leaving the Arsenal players crushed. Barcelona were European Champions and deservedly so, not just from the performance on the night but for a season during which their beautiful game had lit up the global game.

Paris was awash with English and Spanish soccer fans on Wednesday all heading up to the Stade de France for the most eagerly-anticipated Champions League final in years. (May 17, 2006)