Bangladesh′s response to Sundarbans oil spill slammed | Asia| An in-depth look at news from across the continent | DW | 15.12.2014

Environmentalists and common citizens have criticized Dhaka's response to the oil spill in the country's largest mangrove forest, which is threatening aquatic life in the UNESCO World heritage site. The Bangladeshi authorities say a huge clean-up is underway in the Sundarbans delta. On Tuesday, December 9, a tanker sank and dumped hundreds of liters of furnace oil into the country's protected delta after a collision with another vessel. The oil has spread over 350-square-kilometer area straddling Bangladesh and India. Officials in New Delhi say they are on high alert to deal with the likely flow of oil into their waters.

According to Abul Kalam Azad, a Bangladeshi forestry official, the tanker had been retrieved from the Shela River and towed to a nearby river island. The Bangladesh Inland Water Transport Authority (BIWTA) said the fishermen had been deployed for the next three days to remove the oil. 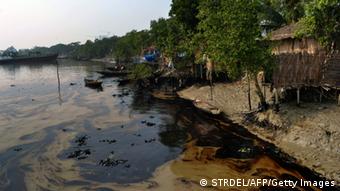 The spill will have a long-term ecological impact, say experts

On Saturday, December 13, the minister enraged the environmentalists by claiming that the spill impact would cause "no major damage" to the mangroves. The activists promptly decried Khan's statement and expressed concern about the biodiversity of the 140,000-hectare Sundarbans, which is one of the largest mangroves in the world, and a sanctuary for rare Ganges and Irabati dolphins, the Begal tiger, estuarine crocodile and Indian python.

Maqsood Kamal, a Bangladeshi disaster management expert, blamed the authorities for their slow response to the catastrophe. "For nearly 30 hours, the government did not do anything. Had the officials taken immediate measures, things could have been under control by now, but the spill is now spreading," Kamal told DW.

"It will have a long-term impact on the biodiversity of the area. In other parts of the world, there is a proper disaster management system; in Bangladesh, we are usually mere spectators of the crisis," he added. 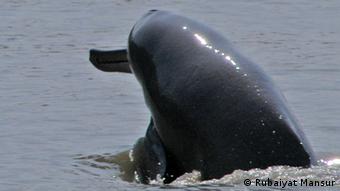 Sundarbans is a sanctuary for rare Ganges and Irabati dolphins

Pauline Tamesis, country director of the United Nations Development Programme in Bangladesh, also expressed alarm over the incident and said that Dhaka should immediately halt the commercial shipping routes through the forest.

On Sunday, a Bangladeshi newspaper published the photo of a dead dolphin, claiming it was found near the accident site. It could not be verified if the mammal had died because of the oil spill.

Moirul Khan, a zoology professor at Dhaka's Jahangirnagar University, warned the spill could be "the largest catastrophe to have happened in this fragile mangrove ecosystem."

Meanwhile, Bangladeshi citizens vented out their anger and frustration against the authorities for their disaster response. They criticized Shahjahan Khan for downplaying the impact of the spill, and posted photographs of the dead animals on Twitter as proof of the intensity of the ecological crisis.

A cleanup operation has begun in Bangladesh after a huge oil spill in the country's largest mangrove forest, a protected area home to rare dolphins. Experts worry that the damage may already be done. (12.12.2014)