Bangladeshi bloggers pay the price of upholding secularism | Asia | An in-depth look at news from across the continent | DW | 30.03.2015

Washiqur Rahman, the latest Bangladeshi blogger who has been hacked to death, was not very famous. But Islamists generally consider secular bloggers a big threat due to their growing influence in Bangladeshi society. 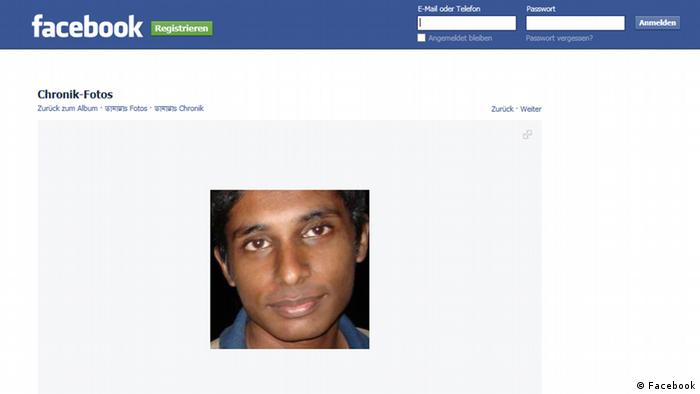 Washiqur Rahman was attacked with machetes near his home in the capital Dhaka on Monday, March 30. The 27-year-old blogger was taken to the Dhaka Medical College Hospital, where the doctors pronounced him dead.

"They hacked him in his head and neck with big knives and once he fell on the ground, they then hacked his body," he added.

Rahman was an atheist blogger who wrote under the pen name Kutshit Hasher Chhana, meaning Ugly Duckling, on Facebook. There he posted his thoughts on religious fundamentalism, fellow writer, Asif Mohiuddin, told news agency AFP via Facebook from Berlin. 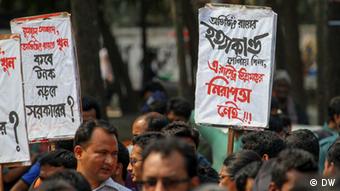 Rahman, however, was not as famous a blogger as US national Roy, therefore it comes as a surprise for many that Babu had been targeted.

As Imran Sarker, head of Blogger and Online Activists Network in Bangladesh, told DW: "Washiqur Rahman was not really a very influential blogger. Most of us bloggers did not know him, and he has not done anything spectacular or important, to my knowledge. He was targeted because open-minded and progressive bloggers are being targeted in general. They are killing those who are easy to access, when they get the opportunity... The main attempt is to create fear among bloggers."

Of the three youth who attacked Rahman – all in their twenties – two have been apprehended while the third managed to escape.

Another Bangladeshi blogger has been hacked to death in the country's capital Dhaka. Police arrested two suspects near the scene after the latest attack targeting atheist writers in the predominantly Muslim country. (30.03.2015)

The murder of the Bangladeshi author Avijit has cast a shadow over the country. Because of a handful of hardliner extremists, Bangladesh risks becoming a place of endless feuds, writes BRAC's Asif Saleh. (13.03.2015)

The killing of Avijit Roy underscores the fact that there is an emerging pattern in Bangladesh to silence the opinions of those that certain radical elements perceive as being a threat, Dr. Tazreena Sajjad tells DW. (05.03.2015)

Avijit Roy, the blogger slain on Thursday night at Dhaka University in Bangladesh, was among the most well-known writers in the country. He had been nominated for DW's 2014 "The Bobs – Best of Online Activism" award. (27.02.2015)

Both the suspects who have been arrested are students of Islamic schools, one of them coming from the Hathazari madrassah in the southeastern district of Chittagong. He came to Dhaka only the day before the attack and had spent the night in a mosque, he told the police. He claimed to have stabbed Rahman "because he humiliated my prophet."

A threat to fundamentalists

Rahman's death highlights the fact that bloggers are being consciously targeted by certain groups.

"Bloggers are very influential in the Bangladesh society," Sarker told DW. "Sixty percent of the population in Bangladesh are below the age of 35. Among those involved in online activism, the majority are young people. This is also important in the political field, because a major part of the voters are young," he added.

Rahman's murder can also be seen in the context of the struggle between secular and fundamentalist forces in Bangladesh, said Sarker.

"There is a political aspect to that struggle between those who are promoting political Islam to turn Bangladesh into a fundamentalist, religious state and the secular political forces. The more radical branches of the Islamic organizations are gaining strength by the day," underlined the expert.

Islamists consider these young bloggers to be the major hindrance in the struggle to create a fundamentalist Bangladesh as opposed to the secular republic that emerged from the 1971's "War of Independence," according to various observers.

"That is why (the bloggers) have become the main target, and the political parties who are supposed to prevent such attacks and provide security to them seem unable to do so. The main problem is that even mainstream political parties prefer to compromise with these radical groups to remain in power," said Sarker.

Targeted from all sides

Dr. Tazreena Sajjad, Bangladesh expert and Professorial Lecturer at American University, is of the view that this use of extreme targeted violence against individuals with certain expressed religious and philosophical orientations is relatively new in Bangladesh. However, she adds, it is critical to keep in mind this is happening within a hyperpolarized political context where violence is used on a regular basis. 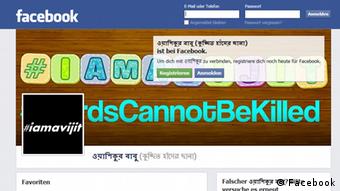 "In recent years, violence has frequently been instrumentalized to intimidate, harass and abuse people with different political affiliations and from different sections of the society who are just trying to go about their lives," Sajjad told DW. "It also exposes the level of political volatility at play, the weakening law and order situation in the country, and a virulent strain of political and pseudo-religiosity that is trying to move from the obscure margins to the mainstream."

Secular writers and bloggers are not only under attack from extremists; Bangladesh's liberal government of Prime Minister Shaikh Hasina too is not very friendly towards them.

In 2013, when four online writers were arrested on charges of "hurting religious sentiment through their writings against Islam," the Islamists took to the streets to demand the death penalty for the bloggers. Instead of defending the bloggers, PM Hasina said her government would take action against anyone defaming Islam. In a meeting with some Islamic scholars who sought action against the bloggers, Hasina said that her government was indeed serious about taking action against people involved in anti-Islam blogging. However, the PM rejected the demands of new blasphemy laws from the opposition.

A number of Bangladeshi and international rights organizations, including Reporters Without Borders, have been critical of the bloggers' intimidation both by Islamists and the government. "The persecution of atheist bloggers is the result of a political desire to restrict freedom of expression and reinforce censorship in the name of combating blasphemy … This is unacceptable and contrary to all the fundamental freedoms we defend," according to a Reporters Without Borders statement.