More than 30 workers have died after an explosion and fire engulfed a factory that produces packing for brands like Nestle. The father of one of the victims has filed suit against the building owner for manslaughter. 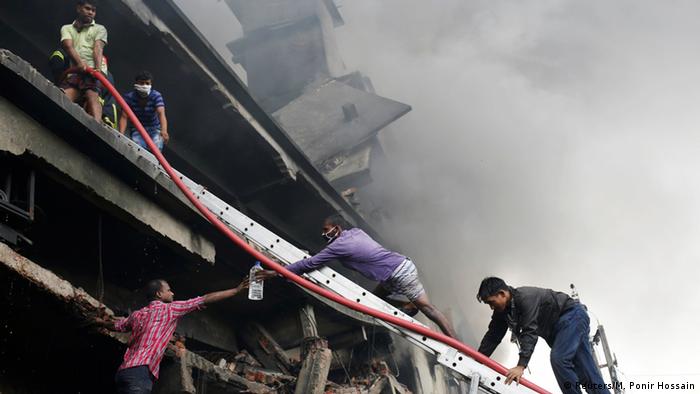 Officials announced on Monday that the death toll from an accident at a packaging factory in Bangladesh had risen to 31 as more bodies were discovered in the debris. The incident at the Tampaco Foils Ltd. plant in the capital Dhaka began on Saturday after a boiler exploded and caused the building to swiftly erupt into flames.

The blast and ensuing blaze killed 23 workers almost instantly, and eight more bodies were discovered on Sunday and into early Monday, the Associated Press quoted a local administrator as saying. He added that at least eight workers were still missing.

Authorities have not yet determined the exact cause of the explosion. Although they investigators initially suspected that the boiler was faulty, they later said they were looking into a possible gas leak.

It has also emerged that highly flammable chemicals were stored in the factory that produces packaging materials for tobacco companies and Swiss food conglomerate Nestle. The accident occurred right as the night shift was handing over to the morning shift, resulting in an unusually high number of workers being present.

Dozens of employees were still in the hospital on Monday being treated for burns and related injuries, including six in critical condition.

German news agency DPA reported that the father of one of the deceased had filed suit against the factory's owner, Syed Mokbul Hussain, a former lawmaker, and eight others for culpable homicide.

The incident once again thrust Bangladesh into the international spotlight over working conditions. In 2013, the collapse of the Savar Building in Dhaka's Rana Plaza, which supplied clothes to global retailers like Primark and Wal-Mart, killed 1,135 in the country's worst industrial disaster.

Although 42 managers and building administrators were charged with murder over the tragedy, and the Bangladeshi government vowed to step up safety regulations for factory workers, industrial watchdogs argue that not much has changed since the Rana Plaza collapse. A 2015 Human Rights Watch report slammed Dhaka for allowing "deplorable" conditions to thrive in the name of economic development.

A top leader of the Jamaat-e-Islami party has been hanged after his conviction by a controversial war crimes tribunal. He is the fifth leader from the party to be executed since 2010. (03.09.2016)

Bangladesh's security personnel have killed a man they believe trained militants who attacked a cafe in the capital in July. At least 20 people, including foreigners, were killed in the strike. (03.09.2016)