Bangladesh has executed an Islamist opposition leader sentenced by a special tribunal to death for war crimes. Muhammad Qamaruzzaman was hanged after the country's top court rejected his appeal. 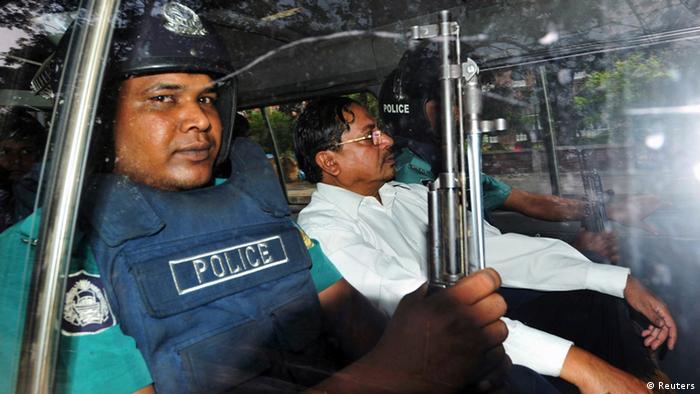 Bangladesh's law and justice minister, Anisul Huq announced late on Saturday that the death sentence against Qamaruzzaman had been carried out.

The 62-year-old Qamaruzzaman, who was an assistant secretary-general of the of the opposition Jamaat-e-Islami party, was put to death by hanging at Dhaka's Central Jail.

This came just days after Bangladesh's Supreme Court rejected Qamaruzzaman's final appeal against the sentence handed down by the International Crimes Tribunal for his role in mass killings, torture and abduction committed during the country's war of independence from Pakistan in 1971.

In May 2013, the tribunal, which was set up four years ago to prosecute people suspected of crimes stemming from the conflict, found Qamaruzzaman guilty of crimes against humanity for his role as one of the leaders of a pro-Pakistan militia involved in mass killings, abductions, torture, rape, persecution and complicity in torture.

Since the Supreme Court rejected his appeal on Monday, Qamaruzzaman had declined to apply for clemency from the country's president, Abdul Hamid.

Just hours before he was put to death, members of his family visited him at the prison, which was surrounded by tight security.

"We found him in good health and not worried about his fate at all," his eldest son Hasan Iqbal told AFP afterwards. "In his last comments, he regretted that he did not see the victory of the Islamic movement in Bangladesh. But he was confident that it would be victorious here one day," he added.

Fearing possible trouble as a result of the execution, the Border Guard paramilitary force was deployed across the country on Saturday.

Qamaruzzaman is the second Islamist to be executed for crimes committed during the war. Abdul Quader Molla, the fourth-highest ranking leader of Jamaat-e-Islami, was hanged in December 2013.

Most of the leading figures in Jamaat-e-Islami, which opposed separation from Pakistan, have been convicted of war crimes by the tribunal and several have been sentenced to death. The party claims the trials and convictions are politically motivated.

A Bangladeshi court has sentenced leading Islamist Abdus Subhan to death after convicting him of war crimes. Opposition leaders say the ruling is less about justice and more about eliminating political opponents. (18.02.2015)

A tribunal in Bangladesh has sentenced a senior member of the Islamist party to death for atrocities committed during the country’s 1971 independence war. He is the 16th person to be convicted in the war crimes inquiry. (30.12.2014)

A former junior minister who served under Bangladesh's military dictator in the 1980s has been convicted of crimes againist humanity. The offenses stem from Bangladesh's bloody war of independence. (23.12.2014)