The police in Bangladesh have arrested one of the suspected "masterminds" behind a deadly attack on a bakery in Dhaka, which claimed 29 lives. The suspect allegedly led many other attacks on religious minorities. 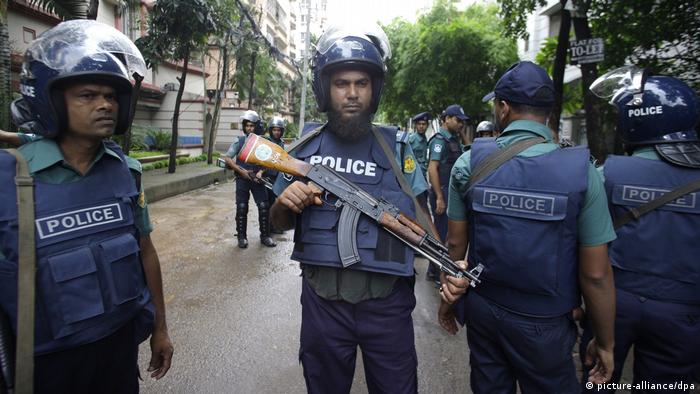 The suspect, Jahangir Alam, was detained by counterterrorism forces in a pre-dawn raid, a police spokesman said on Saturday. Authorities believe Alam is one of the leaders of the Bangladeshi jihadist group Jumatul Mujahedeen (JMB), responsible for the July attack in downtown Dhaka.

"He is one of the main masterminds of the Holey Artisan Bakery (cafe) attack," deputy commissioner of the Dhaka police force, Yusuf Ali, told the AFP news agency.

According to Sanwar Hossain from the counterterrorism unit, Alam was close aide to Tamim Chowdhury, a Bangladeshi-born Canadian who is considered the main plotter of the deadly café siege.

Foreigners killed in the siege

The 32-year-old Alam met with Chowdhury at a Dhaka hideout where they planned and organized the attack, Hossain said.

Terrorists killed more than 20 hostages during the ten-hour siege, including nine Italians, seven Japanese, an Indian, and a Bangladeshi-born US citizen. Five attackers, two policemen and chef believed to be an accomplice of the militants, were also killed.

In addition to the bakery attack, Alam "led around two dozen attacks on religious minorities outside the capital," Hossain added.

The bakery attack prompted the government to launch a crackdown on Islamic extremists in the Muslim-majority country. Since July, security forces have killed some 50 jihadists, including several leaders of the JMB militia.

The secular government in Bangladesh has been facing a wave of Islamist killings an attacks. Some, like the café siege, were also claimed by the Islamic State, while al Qaeda implied its role in others. However, the authorities have consistently denied that international groups are active in the country, pointing the finger to homegrown extremists instead.

Two extremists were killed in Dhakain another anti-terrorist raid last week, including Nurul Islam Marzan, who is also belived to be one "one of the masterminds" behind the siege.

Iran: President Rouhani hopes for 'easy' return to pre-Trump relations with US 48m ago