Bangladesh has arrested a British national and a student at a Canadian university in connection with last month's deadly Islamist terror attack on a restaurant. The two men's families said they were innocent bystanders. 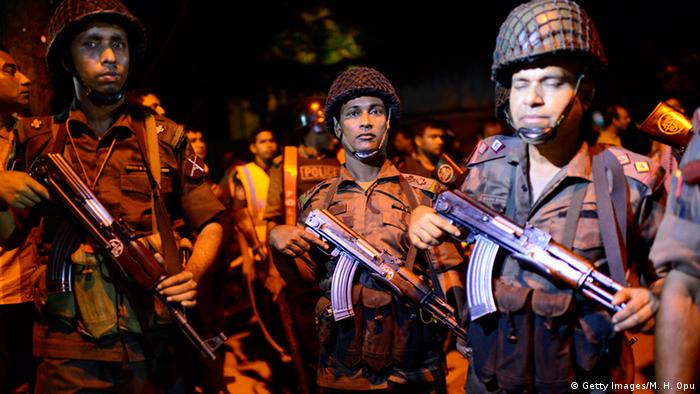 British national Hasnat Karim and a Bangladeshi student who studies in Canada, Tahmid Hasib Khan, were arrested on suspicion of playing a role in the July 1 attack on Dhaka's Holey Artisan Bakery, police said.

The two were at Dhaka's Holey Artisan Bakery the night gunmen killed 20 people, mostly foreigners, and two policemen before a police raid ended the hostage standoff.

This is the first time Bangladeshi authorities have recognized they were holding Karim and Khan. The men's families and human rights organizations have accused authorities of holding them incommunicado.

The two men's families have said authorities no evidence Karim and Khan had any role in the attack and were innocent bystanders.

Karim was a lecturer at a private university in Dhaka where two of the five gunmen in the attack had studied. At the time of the attack he was the director of his father's engineering company. Khan was visiting home on vacation from the University of Toronto.

Police have named Tamim Chowdhury, a Canadian citizen, as the mastermind behind attack.

The Islamic State claimed credit for the attack, but Bangladesh has consistently denied the extremist group has a presence in the country. They have instead blamed domestic Islamic terrorist groups for the attack and others that have targeted journalists, activists and others in a spate of violence over the past three years.

The Bangladeshi opposition accuses Prime Minister Sheikh Hasina of using terror threats to consolidate her power. Human rights groups have also voiced concerns over arbitary arrests and absence of rule of law as the country clamps down on Islamist attacks.