Throughout Friday night, the U.S.-led coalition began to deliver their massive bombing campaign against the regime of Saddam Hussein. On the ground, an entire Iraqi division reportedly surrenders. 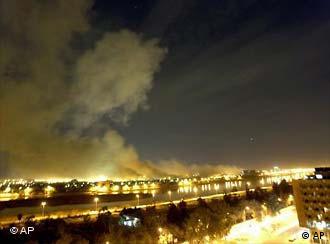 Taking a hit: Smoke billows from explosions during the heavy bombardment of Baghdad on Friday.

A huge explosion shook the center of Iraq's capital before dawn Saturday, hours after the most ferocious attack of the war left Saddam Hussein's Old Palace in flames.

Aircraft could be heard overhead, but it was unclear what had been targeted. Following the single blast, the sound of sirens cut through the city. 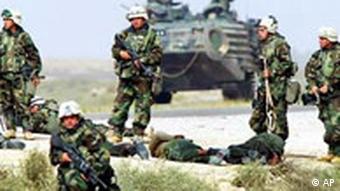 On the ground, U.S. armored columns had pushed up to 125 miles north across the desert toward Baghdad in a pincer movement by Saturday morning, Reuters journalists with U.S. forces said. One armored column headed through the western desert and another ran into opposition near Nassiriya, a city on the Euphrates River.

The drive proceeded as Iraqi forces began to disintegrate. The commander of Iraq's 51st Division surrendered on Friday, U.S. officials said. Then, about 8,000 of his troops laid down their weapons and turned over their 200 tanks. The surrendering soldiers were not the fabled Republican Guardsmen who anchor Saddam's defense. For the most part, these were rag-tag soldiers, many of them draftees, often in T-shirts. Their small arms could accomplish little against opposing forces wielding 21st century weaponry. The British newspaper The Times also reported on Saturday that some Iraqi soldiers had shot their officers in order to surrender.

While the U.S.-led war proceeded smoothly in the south, it faced a possible complication in the north. News agencies reported that about 1,500 Turkish troops entered into northern Iraq just before midnight, a move made against the will of the Bush administration. Just a few hours earlier, Turkish Foreign Minister Abdullah Gül warned that Turkish troops would soon be entering Iraq in order to prevent a flood of refugees and to prevent "terrorist activities."

On Saturday, Kurdish sources in the area said they could not confirm the troop movements.

Northern Iraq is populated mostly by autonomous Kurds, and Turkey fears they may attempt to create a Kurdish state that could destabilize parts of Turkey.

In Washington, U.S. Defense Secretary Donald Rumsfeld said he was pleased with the course of the war. "The confusion of the Iraqi officials is growing," he said on Friday. "Their ability to see what is happening on the battlefield, to communicate with their forces and to control their country is slipping away."

Nonetheless, Saddam has not given up the fight. According to Iraqi television, Saddam has promised coalition soldiers that they will be treated in accordance with the Geneva conventions if they are captured. He also has promised to pay rewards to soldiers who join the fight. Any soldier who downs a coalition plane stands to gain 100 million dinar (about €31,000 on the black market). A soldier who captures an enemy soldier will get 50 million dinar and one who kills an enemy solider 25 million.

The Friday night barrage filled the sky with towering fireballs as the Tomahawk cruise missiles hit, and air raid sirens squealed. At one point, a half-dozen adjoining plumes of smoke twisted into the sky.

About 320 Tomahawks were fired during the night from coalition ships in the Persian Gulf and Red Sea. Two Iraqi palaces were among the buildings destroyed by the third missile attack on the city in two days.

"The earth is literally shaking," Reuters correspondent Khaled Oweis said on Friday night as he watched the assault.

The attack was apparently coordinated to simultaneously strike against Baghdad and two other cities, Mosul and Kirkuk, in the north. The Iraqi defense minister, speaking as the missiles fell, said the coalition was also targeting the southern cities of Basra and Nassiriyah.

The Pentagon confirmed Friday that the "shock and awe" bombing campaign on Iraq had started. U.S. officials said several hundred targets would be hit in the coming hours with as many as 1,500 bombs and missiles.

The latest attack came as the coalition suffered another fatal helicopter accident, its most serious source of casualties since the conflict began early Thursday. Two British Sea King helicopters collided over the Persian Gulf early Saturday, killing seven crewmembers, British officials said. The Sea King is a multi-purpose helicopter that can be used to track submarines, haul cargo or provide search and rescue support.

On Friday, eight British and four U.S. Marines died when their CH-46 Sea Knight helicopter crashed about nine miles south of the Iraqi border town of Umm Qasr. Military officials said no hostile fire was reported in the area. The Marines use the Sea Knight to provide all-weather, day-or-night assault transport of combat troops, supplies and equipment.

Two other U.S. Marines were killed in action on Friday. 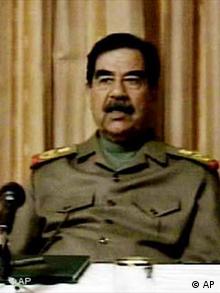 British and U.S. officials said they were unable to confirm a media report that Saddam (photo) had been killed or injured in the first air strike on Baghdad. Britain's defense chief, Admiral Sir Michael Boyce, told BBC Television: "I'm certainly unaware of Saddam Hussein's status at the moment." Rumsfeld said he wasn't sure whether Saddam was still in control of Iraq, although he maintained that the Iraqi regime was beginning to lose control.

Iraqi officials rebuffed speculation their leader had been killed. Saddam last appeared on Iraqi television early on Thursday as the strikes began.

On the ground, British troops aimed to seize control of the southern Iraqi city of Basra on Friday night. Earlier, Marines from both the United States and Britain captured the port of Umm Qasr after a combined attack from air, sea and land. On Saturday, Marines were encountering further resistance in the city. A large body of troops was continuing to push east toward Basr, leaving the Stars and Stripes flying over the occupied city.