The offices of two Islamist groups suspected of trying to turn Germany into an Islamic theocracy have been raided by federal security forces. Authorities said there was no suspected link to terrorist groups. 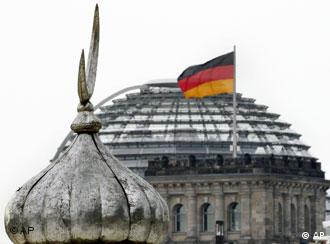 The groups may be working for an Islamic theocracy

Authorities searched property belonging to the groups Invitation to Paradise, with offices in Moenchengladbach and Braunschweig, and the Islamic Cultural Center of Bremen, in the city-state on the North Sea coast, as well as the private residences of some members.

The Interior Ministry said in a statement that both organizations were suspected of working against constitutional order to establish an Islamic state in Germany, and that the raids had been planned for some time and were "in no way connected to the threat of international terrorism."

The statement also described the groups as "Salafist," an extreme brand of Islamic fundamentalism which the Federal Office for the Protection of the Constitution says does not strictly condemn the use of violence.

A prominent member of Invitation to Paradise is the convert and boxer-turned-preacher Pierre Vogel, also known as Abu Hamza, who has appeared on talk shows advocating for the introduction of Sharia law in Germany. However he has also condemned the use of terror in the name of Islam.

Federal authorities said the Islamic Cultural Center of Bremen is ideologically and organizationally close to Invitation to Paradise. Vogel and Invitation to Paradise have recently made local headlines after residents of Moenchengladbach and Braunschweig staged protests against the group.

A survey recently conducted by the University of Muenster has found that Germans are considerably more negative in their views about Muslims and Jews than their European neighbors. (02.12.2010)

The German constitution declares that there shall be no state church, but the government gives the main churches money and clerics give sermons on public television. Time to put a stop to that, says a new lobby group. (21.10.2010)

Germany's top-selling non-fiction bestseller is a book that attacks Islam - and the German president can't get the public to agree with him when he says that Islam is part of Germany. (20.10.2010)