An Austrian court has refused to extradite Ukrainian billionaire Dmytro Firtash to the US. He is wanted on bribery charges but the court said political motivations lay behind the US move. 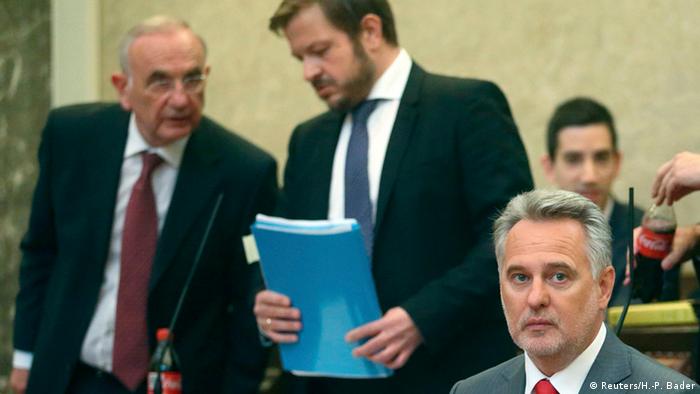 The Austrian court accepted arguments made by Firtash's lawyers, including that political motivations lay behind the US efforts to try him on corruption charges. He was accused of bribing Indian officials through US banks.

Lawyers argued the criminal case was intended to exert pressure on an influential man who Washington saw as a representative of Russian interests in Ukraine and a disruptive factor in its politics.

One of Ukraine's most influential businessmen, the 49-year-old Firtash (photo seated right) is well connected both in Moscow and with Ukrainian politicians opposed to the Kremlin. He earned millions of dollars in the natural gas trading sector under deposed pro-Russian Ukrainian President Viktor Yanukovych.

Firtash told the court in Vienna that allegations he had conspired to bribe Indian government officials to win licenses to mine titanium were "absolutely untrue." He and five business associates were charged with paying $18.5 million (16.5 million euros) in bribes to officials in the Indian state of Andhra Pradesh for licenses to mine titanium which they planned to sell to Boeing for use in building the 787 Dreamliner passenger jet.

Lawyers for Firtash said the case should be thrown out on several grounds, including a lack of evidence or US jurisdiction, and the fact that the charges against him were not crimes in Austria.

Judge Christoph Bauer ruled on Thursday that officials had failed to make a sufficient case of any wrongdoing. He said Firtash could have his passport back and leave Austria, but he kept the bail in place until the ruling became legally binding. Firtash is expected to stay in Vienna. Court spokeswoman Christina Salzborn said the case was "also politically motivated."

US prosecutors filed an appeal against the verdict.

A US grand jury in 2013 indicted Firtash, along with a member of India's parliament and four others. US authorities first made a request for Firtash's arrest in October 2013, but dropped it five days later.

A second request was made on February 26 last year, four days after the ousting of Yanukovych. Firtash was released from detention in Austria in March 2014 after posting bail of 125 million euros.

Vienna court to decide on Ukrainian oligarch's extradition to the US

Dmytro Firtash is indebted to his influential friends in Kyiv and Moscow for his fortune worth billions, which could now become his downfall. Vienna is set to decide on his extradition to the United States. (29.04.2015)

Foreigners fighting in an international legion against the Russian invasion in Ukraine accuse one of the commanders of abuse, looting and haphazard planning. DW contacted the man, who has a different explanation.