An Austrian institute has released the first specific radiation measurements from the Fukushima leak. One scientist says that radioactive cesium and iodine will likely be similar to that of the Chernobyl accident. 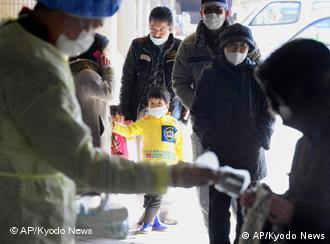 Many Japanese have been scanned for radiation

Austrian scientists have released what appears to be the first clear, independent data concerning radiation levels in the immediate aftermath of the Fukushima radiation leak.

By releasing data from two monitoring stations of the Comprehensive Test Ban Treaty Organization (CTBTO) from Japan and California, researchers from the Central Institute for Meteorology and Geodynamics in Vienna have calculated backwards to estimate the true levels of radiation from Fukushima.

A "becquerel" is the unit that measures how many radioactive nuclei decay per second, and the "source term" refers to the quantity and type of radioactive material released into an environment.

In the same statement, the Austrian institute also noted that a CTBTO station in Iceland had detected very small amounts of iodine-131 as of March 20, which does pose a health risk.

'Likely in the same order of magnitude' as Chernobyl 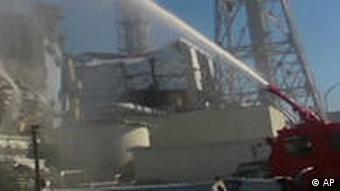 Iodine-131 is of particular concern to people living in the vicinity of the Fukushima reactor, as it can cause thyroid cancer, and cesium-137, with its long half-life of 30 years, can stay in soil and agricultural products for an extended period of time.

However, Gerhard Wotawa, the lead Austrian researcher, noted that because of the high volume of particles released only during the first four days of the leak, he speculated that further data would reveal an even higher total amount.

"The releases of the volatile radionucleotides, like iodine and cesium, are very likely in the same order of magnitude as happened during the Chernobyl accident," he told Deutsche Welle, adding that CTBTO member states, like Austria, only received data 72 hours after it was gathered via e-mail and private websites.

The organization, which was established in the aftermath of the signing of the Test Ban Treaty in 1996, has 60 radionuclide particulate monitoring stations currently in operation, one-third of which are along the Pacific Rim. The stations are constantly monitoring the air for radioactive particles, and that data is then transmitted back to member states on a regular basis.

The CTBTO, however, does not have a mandate to release radionuclide data it has collected after nuclear accidents, such as is the case in Fukushima. That said, member states could release some, or all of the data, as the Austrian representatives have done. 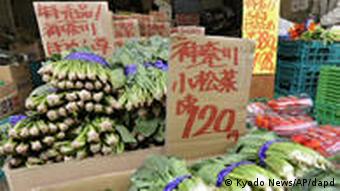 Some Japanese spinach has been found with high levels of radiation

The International Atomic Energy Agency (IAEA) has released some general information about the radioactive plume on its website, but hasn't said anything publicly about specific measurements.

"Japanese authorities have reported that the Tokyo Electric Power Company has detected radioactive materials in seawater at one location near the Southern discharge canal at the Fukushima Daiichi nuclear power plant," the agency said on its website. "Samples taken included levels of iodine-131, cesium-134, and cesium-137."

The IAEA also said on its website that the Japan Agency for Marine-Earth Science and Technology would be measuring radioactivity in seawater and air from Tuesday and Wednesday and releasing that data on Thursday.

Wotawa added that it appeared that the CTBTO data was consistent with the recent reports of food contamination.

"I think there is a quite good connection between this release term and the effects on the agricultural products that have been observed," he said.

However, other scientists are not ready to put the Fukushima fallout into Chernobyl territory just yet.

"My speculation is that it's going to be significantly less than Chernobyl fallout, but we're not going to know that until we get more data," said Jim Smith, an environmental physicist at the University of Portsmouth in the United Kingdom, in an interview with Deutsche Welle. "We're not seeing data from the immediate 20 kilometer radius of the plant."

Although the Fukushima accident is a disaster, it could have been worse. Wotawa said it was fortunate that during the first two days of the accident, when radiation was leaking at a greater rate, there were constant winds out to the Pacific.

If the winds had been blowing towards Japan, it would have been much worse, he said.

Deutsche Welle examines the environmental, business and political implications for Japan - and the world - of the country's nuclear crisis as well as the earthquake and tsunami that devastated it. (23.03.2011)

Security forces doing what they can in Japan

Just over ten days after the Japan's earthquake and tsunami, 350,000 people are located in shelters. Now, supplies have slowly started flowing in and the first provisional houses are being built. (22.03.2011)

Japan has upgraded the Fukushima nuclear crisis to a level five, of seven, calling it an "accident with wider consequences." Emergency workers were racing to stabilize reactors and minimize further threats. (19.03.2011)