Rafa Nadal is back to his best and may be on the verge of winning another Grand Slam. He could even face old friend and foe Roger Federer. The men's semifinals in the 2017 Australian Open are set. 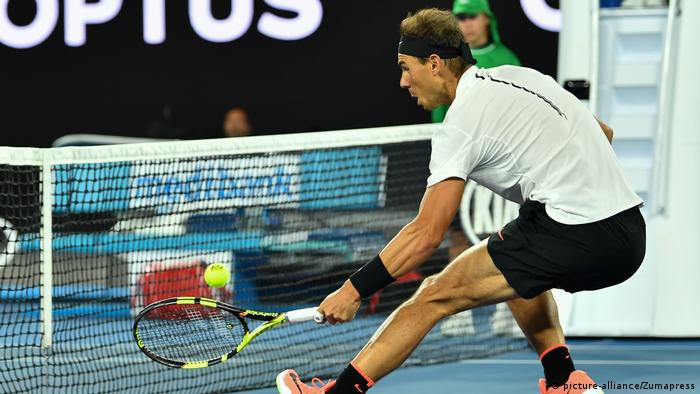 Spaniard Rafael Nadal continued his resurgence on Wednesday, ousting Canada's Milos Raonic 6-4, 7-6, 6-4 to advance to face Grigor Dimitrov in the last four. It is Grand Slam semifinal No. 24 for the ninth seed and means he couldface Roger Federer in the final.

The Spaniard won the opening set with the kind of powerful tennis that many believed he had lost, targeting Raonic's backhand and dealing with Raonic's big serve with relative ease.

Raonic took an injury break midway through the second set, and perhaps Nadal's rhythm was disrupted. Serving to stay in the set at 4-5, Nadal suddenly got sloppy and double faulted, handing Raonic two set points. But the Spaniard saved them both. The 2009 Australian Open champion handed his Canadian opponent another chance, but saved that too and went on to save his serve.

Raonic, who beat Nadal in the Brisbane International ahead of the tournament, steadied himself and served strongly to stay ahead. Nadal kept pace and so a tiebreak ensued. Both players appeared nervous, perhaps aware of the significance of winning the second set. A superb lob set up the set for Raonic, but after missing the first chance the third seed, somewhat unbelievably, double-faulted for the first time in the match.

Losing the tiebreak looked like a turning point and it was. Raonic couldn't challenge Nadal enough and so with the set on serve, Nadal cranked up the pressure before breaking to love to win the match.

"I am not a very arrogant person so I always have doubts. It's normal, even when I was winning a lot I had doubts so you can imagine when I wasn't..." an emotional Nadal said afterwards.

Earlier in the day, Dimitrov left David Goffin without a chance, sealing the win in straight sets (6-3, 6-2, 6-4) to advance to only his second Grand Slam semifinal.

"In the first set it was absolutely nerve racking," the Bulgarian said. "I felt that I could play well but I was not striking the ball as well as I could and I was a bit passive. With each game I was feeling a bit better and I was finding my groove. I'm just happy now."

Unforced errors and a blown opening service game cost Goffin, who was aiming to become the first Belgian man to reach a Grand Slam semifinal since Xavier Malisse at Wimbledon in 2002. He couldn't shake his sudden spell of poor form for the rest of the match though, and after missing the chance to convert two match points, Dimitrov eventually sealed the win with a backhand winner down the line after two hours and 12 minutes.

"I have been on a tremendous roller coaster," Dimitrov said of his last two years, which have seen him swing between the top 10 and the top 40. The victory also equalled Dimitrov's career-best winning streak of 10 matches after he won the Brisbane International in the build-up to this tournament.