Auschwitz survivor: I cannot forgive Gröning | Germany| News and in-depth reporting from Berlin and beyond | DW | 21.04.2015

Former SS officer Oskar Gröning asked for forgiveness on the first day of his trial on Tuesday. But at least one Auschwitz survivor said that was impossible, as Ben Knight reports from Lüneburg. 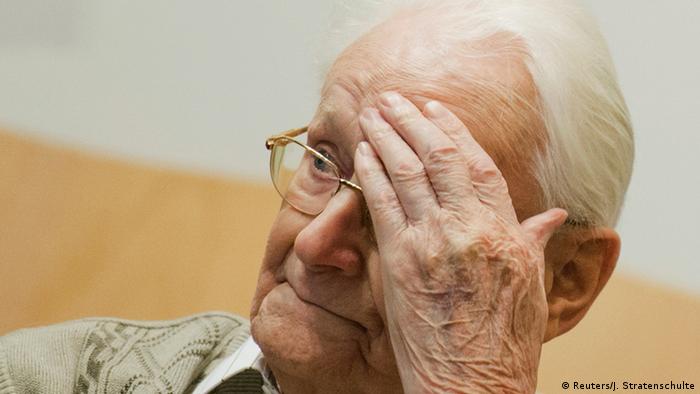 "For me it is beyond question that I made myself morally guilty," Gröning (pictured above) told the court in a long speech on the first of an expected 27 days in court. "I ask for forgiveness. You must decide on the question of legal guilt," he said to the judges.

The full reading of the charges lasted around a quarter of an hour, with the state accusing 93-year-old Gröning of passing on the luggage and valuables of new arrivals to the SS. The state is arguing that this activity meant he supported the Nazis in their systematic murder of millions of Jews, making him guilty as an accessory. The defense says that under German law his actions do not amount to accessory.

Outside the court, after a somewhat exhausting session - given that the co-plaintiffs, like the defendant, were well over 80 years old - there was an emotional atmosphere, as participants emerged into the hot sun and were besieged by camera crews and journalists. 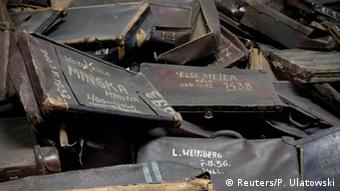 Gröning was among the first to leave, looking very frail as he was helped into a car by care workers.

Thomas Walther, attorney for over 40 of the co-plaintiffs, all Auschwitz survivors, said he had been surprised by how lucid the defendant had been in the session.

"What was certainly surprising, for a trial like this, is for the defendant to speak quite a lot," he told DW. "Mr Gröning does not give the impression that he finds it difficult to speak about these things."

Walther also said that his clients could not be expected to accept Gröning's plea for forgiveness.

"You have to understand that my clients have been convinced for the past 70 years of the real guilt of an extremely profound crime," he said. "From the point of view of a daughter or a son whose parents were murdered there, if they then hear the words 'I feel morally guilty' - that is something of a mockery of what really happened. 'Moral guilt' in the face of the murder of your parents - how would you feel?"

'He was doing a lot of lying'

Max Eisen, an 86-year-old Czech-born Auschwitz survivor, now living in Toronto, had little sympathy for Gröning. "He said he was confused when he got there, I was 15 when I arrived and I wasn't confused," he told DW. "My family were all brought to Auschwitz on a transport, it took us three days, and we arrived on this ramp - maybe he was there? I don't know. I remember seeing a lot of SS officers and men in striped outfits, slave laborers." 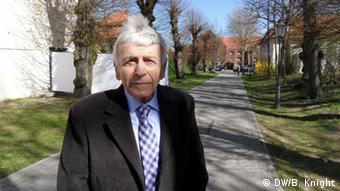 Eisen spoke freely of the experience of the transport and his arrival at Auschwitz during the two-month "Hungarian Holocaust," when 300,000 Jews were gassed in an unimaginable round-the-clock operation.

"My mother with a nine-month-old baby in her arms. My two little brothers, I couldn't see them, because we were stuck that close together. Two little guys between tall people," he said. "My father, my uncle and I were selected for slave labor, and my mother and her three children and my grandparents were shoved into the gas chamber."

Eisen also described his disgust at the way Gröning seemed to avoid the question, put to him by a judge, of whether he believed at the time that his work aided the Nazis' extermination of the Jewish people.

"He was doing a lot of lying there. He sort of gave the impression that he didn't really know," he said. "The fact was that they were on the ramp, and there was no way that they couldn't know because the SS were all in the same barracks."

Defense lawyer Hans Holtermann described his client's state after the grueling day. "It was very tiring for him," he said. "I think we saw that today, but I think he was also relieved to say what he did."

But the lawyer would not comment on Gröning's general health or his fitness to stand the rest of the 27-day trial.

Holtermann pointed out that the German court system, unlike in the US and the UK, does not allow the defendant to plead either guilty or not guilty to the charges. "Even if felt like he was legally guilty as a defendant, the court must investigate that and come to its own decision," he said.

Lawyer: Auschwitz memories 'like a knife to the heart'

The trial of 93-year-old Oskar Gröning, otherwise known as the "bookkeeper" of Auschwitz, has begun in the German city of Lüneburg. Thomas Walther, the lawyer representing the victims and their relatives, spoke to DW. (21.04.2015)

A 93-year-old is on trial for acts that date back more than 70 years. Auschwitz is a symbol of evil, and this trial also has largely symbolic importance, writes DW's Felix Steiner. (22.04.2015)

The trial of former SS officer Oskar Gröning has begun in a charged atmosphere of historical debate - and Holocaust-denial. DW’s reporter Ben Knight has witnessed the protests around the courthouse in Lüneburg. (21.04.2015)