Augmented reality ads on the rise around Europe | Science| In-depth reporting on science and technology | DW | 18.01.2011

A growing number of European startups have taken to creating virtual experiences that double as commercials. But as this sector is rapidly expanding, challenges remain. 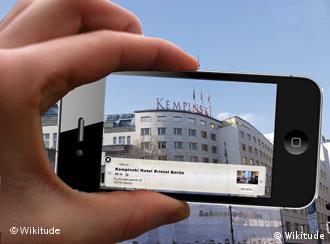 Smartphones are one way to experience augmented reality

In their recent music video, lead singer will.i.am points a Blackberry PlayBook at a billboard showing a videogame version of himself, and out pops a 3D hologram of the character who proceeds to monkey around the skyscraper.

What was a special effect in the music video became an iPhone app, which allows users to mimic this augmented reality experience.

"Technology has finally caught up with our imaginations," wrote will.i.am on the band's website last year, when the song debuted. "[Our album] is symbolic of adopting these new technologies, such as augmented reality."

Bringing the virtual world into the real world

This new ad campaign is just the latest example of augmented reality as a rising technological tool that takes the world and combines it with a layer of virtual information glued on top of it. 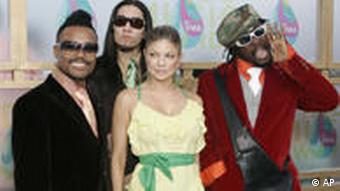 To see this augmented world, people need an AR browser, an app that has been downloaded onto a smartphone or tablet computer.

Using the phone's GPS coordinates and built-in compass, the browser can guess what a user is looking at and pull up points of interest in that line of sight.

Information about hotel room availability, or where the nearest cafe is, is then laid on top of whatever the user sees in the phone's camera view - so people can click on and explore their surroundings using a phone in the way they navigate their desktops with a mouse.

Once the augmented view has been set up, AR browsers can serve the user simple location-based ads or create virtual experiences that double as commercials.

This sentiment appears to be shared by several large corporations - Lego, Mini Cooper and Red Bull to name a few - that want their brands to be associated with visionary thinking and experimental advertising.

As more of these companies add AR to their marketing strategies, some interactive agencies are anticipating big business - to the point where some have engaged lawyers to help them in future battles over virtual ad space.

The media buildup around this technology has been helping developers, even those whose core product had little to do with AR, find corporate sponsors and advertisers willing to fund their mobile apps.

"Just like we did with the hype around the iPhone, we capitalized on the hype over AR," said Alexander Trieb, co-founder of Tripwolf, a Vienna-based social travel-guide.

"We can't monetize AR as a standalone application, but it definitely adds to the value we provide the user and the advertiser."

Every time someone books a hotel using the Wikitude browser, the company collects a small commission - a model similar to a website collecting money when users click on an online ad.

Metaio, the Munich-based AR company behind the Black Eyed Peas app, is one of the key players producing AR advertising.

Like its European competitors - Total Immersion, Layar, or Wikitude - the firm was created with an industrial focus but has now shifted much of its attention to consumer projects. 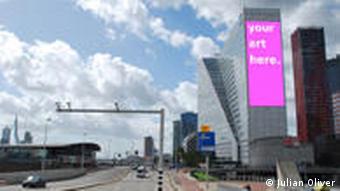 In the last year, Metaio has created a number of AR ads in Germany alone.

For Coke Zero, for instance, it made a print ad that animates when viewed with through an AR browser. Similarly, it created a special AR edition to the Sueddeutsche Zeitung and a Frauennotruf Muenchen ad against domestic violence.

These campaigns did generate some PR, but the novelty of watching a two-dimensional image jump to life could quickly wear thin. So what exactly is the benefit of future AR ads?

Using the example of the Black Eyed Peas app, Jan Schlink of Metaio imagined the next stage.

"We could have a hyperlink on that poster to download sound samples or hidden bonus tracks," he said, "So you stand in front of a poster and can directly download the sound just by triggering it through the image."

"They show users what is possible with the technology," said Martin Herdina, the chief executive of Mobizily, the company behind Wikitude.

But for now, the number of users who can reach these AR experiences is still limited, he added.

"My goal for 2011," Herdina said, "is to turn augmented reality from a some fancy future lab project into a Google Maps - the de facto mobile navigation system and a service that makes everybody's life easier on a day-to-day basis."

The improved processing power of smartphones and the faster mobile Internet speeds have already been making augmented reality accessible to more people.

Industry analysts say these numbers will only increase - Forrester predicts that mobile Internet adoption will grow at a healthy clip, with audiences tripling from 13 percent of Western European mobile users in 2008 to 39 percent in 2014.

But becoming the next Google Maps is still a long way off.

First, the different AR companies would need to agree on standard data formats and interoperability. 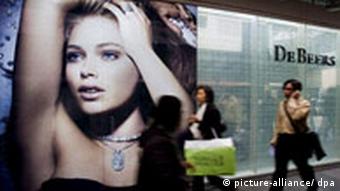 Are the days of good old poster ads numbered?

Right now, different AR browsers - like Wikitude, Junaio and Layar - all operate on different, incompatible platforms. So to view a single application or ad campaign, users need to download the specific browser for which it was developed - a multi-step process that could be a bit off-putting.

The AR business is at such a nascent stage that every major company is arguing that its own model should be become the standard.

Wikitude, for instance, is pushing for the industry to adopt its Augmented Reality Markup Language (ARML).

Herdina is hoping the competing AR browsers will reach an agreement in February at the Mobile World Congress in Barcelona, but he said the battle is far from over.

Technical problems aside, the second major obstacle also may be AR's devling into uncharted legal territory when it comes to copyright protection, and privacy, according to John Nicholson, an American attorney at Pillsbury Law in Washington, D.C., a legal practice dedicated to virtual worlds and social media.

"Adding location-based data just adds just one more layer of personal identification and makes it even easier to build a profile that says: this person is most likely a 38-43 year-old male, with this buying profile, with these interests, and he's right here," he said. "It's the right here part that starts to make people a little more nervous."

However, he speculated that perhaps developers could build some of these blockages into the system before AR spreads too widely.

"In an ideal world," Nicholson said, "A developer would design privacy into the system, so if the application recognized that you're in a potentially sensitive area, like a hospital, it would automatically turn off its own location tracking."

Despite these incomplete foundations, AR firms are going ahead with their lofty plans for the future, what many have called "augmented vision," where every inch becomes potential advertising space - billboards could float about like balloons or brand mascots could bounce out of buildings with coupons and special offers in hand.

In fact, according to Jan Schlink of Metaio, his company has already begun working on a pilot city for augmented vision.

"[It would be] where you track the real natural features around you: you stand in front of a building, point your phone onto it and the software really recognizes the building as it is - there is no marker, no poster, nothing," he said.

A number of websites have launched in Europe aimed at raising funds for various projects in Germany and beyond. As American crowdfunders raise big dollars, European donation sites are now eager to catch up. (13.01.2011)

Berlin music social media site SoundCloud has put in place a content ID system to address piracy concerns. Some of the growing community of users have responded angrily to the measures. (14.01.2011)