The former Nigerian vice president has hinted at plans to further privatize corrupt state institutions; however, he continues to deny his own corruption allegations in the lead-up to Saturday's general election. 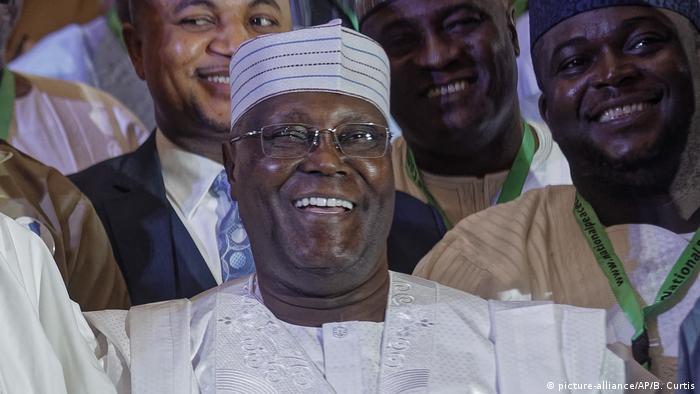 Former Nigerian vice president Atiku Abubakar is set to make a bid for the top job for the fifth time this Saturday in the Nigerian presidential election. Like the incumbent President Muhammadu Buhari, Abubakar is from the north of the country and is Muslim. He has long been a household name in Nigeria thanks to his heavy involvement in politics and the business world; however, ongoing corruption allegations have threatened to overshadow his campaign. DW spoke with Abubakar following a rally in his home state of Adamwa about the problem of corruption in Nigeria and his plans for the country should he secure the presidency.

DW: Why are you optimistic that the majority of Nigerians will vote for you this time around?

Atiku Abubakar: I was able to secure the ticket of the party in a very convincing manner. This is our last state as far as election campaigning is concerned so we have been able to assess the acceptability and candidature of the party. So that makes one very hopeful.

There have been a lot of corruption allegations against you but you have never been convicted by any court. But when you talk to Nigerians, many would say that don't fully believe that you were never involved in any form of corruption. Why do you think this perception exists?

The perception is there because my opponents have always latched on to that. Any accusation that keeps on being repeated all the time is bound to receive attention.

You said you would consider granting amnesty to looters if they returned stolen state funds. Many people think that this is a sign of impunity in the future. Do you still think this is a good idea?

Whatever amnesty is granted will be based on the rules of the country. Because we have provisions for that in our laws. It's something we could consider, but we haven't said we are definitely going to do it. Because the ongoing fight against corruption has not given us the results that we expected or that we want. We are not securing as many convictions that are possible and we are not securing the return of our wealth. Other than the time when I was vice president and I was the chairman of the recovery panel where we recovered more than $4 billion (€3.55 billion), I don't think any government who tried to fight against corruption was able to do it. So I was only saying, why can't we look at corruption from a number of perspectives. First of all, prevention is better than cure. Secondly, we should also consider some of the provisions in our law that allows the return of stolen funds or property. And then also some level of punishment.

You mentioned your time as vice president. Back then you also oversaw the privatization of government entities. Now you're saying you're looking into privatizing the Nigerian National Petroleum Corporation (NNPC). Your opponents argue that this could give people another opportunity to get rich quick, which is something the country has seen before. What do you make of this?

First of all, I have the firm belief that one of the most corrupt institutions in Nigeria is the NNPC. We have been exporting crude oil for the past 63 years and yet we cannot even refine it. If you hand over all of these things to the private sector, of course we will be even richer and we will have more development.

Do you have a concrete plan of how to go about this privatization?

No, I don't have a concrete plan. But you should also consider what they did in the UK, where they allowed all citizens and corporations to participate in the privatization.

The security situation has been deteriorating in parts of Nigeria in recent weeks, including in the northeast. What is your assessment of the leadership of the security forces? Have they been doing a good job or will you look into it further if you become president?

There are a number of allegations against the military commanders concerning corruption. And secondly there is a lack of training and a lack of equipment and also a lack of necessary working conditions for them to sacrifice their lives to protect the people of this country. So we have to look at all these solutions in a holistic manner and provide solutions to them.

Atiku Abubakar is a Nigerian politician, businessman and former vice president. He is running for president in the 2019 general election under the People's Democratic Party (PDP) ticket.

This interview was conducted by Adrian Kriesch.

Obasanjo: 'Disputed elections are better than no elections'

In an exclusive interview ahead of Nigeria’s elections, former president Olusegun Obasanjo talked to DW about why he feels there are reasons to celebrate democracy in Africa, even if a lot remains to be done. (22.01.2019)