Athens Muslim group attacked in wake of violent protests | Europe | News and current affairs from around the continent | DW | 23.05.2009

At least three people were hospitalized in Athens on Saturday morning after a firebomb attack on a shop used as a Muslim prayer center for immigrants. 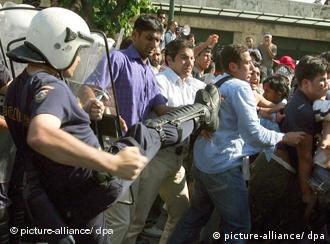 Police said unknown assailants smashed the shop's windows and poured gasoline inside before igniting it.

The attack came a day after clashes between more than 1,000 Muslim protesters and Greek police in central Athens, after the police allegedly desecrated a copy of the Koran.

The march was organized by leftist, immigrant and anti-racism groups. Violence broke out after the rally when a group of protesters began throwing projectiles at police.

Immigrant groups allege that an Athens police officer tore apart and stepped on the Koran of a coffee shop customer during a police check in central Athens on Thursday. Police said they have launched an investigation into the incident

Some 46 protesters were arrested Friday during the clashes, while seven Muslim immigrants and seven policemen were hospitalized for treatment. More than 70 cars and around a dozen businesses were damaged in the clashes, which sent tourists running for cover in nearby hotels.

A day earlier an even larger crowd of around 1,500 Muslim immigrants rallied before the march degenerated into violence. Police used tear gas to disperse the crowds.

Many Muslims in Athens use abandoned factories and converted coffee shops as makeshift prayer houses. Some Muslim groups have complained of police brutality and poor treatment by officials in the past.

Athens is the only European capital which does not have a proper mosque or cemetery to serve its Muslim population. There are more than 300,000 Muslims living in Athens, mainly from various parts of northern Africa and Pakistan.

At present, the only operating mosques in Greece are in the north-eastern region of Thrace, home to some 100,000 Muslims.

Authorities in New Delhi are being criticized for a heavy-handed response to violent protests by Indian Muslims after senior government officials made remarks allegedly insulting the Islamic prophet Muhammad.