At least 60 people have been crushed to death in a stampede that broke out following a fireworks display at an Ivory Coast stadium. At least two hundred were injured. 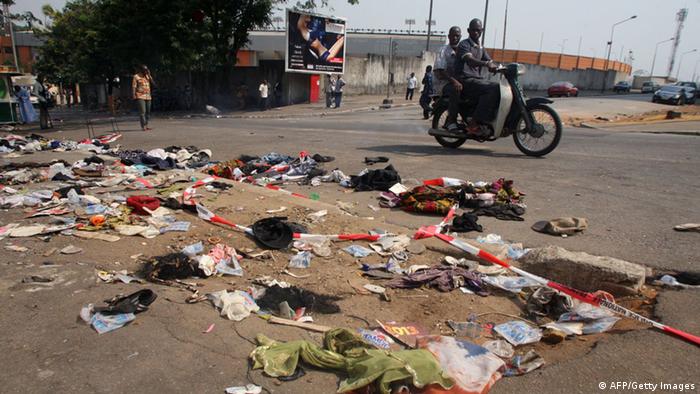 A celebration in Abidjan, the Ivory Coast's largest city, turned deadly shortly after midnight, when panic swept through a crowd of people who had gathered at a local stadium for a New Year's Eve fireworks show.

The head of military rescue workers, Lieutenant Colonel Issa Sako, told journalists at the scene that 61 people had died, adding that "49 were evacuated" by rescue workers. Other injured people went to the hospital on their own.

Another rescue official said earlier that 200 had been injured. Many of the victims were under the age of 15.

The flow of people in the stadium caused "a very large crush," Sako said. "In the crush, people were walked over and suffocated by the crowd."

A stampede broke out after fireworks at the stadium had ended, witnesses said, but the cause remains unclear.

President Alassane Ouattra, visiting injured people in the hospital, called the incident a national tragedy and said an investigation was underway to determine what happened.

The stampede is the worst of its kind in Abidjan since a 2010 stampede inside a stadium during a football match that killed 18 people.

The fireworks show, Abidjan's second in as many years, had been promoted as a symbol of national renewal under Ouattra after the post-election violence that killed some 3,000 people between December 2010 and April 2011.