Just one day before the launch of Expo Milano 2015 about 20 percent of the expo isn’t finished. You can fight prejudice all you like, but all you hear on the ground is, "What did you expect? This is Italy!" 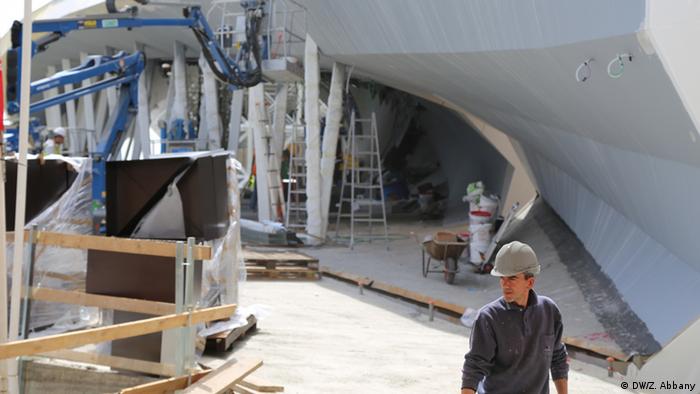 So let's get one thing straight: Expo Milano 2015 will not be ready on time. Basta.

With more than 50 countries presenting at "self-built" pavilions dotted around the totally redeveloped grounds at RHO Fiera, and many more presenting in "clusters," word is that only 80 percent of the expo will be ready for opening day on Friday (1.05.2015).

The German pavilion has been proud to proclaim that it's ready and waiting. It's been checked and cleared, and the only thing that's left is for the design team to have the signage "GERMANY" painted red, or left white. 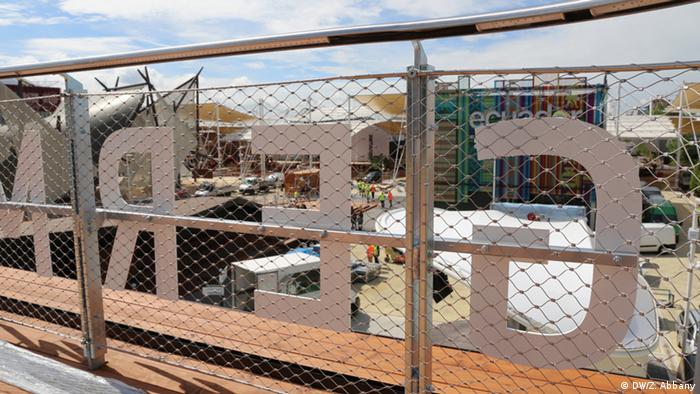 Next door, the Kuwaiti pavilion is all set, as is the American pavilion. The UK and Austrian pavilions - which demand special mention because of their ingenious approaches to the expo theme of "Feeding the Planet, Energy for Life" and their use of technology - are likewise done.

But others, such as the Chilean pavilion, and Iran's - a much anticipated unfurling rug, apparently - and Nepal's are incomplete. The Nepali workers left for home after the earthquake on April 25 to attend to more important things. The Russian pavilion in particular is some way off from completion, with "some way off" being an understatement.

It's not unusual for world expos to push construction to the wire - the German pavilion architect, Lennart Wiechell of SCHMIDHUBER, says it was a similar situation in Shanghai 2010. But not this bad.

And there, says Lennart, construction workers often didn't even know what they were doing. But they got it done.

So people here in Milan keep asking, "why?" 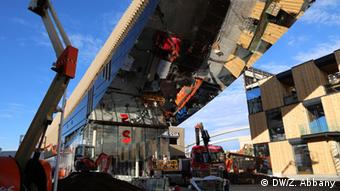 Cranes are still a common site at the Expo Milano

And the one answer you hear is, "What did you expect? This is Italy." Or words to that effect. Lack of organization, corruption…and a round of knowing, yet bewildered, smiles and a shrugging of shoulders.

Plus it's no consolation that even the Italian pavilion - the site of the grand opening, perhaps - was still being visited by cranes on Wednesday.

At some point over the next six months construction work will stop. And an expected 15-20 million "users" will be bombarded with more thought-provoking installations, interactive technology, food and culture than they could ever hope to absorb in a day.

They will also be bombarded with an immense contradiction.

The master plan for the expo site is based on an old Roman concept. The site forms an axis of two street crossings. The "Decumano" runs from east to west and is the main drag, stretching one-and-a-half kilometers. The "Cardo" runs from north to south, where you will find the Italian pavilion.

It was said early on that the Decumano would only feature country pavilions and clusters - that is, the main attractions of the expo. All commercial sponsors would be relegated to a second row.

This idea was maintained for the New Holland Agriculture pavilion and the impressive Vanke Pavilion, which Daniel Liebeskind designed for Vanke, a Chinese real estate firm. 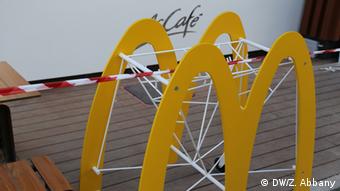 McDonalds is one of the presenters at the Expo Milano.

But McDonalds, an American fast food chain, and Lindt, a Swiss chocolate producer, managed - somehow - to get front row status. Ask around, and all you get is a muted-shrug and that international hand-gesture (no, not that one) that signified the exchange of money.

It lends weight to criticism raised by Jacques Herzog of the Switzerland-based architects Herzog & De Meuron. Herzog was involved in the master plan, but has since voiced his dissatisfaction with the results, because he feels the expo will be just another "vanity" fair.

If Expo Milano 2015 takes it's theme of Feeding the Planet seriously, how can it justify having given prime locations to food vendors whose products, it has been said, fail to fall within any normal definition of healthy. 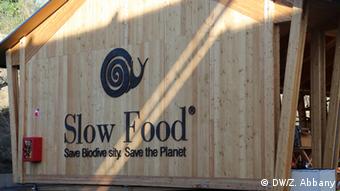 Slow Food's pavilion is a bit off the beaten path.

Herzog's Slow Food Pavilion, meanwhile, stands some hundred meters away at a far end of the Decumano. Along with the Austrian and UK pavilions, it promises to be one of few areas of tranquility and beauty amongst all the nagging technology and jumbo video screens on display.

But judging from the missing "R" in biodiversity on the side of the shed, it may have already lost its teeth.

Battle of the boxes

What is amazing is that while all the pavilions aim to address the same subject matter there is so much diversity in design. 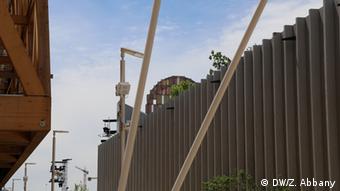 Some architecture represents a "battle of the boxes"

Wiechell laughs as he points out the Chilean and Austrian pavilions - a clear example of the "battle of the boxes."

His German pavilion is a fluid design. "Solar trees" are rooted in the base of the exposition and reach out through the top of the structure to touch the sky, as trees do. They will also provide shelter from what could become a blazing Italian summer. Check them out for their ground-breaking technology alone. 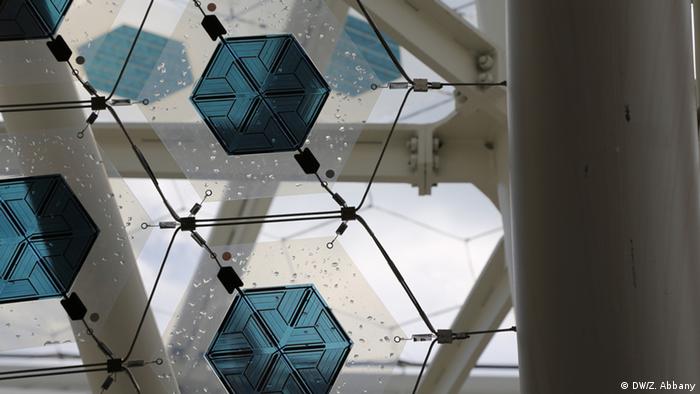 But the highlights remain the Austrian and UK pavilions.

Both have chosen to take one small element of the issue of feeding the planet and energy for life to illustrate their countries' talents for innovation, while at the same time keeping nature and sustainability at the core. 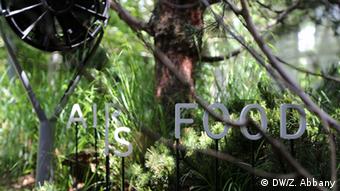 Austria's forest pavilion is a bit of peace, quiet and shade at the Expo Milano

The Austrian forest offers little in the way of visible technology, but offers plenty of space for contemplation. And you will need that if you plan to visit the expo. 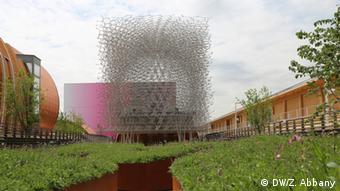 The UK pavilion will amaze you with its maze-like meadow and metal hive. It's a sound, light, and natural installation that asks you to think about the plight of bees, and how it's vital we preserve them if we're to preserve ourselves. And if you're a sound nut like me, you'll love the fact that the sounds you hear are triggered by the movements of a live hive in Nottingham.

All this begs the question of whether it's a truly sustainable plan to dismantle the pavilions here within three months of the expo closing. Given that many pavilions won't even be complete on the day the expo opens, it's seriously questionable indeed. 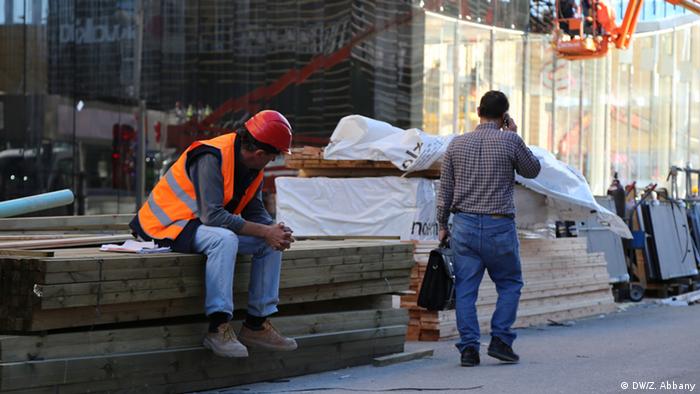 After years of preparation, the Expo Milano 2015 opens on May 1. DW’s Zulfikar Abbany is in Milan, tracking the final days before the big day. Check here for the mood, the scene, and opinion. (24.04.2015)