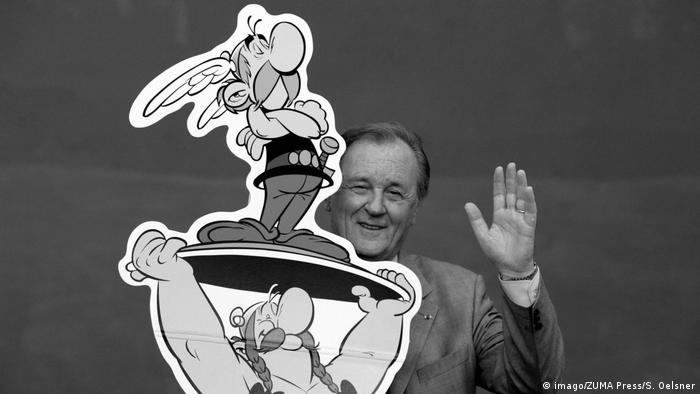 "Albert Uderzo died in his sleep at his home in Neuilly (-sur-Seine, France) after suffering a cardiac arrest unrelated to the coronavirus. He was very tired for many weeks," his son-in-law told AFP.

Uderzo and author René Goscinny are known as the "fathers" of the beloved French comic series about a village of Gauls who stand up to Roman occupiers.

Since 1959, the "Asterix" comic books have sold over 370 million copies and been published in over 100 languages.

A lifetime of adventures

Uderzo was born in 1927 in a city near Reims in northeastern France. The son of Italian immigrants, he already enjoyed painting as a teenager, but went on to do an apprenticeship in carpentry.

After World War II, he began his career illustrating comics. He met and teamed up with Goscinny in 1952. The pair worked on other projects together before striking gold with the stories of the little village of Gauls. The comics tell of the adventures of the title character Asterix and his friend Obelix.

After Goscinny died in 1977, Uderzo continued working on the series alone, taking over the writing as well, before gradually retiring at the age of 84. He chose author Jean-Vyes Ferri and illustrator Didier Conrad to carry on the series. The duo, who took over in 2013, still write and illustrate new editions of the comic to this day.