Asma Jahangir: Taseer′s murder will embolden the Pakistani religious right | Asia | An in-depth look at news from across the continent | DW | 05.01.2011

Pakistan's leading human rights activist Asma Jahangir tells DW that after the assassination of the governor of the Punjab, it will become more difficult for people to challenge the country's controversial blasphemy law. 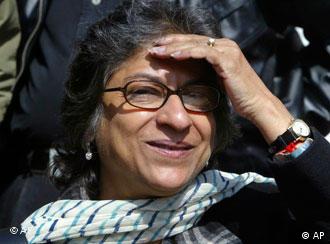 Asma Jahangir is the president of Pakistan's Supreme Court Bar Association and one of the country's leading human rights activists. She was the chairperson of the Human Rights Commission of Pakistan, a non-governmental rights-based organization, and has also worked with the United Nations as Special Rapporteur on Freedom of Religion or Belief.

Deutsche Welle: The Governor of the Punjab Salman Taseer was apparently murdered for opposing Pakistan's controversial blasphemy law. How difficult will it be now for others who are campaigning against the law?

Asma Jahangir: Obviously it has posed difficulties, because people's lives will be at risk more and more. Not only that Salman Taseer was murdered, on top of it there are people coming on television and justifying his murder. Even the interior minister said that if somebody blasphemed in front of him, he would shoot him himself. Salman Taseer actually had not said anything which was in any way blasphemous. He had only said that the law needs to be looked at. So yes, I think it will become difficult for people to campaign against the law. But I also see that there is a lot of resilience in the Pakistani society because a lot of people have come on television, and a lot of people are saying that this is not the way to go.

Will Salman Taseer's murder polarize the Pakistani society further? Will it increase the divide between right-wing and liberal Pakistanis?

Some of us are of the opinion that we have to now begin to negotiate with them (the religious right), and have a dialogue with them rather than just talk at each other. I don't know what the outcome will be because the ball is in the court of political forces of the country. The have to take the initiative. Civil society has been doing it for many years.

Hundreds of educated young Pakistanis have welcomed Taseer's killing on social networking websites, such as Facebook and Twitter. What does this celebration of violence mean for the future of Pakistan?

Well, it just means that we are on the way to fascism. But we must not ignore the fact that Facebook and Twitter are also manipulated by a very well-knit group of militants, who are also backed by elements within the state.

Do you mean to say that it does not reflect a mainstream trend?

I do not think that it shows the mainstream trend, but there are people who will welcome a murder like this.

Most leaders of Pakistan's religious parties have not condemned the murder. On the contrary, some religious leaders have warned that anyone expressing grief for Taseer could also meet the same fate. How serious are these threats?

Today at Taseer's funeral there were thousands of people, and they were surely there because they were grieving. The right wing is always threatening us. Every single day we get threats from them. If they could, they would kill all of us.

What should the Pakistani government do now? Will it not be synonymous with surrendering to the religious extremists if the government doesn't do anything to amend the blasphemy law?

To my mind, Taseer's murder was as political as it was religious. The fact that they have killed a governor from the Pakistan People's Party also shows that they want to destabilize the government and derail the democratic process. So they are succeeding in that way. The government is walking a tightrope. They have to do something about it, but they have to have the leadership to take other people along with them.

Will it not embolden the religious right in Pakistan if the government does not do anything about the blasphemy law?

They are already emboldened. They have been emboldened for months. This has further emboldened them, and I believe it will continue if the government and other political parties do not come out and say enough is enough. Somewhere this has to stop. There will be further bloodshed. People will be scared, may be they won't say anything, but every time there is somebody who is going to be arrested because the law has been misused, people will also get angry.

The influential governor of Pakistan's biggest province, the Punjab, has been assassinated by one of his own security guards - probably because he was opposed to Pakistan's controversial blasphemy law. (04.01.2011)

Pakistani lawyer and human rights activist Asma Jahangir is the recipient of this year's UNESCO/Bilbao Prize for the Promotion of a Culture of Human Rights. (10.12.2010)

Pakistan is the most dangerous country for journalists

The media watchdog Reporters Without Borders has said that 11 journalists have been killed in Pakistan in 2010, making it the deadliest country for journalists this year. (30.12.2010)