Qatar continued their unlikely run to the Asian Cup final with a 4-0 thrashing of the United Arab Emirates. Qatar have now scored 16 goals and conceded none in the tournament, and will face Japan in Friday's final. 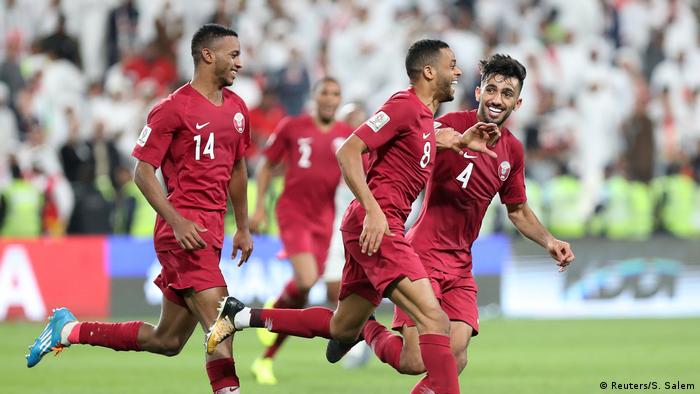 Qatar will meet Japan in the Asian Cup final after a 4-0 thrashing of hosts United Arab Emirates in a semi-final which was explosive only in the stands.

A goalkeeping error allowed Boualem Khoukhi to open the scoring in the 22nd minute and Almoez Ali's fine strike effectively sealed victory for 2022 World Cup hosts Qatar before the break.

Tournament top scorer Ali had several shoes thrown at him in celebrating his eighth goal overall as UAE fans in Abu Dhabi struggled to accept their team being exposed by a rival.

And when Qatar captain Hasan Al Haydos made it three 10 minutes from time, another torrent of objects flew towards the jubilant players.

The UAE's misery was completed with the late dismissal of Ismail Ahmed for elbowing Salem Al Hajri off the ball, and Hamid Khaleefa's fourth with virtually the last kick.

Friday's final pairs Qatar, who had never previously been beyond the last eight, against record four-time champions Japan in the Zayed Sports City Stadium. Japan beat Iran 3-0 in their semi-final on Monday.