Hosts United Arab Emirates looked to be falling to a shock opening day defeat to Bahrain until they won a controversial 88th minute penalty. Substitute Ahmed Khalil scored from the spot to rescue a point for his side. 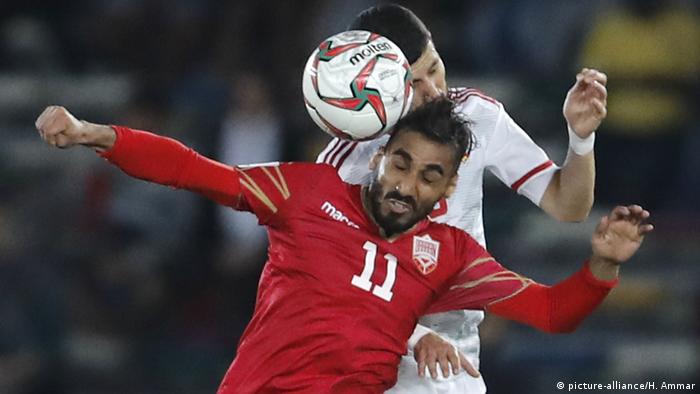 A dubious handball decision allowed hosts United Arab Emirates to steal a late point against underdogs Bahrain as the 2019 Asian Cup got underway on Saturday.

After an opening ceremony featuring about 600 performers had been and gone the sides traded early chances, with UAE's Ismail Al Hammadi wasting the best of them, allowing the Bahraini keeper to palm away his chip after being sent clean through.

The home side struggled to truly impose themselves on the match in front of a patchy crowd of just 33,000 at the Zayed Sports City Stadium in Abu Dhabi, and the teams could muster just one shot on target between them in the opening 45 minutes. Ali Mabkhout, winner of the golden boot four years ago in Australia, was particularly wasteful.

A stalemate looked assured until Mohamed Al Romaihi bundled home a 78th-minute opener for Bahrain
after his initial effort had been cleared off the line to leave the UAE on the brink of a shock Group A defeat.

The UAE have struggled to score under Italian coach Alberto Zaccheroni and creative midfielder Omar Abdulrahman, out with a cruciate ligament injury, was sorely missed.

But Khalil, who had been brought on shortly earlier to win his 100th cap, leveled from the spot with just two minutes remaining after the referee adjudged that a dropping ball had hit a Bahraini hand.

Thailand and India, the other sides in the group, meet on Sunday.

Asian Cup: Expectations high for Iran but not all is rosy

Six months after a strong performance from Iran's national team at the World Cup, expectations for 'Team Melli' are high. At the upcoming Asian Cup, fans are hoping for a first title in 42 years. (05.01.2019)

Despite war devastating the country for almost eight years, the Syrian national football team has qualified for the 2019 Asian Cup. Many Syrians are enthusiastic, others have politically justified reservations. (04.01.2019)

With the 2019 Asian Cup kicking off on Saturday, DW takes a look at each group and predicts which teams will make the knockouts. Traditional regional powers and emerging teams face differing levels of expectation. (04.01.2019)