Libyan protesters have stormed the headquarters of a Muslim Brotherhood-affiliated political party and another Islamist-allied party. Amid the chaos, 1,000 detainees escaped from a Benghazi jail. 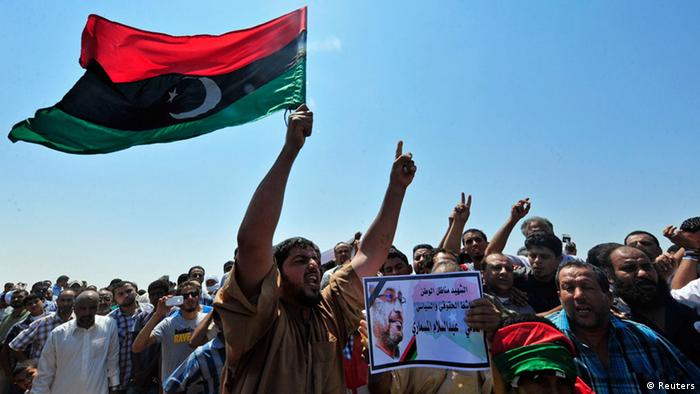 Saturday's clashes in Libya came after the assassination of a prominent critic of the Brotherhood. Hundreds took to the streets overnight to protest the Friday killing of prominent political activist Abdul-Salam Al-Musmari, who was killed as he left a mosque.

Musmari was an outspoken opponent of the Muslim Brotherhood, whose political wing is currently the second biggest party in Libya's General National Congress.

"We don't want the Brotherhood, we want the army and the police," some protesters chanted, echoing a slogan used in Egypt.

Libya's militias are fighting attempts to curb their influence even as the security situation in the country deteriorates. But doubts remain over whether official security forces have the power to replace them. (13.06.2013)

On Saturday, protesters in Libyan cities stormed Islamist-affiliated party offices. In Benghazi, they invaded and set fire to a building the Muslim Brotherhood's political wing occupies.

During the chaos, a jailbreak was launched at Benghazi's Koyfiya prison, government security official Mohammed Hejazi said. It was unclear whether the jailbreak was part of the protests or if the inmates received help from outside.

A security official from the prison said most of the inmates being held were convicted on serious charges.

In Tripoli, meanwhile, a crowd stormed the Brotherhood political wing office before heading over to the headquarters of the liberal National Forces Alliance and ransacking it. Protesters in Tripoli also set fire to tires in the street and demanded the dissolution of Islamist parties.

Protesters seemed to be inspired by events in neighboring Egypt, where millions took to the streets Friday to answer a call from the army chief, who said he wanted a mandate to stop "potential terrorism" by supporters of the country's ousted president and Brotherhood-aligned Mohammed Morsi.

Human Rights Watch urged the Libyan government on Saturday to "conduct a prompt and thorough investigation" into al-Musmari's death, urging the nation to continue building a democracy.