Two million people signed up on Facebook to go alien hunting at the highly classified US air force facility Area 51. Are they crazy or is there something to it? What would happen if we came into contact with aliens? 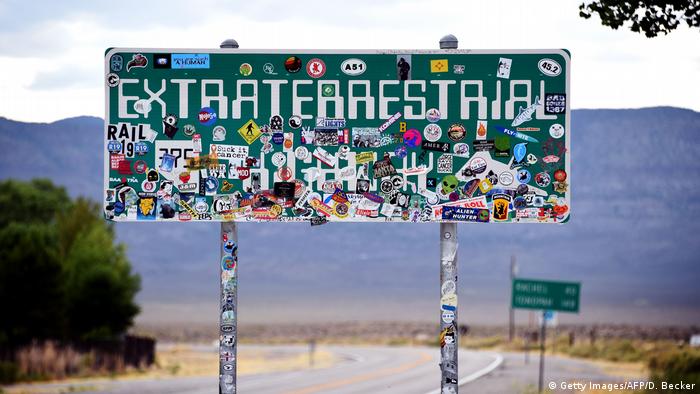 For some it's a joke, for others it's as serious as it gets: 1.9 million people have announced on Facebook that they will storm the US military compound Area 51 in Nevada on September 20, 2019.

Many are absolutely convinced that the US government is hiding UFOs or aliens there.

It was not until 2013 that the American secret service officially confirmed the existence of the military zone Area 51. Local residents and visitors had reported seeing mysterious flying objects at the site and speculated they were UFOs. The US military has been working on new spy planes on the site for decades, which could have been the reason for the mysterious sightings.

Read more: CIA confirms existence of top-secret Area 51 - but no UFOs in sight

Tucked in the remote, dry Amargosa valley, the military zone has become an object of popculture, often linked to aliens in films and television series. Hotels and restaurants in the area have taken on the 'alien' theme.

What science says about aliens

While the internet is awash with Area 51 alien hunting memes and conspiracy enthusiasts are preparing for the trip to Nevada, several scientists around the world are actually researching the possibility of extraterrestrial life. And they aren't ruling it out.

"I would find it surprising if extraterrestrial life didn't exist,"astrobiologist Dirk Schulze-Makuch from the Technical University of Berlin told DW.

"With the trillions or more planets and moons, it would be strange if we were the only place where life would occur."

Could we find extraterrestial life?

How do we find out if there's life out there?

Schulze-Makuch looks for life in its simplest form, meaning microbes. First, he tries to define conditions for life to exist. There must be an atmosphere or an ice shield, he says, to protect life on a planet.

Relatively stable air pressure, not too much radiation and favorable temperatures are needed as well. But microbes can survive even under harsh conditions, such as in the Atacama Desert in Chile or in hot springs at more than 100 degrees.

If there are no liquids, there can be no life. But the liquid does not necessarily have to be water, says Schulze-Makuch, it could also be ammonia or methanol. A common mistake is to extrapolate too much from the conditions that make our life on earth possible, he says. Ammonia and methanol may be toxic for humans, but for other living beings, they could be the source of life.

The search for a second Earth

While Schulze-Makuch's research looks for livable conditions on the planets within our solar system, there are also scientists searching for earth-like planets farther away in our galaxy, Milky Way. Nearly 4000 other planets have already been discovered. About 50 of them have a suitable mass and a favorable distance to the sun they orbit around. A certain distance is needed to enable temperatures suitable for life.

A candidate for livable conditions getting a lot of attention right now is a planet called "Proxima Centauri b". But that's only because it's comparably close, says Schulze-Makuch. Close in this case means 4.3 light years away. If it is possible to fly at 10% of the speed of light one day, it would still take 43 years to get there. 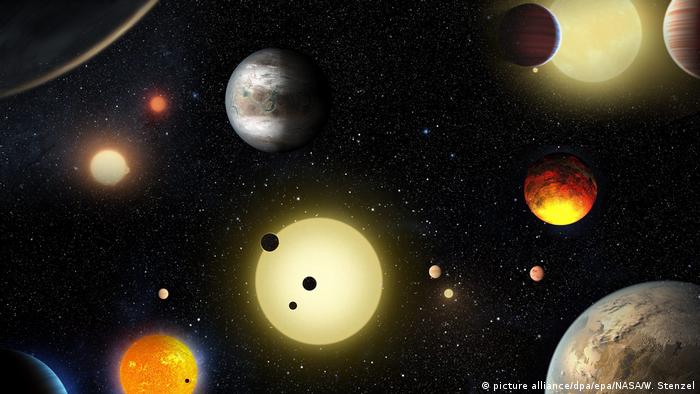 "Proxima B" in the galaxy Proxima Centauri is 4.3 light years away, or 43 years.

Hello? Is there anyone out there?

If we can't get to other planets and have a look ourselves, we have to find the aliens by other means. If other developed civilisations exist, they should also be able to emit radio waves, the researchers of the SETI Institute in California assumed. With giant telescopes they try to register possible radio waves from space.

"The most complex part is to filter out all the Earth's interfering radio waves",Andrew Siemion, leader of the project, told DW.

Scientifically, no one has proven that extraterrestrial life exists. Statistically, however, it's probable, says Siemion. If it was possible for life to form here on earth, then why not somewhere else?

This is what sociologist Andreas Anton from the Freiburg Institute for Frontier Areas of Psychology and Mental Health in Germany is working on.

Anton describes three possible scenarios. In thefirst, "signal" scenario, Andrew Siemion and his colleagues from the SETI project mentioned above would receive an alien radio signal. If it originated from less than 30 light years away, a young scientist could send a message and receive an answer within their life, assuming they could decode the message.

But the question is also whether it would be a message to us or whether we just picked up something that was not meant for us. And would it be dangerous for us to reply? That's what Stephen Hawking said, warning of contact with an advanced civilisation.

The second scenario is the "artifact" scenario. This means we would find an object in our solar system that was made by other beings. Then we would have to decide who should investigate it, how and where. Should we bring it to Earth or could it be dangerous? Who could examine it, possibly profiting from copying new technologies?

The most extreme scenario is the third, "direct" scenario, when a spacecraft lands on Earth. Even if it is unoccupied, this would likely cause immense uncertainty and perhaps even mass panic and political chaos. It would mean that there is a civilization that is far more advanced than we are, says Anton.

"That's why it is important to systematically think about how we should behave in these scenarios," Anton says. For example, how could we prevent mass panic and political chaos and who would represent us by communicating with the aliens?"

The direct scenario is extremely unlikely, but if it were to happen it would have very far-reaching consequences. That's why Anton would like to see a global committee of experts drawing up an emergency plan — just in case.

One of the oldest mysteries of humankind

For Siemion and Schulze-Makuch, the question of extraterrestrial life is one of humankind's greatest puzzles.

Anton points out that long ago the ancient Greeks pondered the question of whether we are alone on our planet. During the Renaissance the question came up again, and shortly afterwards the first precursors of science fiction novels appeared. Even Johannes Kepler, the German astronomer, wrote a story about possible moon inhabitants back in the 16th century. Later, science fiction novels and films even inspired scientific research, says Anton.

Anton, Siemion and Schulze-Makuch all agree on one point. The human fascination with extraterrestrials — clearly ongoing as the hype around Area 51 demonstrates — is based on a central, forever-intriguing question: Are we alone in the universe and, if not, are there others out there just like us?

'Alien': Sci-fi that gives you the creeps

Ridley Scott's "Alien," which burst into cinemas in 1979, haunted an entire generation of moviegoers and spawned one of the most successful sci-fi franchises of all time. "Alien: Covenant" is the latest to hit theaters. (10.05.2017)

The Mars Science Lab touched down on August 6th, 2012 on the red planet. It then released the largest rover ever built. Cusiosity has all kinds of instruments, and its ongoing deployment is a success story. (06.08.2017)