490 years after Martin Luther nailed his Ninety-Five Theses to a door in Wittenberg, the city is the staging post for a revival aimed at reversing the fortunes of the nation's ailing Protestant church. 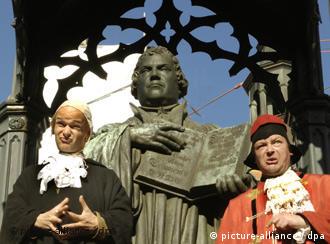 Last summer, German Protestants were catapulted into an identity crisis when the Evangelical Church (EKD) called for a "shift in thinking."

So the alarm bells were ringing when some 300 church representatives and politicians came together for a congress in Wittenberg to discuss ways of braking this accelerating trend. According to the organizers from the EKD, the solution is a slate of reforms designed to usher in a "decade of change" set to culminate on the 500th anniversary of Luther's Theses in 2017. 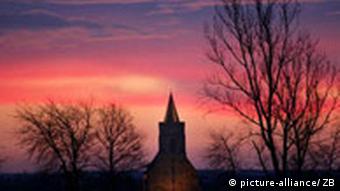 The proposals included cutting back the country's Regional Churches from 23 to a maximum of 12, with the squeeze primarily on traditional, smaller parishes. In future, the EKD wants to see the congregations of the individual Regional Churches number at least 1 million -- twice the size of many of the smallest existing communities.

But these aren't the main challenges. The Church's strapped finances are problematic enough, but the congress participants were well aware that far more is at stake than a leaking roof or two. Ultimately, the Church knows it needs to reappraise its role and find a new place for faith within contemporary society.

"It's time for a new departure," parliamentary deputy speaker Katrin Göring-Eckardt of the Green party told the congress. "And not primarily because of declining membership and lack of funds."

Göring-Eckardt dismissed complaints that the EKD treated the Church like a business in need of a turn-around by bandying around terms like 'quality control' and 'quotas,' and stressed the Church's need to adapt to the times. "We need a worldly church, not an other-worldly church," she said.

The business of religion 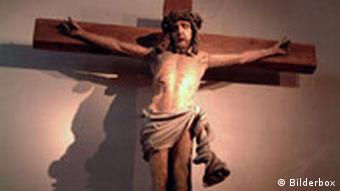 What relevance does Christ have in today's world?

Many agree that a bit of business acumen is exactly what the Church needs. The days when even handing around a collection plate was an embarrassing concession to earthly matters are long over, and Thies Gundlach from the EKD says the Church has to become less coy about resorting to best-practice marketing tricks.

"The church would be betraying itself if it behaved like a business," he said. "But in the Bible, Paul says: 'Test everything, retain what is good,' which is a principle that does allow us to learn a few lessons from business and economics -- from customer loyalty to promoting the Protestant brand -- so long as we never forget that the church will never be a company like any other."

His feelings are shared by Swen Schönheit, pastor at the Apostle Petrus Church in Berlin. An angular building built in the 1960s, it couldn't seem less inviting from the outside, but what it lacks in aesthetics it more than makes up for in atmosphere, defying the national trend by regularly welcoming a full house on Sundays.

"What many churches in Germany lack is charisma," he says. "The church has suffered a loss of spiritual energy, it lacks relevance. Its crisis is a spiritual one not a financial one."

And it's no one's fault but its own, he says. "Society is seeing a boom in religious interest, there's a renewal of spiritual soul-searching going on in Germany, but this is completely passing by the church, and it's time the church found a way of harnessing it."

"It has to realize it is in competition with other sources of spirituality within society and get its act together," he insists. 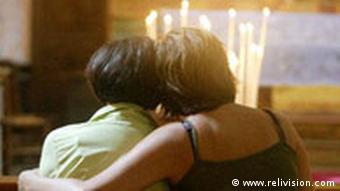 Many feel the church needs more of a human touch

His own church obviously has. Community activities range from children's dance classes to group summer holidays, while the Sunday service kicks off with a house band switching on the electric amplifier as the congregation sings along with the help of a power point show.

But to some, this form of happy-clappy religion is suspiciously reminiscent of the born-again evangelism popular in the US -- one which goes hand-in-hand with a Christian-Right political agenda deeply foreign to secular European sensibilities.

But it's unlikely German Protestants will ever head in this direction. "Traditionally, religious affiliation has been a private matter in Germany due to the separation of church and state," explains Urike Murmann, pastor at Hamburg's St Katherine's Church. That said, she does believe a dose of showmanship never goes amiss.

"Going to church should be cheerful, it should be fun," she says. "We've seen that people respond very well when we offer music or theatre." But she also knows where to draw the line. "Of course, if it descended into a superficial entertainment, that would be terrible."

Her main emphasis is on the community role of the Church, and she says that it's already learning how to be more aware of parish needs.

"In Hamburg, we look carefully at what our congregation wants and we tailor our activities accordingly. We know we need to do more than just lecture people."

But even though a number of churches across the country are managing to fill their pews by offering a new and improved form of Protestantism, their popularity is failing to translate into Church membership. Attending church is one thing, actually joining is another. And the reasons might be purely mundane. The spirit is willing, one might say, but the flesh is weak.

"The Church tax is a stumbling block," says Murmann. "It's not easy to persuade people it's valid. Furthermore, there's been a growing skepticism towards institutions in recent years. People don't join political parties, they don't join unions. The Church is no exception."

Reformers Turn Up Heat on Church

Critics have been present at World Youth Day, bringing up issues such as the role of women, family planning and gay rights. There are signs that the gap between them and church leaders is narrowing. (19.08.2005)

The Catholic World Youth Day, set to hit Cologne this week with a mammoth influx of devout adolescents, is a chance for German Catholics to show their faith to the world. But just how religious are German youth today? (14.08.2005)

As the financial difficulties of Germany’s mainline churches grow, parishes are increasingly facing the painful prospect of selling off their houses of worship. Some are deconsecrated and become secular establishments. (01.04.2005)