Art Show in Germany Falls Foul of Russian Censorship | Germany | News and in-depth reporting from Berlin and beyond | DW | 23.05.2007

A German exhibition intended to illustrate contemporary art trends in Russia has become a victim of current political realities. 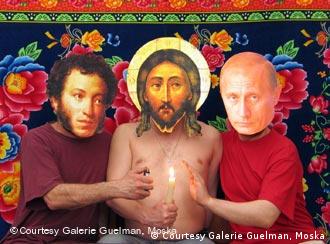 Six works by contemporary Russian artists that were due to appear in an exhibition opening on Wednesday in Dresden's municipal gallery were not allowed to pass through customs.

Three of the pictures are by performance artist Vladislav Mamychev-Monroe. In the photoworks, he portrays himself as a hysterical Adolf Hitler, a plastic-bearded Osama Bin Laden and a cat-loving Pope Benedict.

Two of the other pictures by the Blue Noses group and by Konstantin Latyshev make satirical reference to the Russian president. The Blue Noses pose as Vladimir Putin, Russian cultural idol Alexander Pushkin and Christ. Latyshev's work is a poster that merges the features of the president and Pushkin. 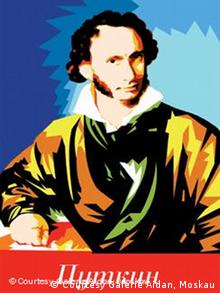 A Putin/Pushkin mutation by Konstantin Latyshev

The Dresden museum has responded to the events by displaying small-scaled reproductions on paper of the works in the spaces where the originals were meant to hang.

Johannes Schmidt, curator of the exhibition called "Learning from Moscow," said he had been informed by the company involved in the transportation of the pictures that customs officers had refused to issue export licences for the art works.

The transport company had been informed that they were not being released for fear of causing international protest.

"I am not really surprised. This exhibition is directly concerned with art that concerns itself with contemporary global themes and with political realities in today's Russia," Schmidt said. "The climate in Russia is getting tougher as the elections approach and relations have also become frostier with Germany recently."

He said the pictures, while clearly a little irreverent in character, were "harmless jokes." Other works by the artists involved have gone on show in Dresden. 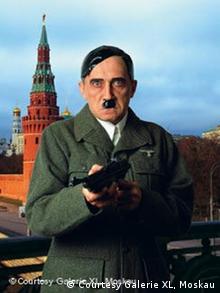 The curator does not believe the export stop was an order that came from above, but came from people at lower levels being overenthusiastic in their desire to please political higher-ups.

"I am not someone who pleads for total freedom for art because that would mean allowing far-right images and child pornography. But apart from that artists should have as much freedom as possible," he said.

"The artists have taken a long time to gain international attention. Collectors are just becoming interested in them. This is putting a brake on this. That has a certain tragic quality," he added.

Recently, a British gallery owner was prevented from taking another picture by the Blue Noses out of the country. It showed the trio of artists donning masks depicting photos of Putin, Bush and Bin Laden. When he legally challenged the move, the work was released.

Schmidt said that the museum had decided not to officially protest against the action because budgetary constraints meant that they would not be able to pay for a second transport.

Peter Sodann is an actor is best known in Germany for playing commissioner Bruno Ehrlicher in the German drama "Crime Scene". He has signed up to the counter demonstration in Rostock. (18.05.2007)

Poland's intellectuals are feeling the heat as the government vows to push through a controversial new law designed to purge communists from public life. But so far, criticism has been faint. (17.05.2007)

Four college students asked a Turkish court on Thursday to revoke the ban of the popular video-sharing Web site YouTube, which was banned over a video allegedly insulting the country's founding father. (08.03.2007)