Art made of destroyed Stasi documents displayed in Berlin

The East German Stasi spied on its citizens, producing countless secret documents. Some were destroyed just before German reunification. Romanian artist Daniel Knorr turned the defaced documents into art with a message. 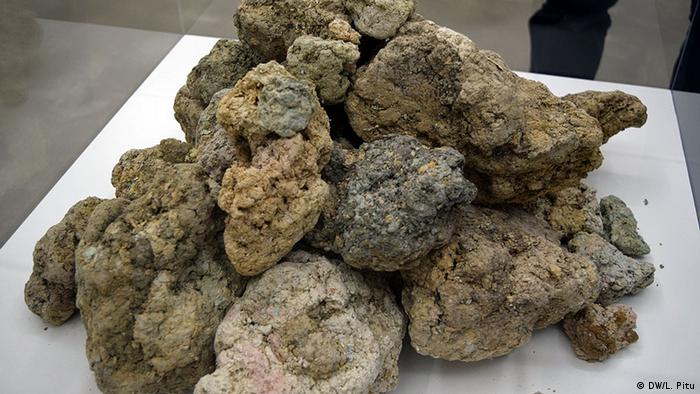 The plain, inconspicuous clumps of cellulose, amassed under a cube made of transparent Plexiglas, are made of Stasi documents that have been shredded, pulverized and mixed with water and oil beyond recognition. The documents, revealing details about East German citizens, were collected by communist East Germany's domestic intelligence service during the last weeks before German reunification.

In the exhibition "State of Mind" in Berlin, artist Daniel Knorr not only brings to light the clandestine destruction of such documents, but also the attempts by the Stasi to shed responsibility for its dark past.

The small Berlin gallery Manière Noire is the ideal location for the straight-forward and painful message of the artist. Artist and gallery owner Majla Zeneli wants to show in her project room how art can make us of language as a medium.

Together with Daniel Knorr and his "STASI stones," she has created what she calls a "triad marred by a dictatorship." At the same time, it's an unusual juxtaposition: the work of a Romanian artist inspired by the destroyed East German Stasi documents and exhibited by an Albanian gallery owner.

Knorr, born in the Romanian capital Bucharest, is familiar with the shrill and painful sounds of the communist dictatorship that he lived through as a child. "The artist is a political person," he said in an interview with DW, adding that "in a particular moment, art, the work, only plays a subordinate role." What counts, in his view, is the political context in which the artist is moving and that, at the same time, drives him.

Zeneli draws from her own experience as well. She was born in the Albanian capital Tirana, and knows about the crimes committed under communist dictatorship all too well. The cellulose clumps formed out of secret documents and micro-films where a few single letters are still recognizable correlate with her conceptual priorities: language, art and communication.

"Talking about a triad makes me feel like in an Italo Calvino novel," said Majla Zeneli, pointing to the STASI stones. "All protagonists, all fates meet in one room - like here," she whispered. 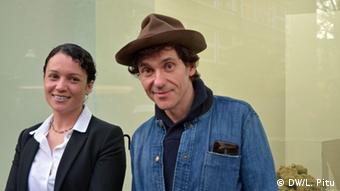 The gallery owner and the artist: Majla Zeneli and Daniel Knorr

Disenchanted and yet frightening

Quite often, secret documents decisively determined the lives of people in communist dictatorships in Bucharest, Tirana or East Berlin. The cellulose clump in shades of gray, blue and pink - that is to say, in the colors of the folders - exudes a disenchanted and harmless atmosphere as it lies under the transparent protective plastic cube. But knowing how much power had been attached to these documents is still frightening.

Ultimately, the STASI stones, Majla Zeneli tells DW, are not only a warning of the obscure ploys of secret services, but also a wake-up call for society to uncover such activities.

The STASI stones only constitute one part of Knorr's work, "State of Mind." The second part is a miniature model of a Soviet tank on a stand in the Leipzig Stasi Museum. Secret documents are attached to the cannon of the tank, including a pamphlet written by three students in 1968, informing the East German population about the invasion of "brotherly" Warsaw Pact armies in Prague. It's left up to the museum visitors to speculate about the further fate of these three courageous girls.

"State of Mind" (2007) by Daniel Knorr is part of the art collection of the Erste Bank Group and Erste Stiftung. The works of the Berlin-based conceptual and performance artist have been shown in the Museum of Modern Art, Warsaw (2013), the Centre Pompidou, Paris (2010) and during the 5th Berlin Biennale (2008). Solo exhibitions were also shown in the Kunsthalle Wien, Vienna (2013) and in the Fridericianum, Kassel (2008). Furthermore, Knorr created the Romanian pavilion during the 51st Venice Biennale (2005).