Art aboard: Jean Tinguely's works set sail on a barge

Works by the Swiss sculptor, who was known for making art from scrap metal, will be on display on a barge. The Tinguely Museum in Basel is sending the works on a European voyage by boat. 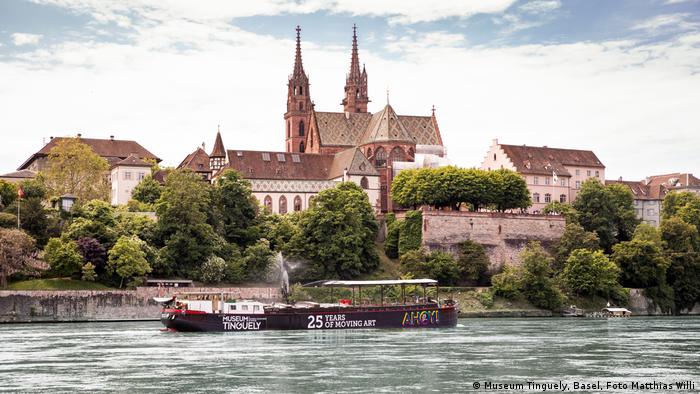 Renowned Swiss sculptor, Jean Tinguely (1925 – 1991), was best known for his kinetic art sculptural machines that satirized automation and the technological overproduction of material goods, creating moving, turning machines that served no purpose other than art.

Unsurprisingly, this notion of interpreting movement is a core component of Museum Tinguely's 25th anniversary celebration this summer. A special exhibition called "Museum Tinguely AHOY!" will see his works loaded onboard a converted barge that will sail and dock at places that were significant to the artist's career.

Over the course of three months, the MS Evolutie will bring Tinguely's art to the people, from Paris to Antwerp and Amsterdam, and from there upriver through the urban centres of the Rhine-Ruhr region and back to Basel.

This floating museum spanning 100 square meters (1,076 square feet) will feature replicas of smaller works by Tinguely, including sketches and videos. They show how the master of kinetic sculpture turned scrap metal into his cheerful, tongue-in-cheek, consumer-critical art. Biographical material will also be on display.

Sitting on the barge's deck and visible from afar will be the Tinguely fountain called Schwimmwasserplastik from 1980 – a large, rotating, water-spouting piece. 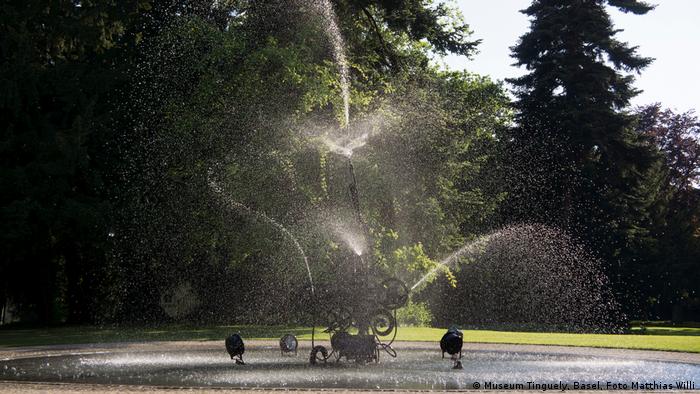 Tinguely's Schwimmwasserplastik sculpture in action in Basel's Solitude Park in 1980

"Tinguely himself took his art on the road, and our museum is located directly on the Rhine waterway," says Roland Wetzel, director of the Tinguely Museum. Thus, a barge made it possible to transport a small museum, housing an exhibition and an educational program. "The idea was obvious," Wetzel told German public broadcaster SWR. The Museum Tinguely, in his native Basel, has been honoring the artist's work for 25 years.

Paris, the starting point of this nautical journey, was the place where Tinguely's career began. The then 28-year-old trained window dresser set off for the center of European post-war art in 1953, and made contact with artists, gallery owners and exhibition organizers. He became friends with artist Yves Klein, and with the well-connected curator Pontus Hulten, who from then on championed Tinguely's moving objects. 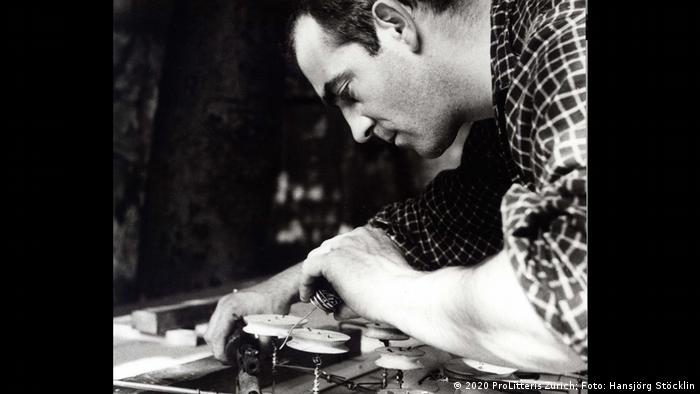 Paris was also where he held the most solo and group exhibitions, and where he met artist Niki de Saint Phalle, who later he would marry in 1971.

In Antwerp, Tinguely participated in important exhibitions in the late 1950s, including the avant-garde show "Vision in Motion – Motion in Vision" at the Hessenhuis. His works have proven to be popular for decades in Amsterdam's Stedelijk Museum, which hosted a monumental retrospective entitled "Machine Spectacle" in 2016/2017.

Tinguely's first solo exhibition in Germany was held at the Galerie Schmela in Düsseldorf in 1959, while in Duisburg he was awarded the Wilhelm Lehmbruck Prize in 1976.

Jean Charles Tinguely was born on May 22, 1925, in Fribourg near Basel, the only child of a maid and a warehouse worker. In the course of his life, he created countless imaginative junk machines. His art was radical, occasionally subversive, but certainly always in motion. 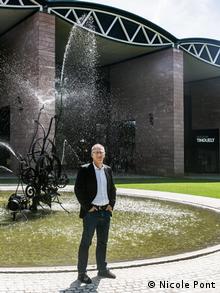 In 1959, for instance, he dropped 150,000 copies of his manifesto Für Statik (For Static) on the German city of Dusseldorf and its suburbs. This action clearly was in referance to the dropping of propaganda leaflets during the Second World War.

"Everything is moving. There is no such thing as standstill," read the manifesto. "Build cathedrals and pyramids that crumble like candy! Breathe deeply, live in the now, live on and in time. For a beautiful and absolute reality!"

It is not only Tinguely's anarchic playfulness that inspires his admirers to this day. "His significance lies in the fact that he connected art with life," says Wetzel. He took on essential themes of our existence – such as the relationship between man and machine, or his criticism of excessive consumption.

The floating Tinguely Museum will begin its three-month anniversary tour on July 17.

Adapted from German by Brenda Haas